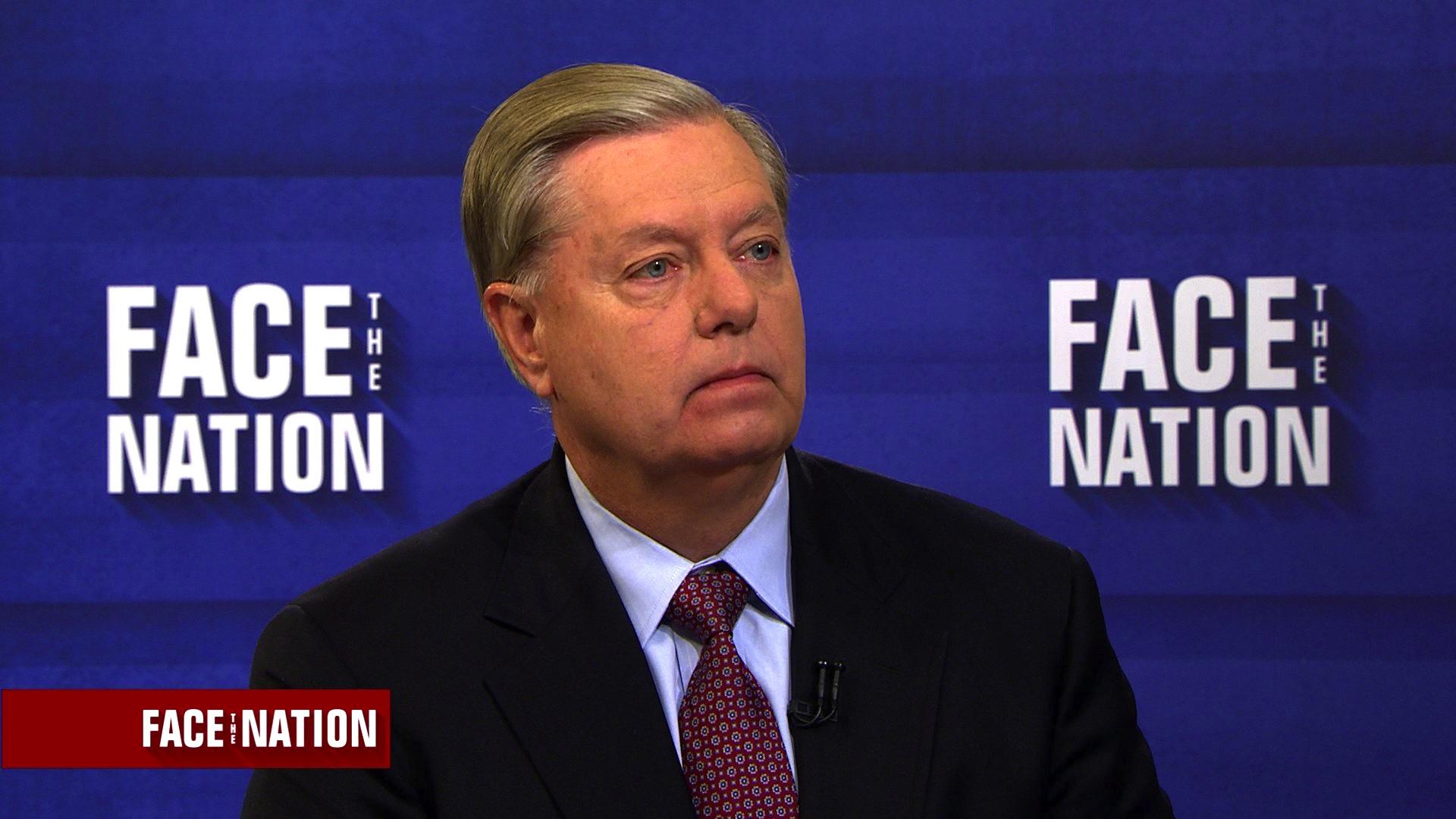 What follows is a transcript of the interview with Graham, which aired Sunday, October 15, 2017, on "Face the Nation."

JOHN DICKERSON: Senator, let's start with the Iran questions to move to Congress. Are there enough votes there to get this amendment to the Iran deal?

SENATOR LINDSEY GRAHAM: Yeah, I don't know. I hope so. I'd hate to be a Democrat defending the Sunset Clause. Under this agreement, under 15 years, the Iranians can do anything they want in terms of enrichment and reprocessing. It doesn't matter if they're still the largest state sponsor of terrorism, it doesn't matter if they're building ICBMs with, "Death to Israel" on the weapon. Under mere passage of time, they can do whatever they want to with enrichment. I think Democrats are going to have a hard time justifying denying inspections of military bases.

JOHN DICKERSON: Here's what- here's how they would justify it. They would say that, in fact, the Sunset provisions are stacked so that they can't move right to a nuclear weapon. And that if they started to, there are inspectors in there watching and the international community would be on them right away. Whereas what the president is offering is getting out of an agreement that was worked patiently with the international community, and actually is a step backwards.

SENATOR LINDSEY GRAHAM: Well I- The president ran on the idea this is a bad deal for America and he won. He's fulfilling a campaign promise. This is a terrible deal for America and the region. The Arabs don't like it, the Israelis don't like it. You're wrong about the Sunset Clause, with all due respect. There is no limitation on centrifuge reprocessing and enrichment.

There is no requirement that they stop marching toward a bomb. With the mere passage of time, they can do anything they want to. And you can't go on military bases because the Iranians say we can't. And they're doing ICBM testing in violation of UN resolutions. They hijacked Americans on the high seas. They're still the largest state sponsor of terrorism. To those who said this deal would make Iran a better member of the family of nations, it was a miserable failure.

JOHN DICKERSON: Well, there is debate about you don't just need the centrifuges, you need other parts of the process. And those have longer sunset periods--

SENATOR LINDSEY GRAHAM: You may think the Sunset is a good deal. I don't.

JOHN DICKERSON: Well, let me ask you this question about your Senate colleague, Senator Corker. The chairman of the foreign relations committee, has sketched a view of the administration. Do you agree with it?

JOHN DICKERSON: Senator Corker has also expressed a view about the secretary of state. Says the president is castrating him. Do you agree with that view?

SENATOR LINDSEY GRAHAM: No. I don't agree with that. I played golf with the president-

JOHN DICKERSON: Is he being unpatriotic in suggesting that case then?

SENATOR LINDSEY GRAHAM: No. I just think he's wrong. I like Bob Corker. It breaks my heart that he's leaving. He's one of the most valuable members of the Republican Conference. He and the president have gotten into this Twitter war. At the end of the day, I played golf with the president yesterday. He is not a man under siege. He beat me again, like a drum. We had a good time.

JOHN DICKERSON: Let me- This isn't just a Twitter war. This is the foreign relations chairman making a claim about the president, his ability to be convinced by his national security people. The president could fix that. If Senator Corker thinks that Rex Tillerson is being castrated, the president has the power to fix that. Should he?

SENATOR LINDSEY GRAHAM: Well, at the end of the day, I think Secretary Tillerson gave a good overview of the relationship. I'm not here to beat up on Bob. I'm here to tell you that the president has changed his opinions when it came to Afghanistan by listening to the best national security team I've seen in 20 years.

Secretary Tillerson is serving the president well. But the people around the president are the smartest guys I've seen and gals on national security since I've been in town. He's adjusting his policies on Afghanistan. He's keeping his promise to try to get a better deal with the Iranians. And he's finally putting North Korea on notice that the policy of the United States is changing.

JOHN DICKERSON: All right, we're going to hold there for a moment, Senator. We need to take a short break. We'll be back in a minute with more from Senator Graham.

JOHN DICKERSON: And we're back with Senator Lindsey Graham. Senator, the president this week said he's not going to continue payments to insurance companies to help with people at the lower end of the income scale pay for their health insurance. A number of health organizations have come out and said, "Congress has to do something to fix this." Is Congress going to do something?

SENATOR LINDSEY GRAHAM: Well, I hope that we can get a deal between Senator Alexander and Patty Murray that would allow us to continue the payments, but get reform. But this is stopping payments to insurance companies. Aetna's had a 470% increase in their stock prices since the ACA. Cigna, 480%. Humana, 420%.

The president is not going to continue to throw good money after bad, give $7 billion to insurance companies unless something changes about Obamacare that would justify it. He did talk to Senator Alexander yesterday. He's encouraging him to get a bipartisan deal that would have some flexibility that Title One mandates for continuing payment. But it's got to be a good deal.

JOHN DICKERSON: The president's put a lot on Congress' plate. There's the question of the dreamers, there's now this health care, there's Iran, you've got to get a budget passed in order to set up tax reform. Are you going to get tax reform done?

SENATOR LINDSEY GRAHAM: Yeah, if we don't, we're dead. You're going to ask me about Bannon, so I'll just go and ask myself.

SENATOR LINDSEY GRAHAM: Yea so what's going on? It's a symptom of a greater problem. If we don't cut taxes and we don't eventually repeal and replace Obamacare, then we're going to lose across the board in the House in 2018. And all of my colleagues running in primaries in 2018 will probably get beat. It will be the end of Mitch McConnell as we know it. So this is a symptom of a greater problem. If we do cut taxes and we do repeal and replace Obamacare, it doesn't matter what Bannon do because we'll win.

JOHN DICKERSON: But Steve Bannon has said that Republicans should go to war against Mitch McConnell. That all y'all should get rid of him and that that should be the Republican rallying cry.

JOHN DICKERSON:Is Steve Bannon a big problem or a little problem in trying to get anything done? He's saying everything you're doing is going against the cause.

SENATOR LINDSEY GRAHAM: He's a symptom of a problem. Bannon can't beat us if we're successful. And if we're not successful, it doesn't matter who tries to beat us, they'll be successful.

JOHN DICKERSON: All right, Senator Graham, thanks for being with us-

JOHN DICKERSON: and we'll be back in a moment.