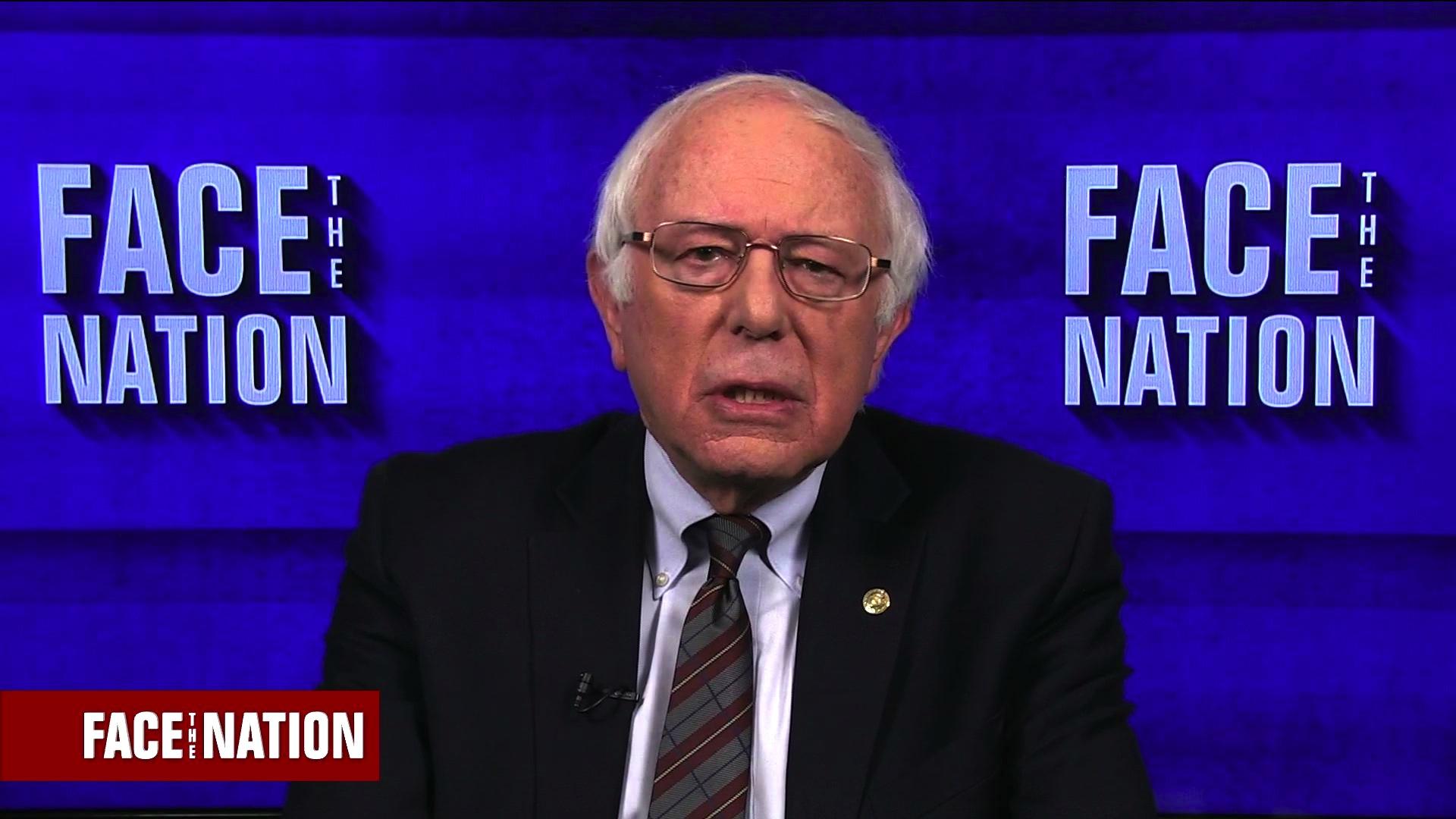 Republican leaders in Congress plan to bring their massive tax overhaul to a final vote in both chambers this week after negotiators reached an agreement addressing the concerns of several key Senate holdouts. The final version cuts tax rates for corporations and high-income households while eliminating some popular deductions and overhauling the tax code.

Sen. Bernie Sanders, an independent from Vermont, has been one of the most outspoken critics of the measure, blasting it as a giveaway to corporations and wealthy Americans. He joined "Face the Nation" to discuss his evaluation of the plan and react to the surprising victory of Democrat Doug Jones in this week's Alabama special election for the Senate.

What follows is a transcript of the interview with Sanders that aired Sunday, Dec. 17, 2017, on "Face the Nation."

JOHN DICKERSON: And we're joined now by Vermont Independent Senator Bernie Sanders. He's in Burlington, welcome Senator. This looks like it's going to get passed through the Senate and the House and signed by the president, this tax cut bill. Is there anything more that opponents like you could have done to stop this?

BERNIE SANDERS: Well I think we did everything that we could -- but at the end of the day what you had is people like Mr. Mnuchin, who himself is worth three or four hundred million dollars, or the president of the United States who is worth several billion dollars, as you mentioned, some four or five thousand lobbyists doing everything that they could to write a bill which significantly benefits the wealthiest people in this country and the largest corporations. The latest analysis that we have seen suggest that 72 percent of the benefits go to the top 5 percent. My guess is that 60 percent of the benefits will go to the top 1 percent and at the end of the decade because the benefits for the middle class are temporary while- while the corporate benefits are permanent, at the end of the decade over half of the middle class will be paying more in taxes. What we are seeing here is a real massive attack on the middle class and what I worry very much, John, is that if you listen to what the Speaker of the House, Paul Ryan is talking about, what he is saying is that as a result of this bill, the deficit will go up by $1.4 trillion dollars. And what Ryan, in my view, will come back with are massive cuts to Social Security, Medicare and Medicaid, in order to offset that deficit-

JOHN DICKERSON: Let me ask yo-

BERNIE SANDERS: So massive tax breaks for the rich, cuts to Social Security, this is a grossly unfair tax bill.

JOHN DICKERSON: I want to get to the entitlements in- in just a moment. But on that question of the middle class, what the administration says and what Republicans say is that yes, those tax cuts expire for the middle class, but knowing politics as they do that nobody's going to vote to have- let them expire, that those will essentially be kept. That seems pretty reasonable in-in the way Washington works. So is it really fair to say they're--

JOHN DICKERSON: --going to-- go ahead.

BERNIE SANDERS: Well, they are. I mean, the- the way this bill is written is the tax breaks for corporations are now permanent. Why weren't the tax breaks for the middle class made permanent? Because it has to do with the priorities of the folks who wrote that legislation. And their job is to represent multinational corporations and not working families. That's where we are today.

JOHN DICKERSON: Let me- Let me ask you. There's a lot of talk about politics here. If the Democrats take control of the Senate, and you caucus with the Democrats, what's the promise to America about what will be done to reverse the state of affairs that you're so unhappy with?

BERNIE SANDERS: Look. At a time of massive income and wealth inequality where the people on top and large corporations are doing phenomenally well our job is to pay attention to the needs of working families. We talk about a childcare tax credit in this bill. Truth is that depending on where you live in America good quality child care can cost $12, $15, $20,000 a year. Our job is to move to universal childcare so that every working family in this country knows that their kids have good quality care.

Right now, John, this is really quite unbelievable. While the Republicans are spending all of their time providing massive tax breaks to the rich, there has been no public discussion about the DREAMers, the needs of the DREAMers. 800,000 young people born and raised in America,

BERNIE SANDERS: What about the CHIP program?

JOHN DICKERSON: Right. Let me get--

JOHN DICKERSON: Let me get to that in a second. But if you- Democrats take control, are corporate taxes going up?

BERNIE SANDERS: I think we're going to take a very hard look at this entire tax bill and make it a tax bill that works for the middle class and working families. Not for the top 1% and large multinational corporations.

JOHN DICKERSON: But there's no question that in order to achieve all of the things you want taxes are going to have to go up on corporations. If they're down to 21 as a result of this legislation, you can't find the money anywhere else.

JOHN DICKERSON: All right. Let's go on to now the budget and spending question. The Republicans, when Democrats have said, "Medicare is going to have to be cut because of the so-called Pay-Go rules," what Republicans say is, "Democrats are going to waive those rules next year, that those Pay-Go rules are always waived. And so it's kind of a false attack to say that they are going to be automatic cuts for Medicare." Your response?

BERNIE SANDERS: No. It is not a false attack, John. It's simply listening to what the speaker of the House has said. And what he has said is after they do this tax bill the next order of business is so-called entitlement reform. And please understand that when Republicans talk about entitlement reform what they are talking about are massive cuts to Medicare, Medicaid, and Social Security in the budget that they already passed.

They proposed a trillion-dollar cut to Medicaid, which would be disastrous to people who have loved ones in nursing homes, for children, and for working families who are on Medicaid. This is what they have already proposed. So they are going to come back in my view in order to offset this deficit with terrible cuts to Social Security, Medicare and Medicaid.

JOHN DICKERSON: So that's slightly different though than following through on the restrictions created by Pay-Go, which they say you'll waive. But let me ask you this question about the spending bill. Keep the government open. What's your message to Democratic leaders about how and what they should fight for in terms of funding the government?

BERNIE SANDERS: Look. Right now it is no secret that the middle class is hurting. The Republicans have been unable to reauthorize, for example, the community health center program providing healthcare to 27 million Americans. The CHIP program. The Children's Health Insurance Program. They have ignored the fact that for three months the CHIP program for 9 million children in this country has not been funded.

We have a crisis in pensions in this country. A million and a half hardworking people who were promised their pensions are going to see their pensions reduced by 50 or 60 percent. We have a rural infrastructure crisis where people can't even get broadband. We have 30,000 vacancies in the Veterans Administration that have not been filled. Our job is to take care of the needs of working families and the middle class. Not just worry about the 1 percent. So I believe that as we talk about the new spending bill those are the issues we must demand that Republicans address.

JOHN DICKERSON: All right. We're out of time, senator. Thanks so much for being with us. And we'll be back in one minute.