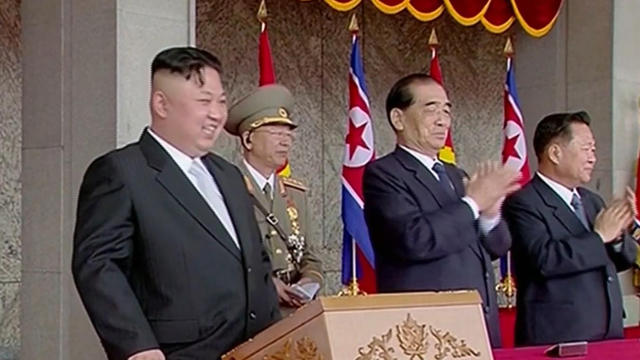 Members of the Senate were bussed from Capitol Hill to the White House where they were briefed by Secretary of State Rex Tillerson, Defense Secretary James Mattis, Chairman of the Joint Chiefs of Staff Gen. Joe Dunford and Director of National Intelligence Dan Coats on a review of the U.S. policy toward North Korea.

"The president's approach aims to pressure North Korea into dismantling its nuclear, ballistic missile, and proliferation programs by tightening economic sanctions and pursuing diplomatic measures with our allies and regional partners," the four officials said in a joint statement.

They said they're engaging with members of the international community to "increase pressure on the DPRK in order to convince the regime to de-escalate and return to the path of dialogue" and signaled that the U.S. is open to negotiations.

"The United States seeks stability and the peaceful denuclearization of the Korean peninsula. We remain open to negotiations towards that goal. However, we remain prepared to defend ourselves and our allies," they said.

Sen. Chris Coons, D-Del., told reporters afterward that it was a "sobering briefing" in which it was made clear how much thought and planning is going into preparing military options if called for and proportional diplomatic strategy to respond to the North Korean threat.

Asked if the U.S. is prepared to strike North Korea, Sen. David Perdue, R-Ga., said, "I think there's a lot to happen before that's even to be considered."

Separately, a senior administration official told reporters, "What you've seen is really an integrated effort to prioritize diplomatic and informational aspects of national power. But also, what you'll see soon is using the economic dimension of national power as well as the military preparations that are underway."

The briefing comes a day after a U.S. guided-missile submarine arrived in South Korea and envoys from the U.S., South Korea and Japan met in Tokyo as North Korea marked the anniversary of its military's founding. Earlier this month, the U.S. had been considering military options against North Korea as it anticipated a missile launch. North Korea later attempted to launch a missile, but it failed.

A CBS News poll released Wednesday found 61 percent of people in the U.S. think North Korea's development of weapons is a threat that can be contained. Slightly over a quarter say it is a threat that requires military action now.