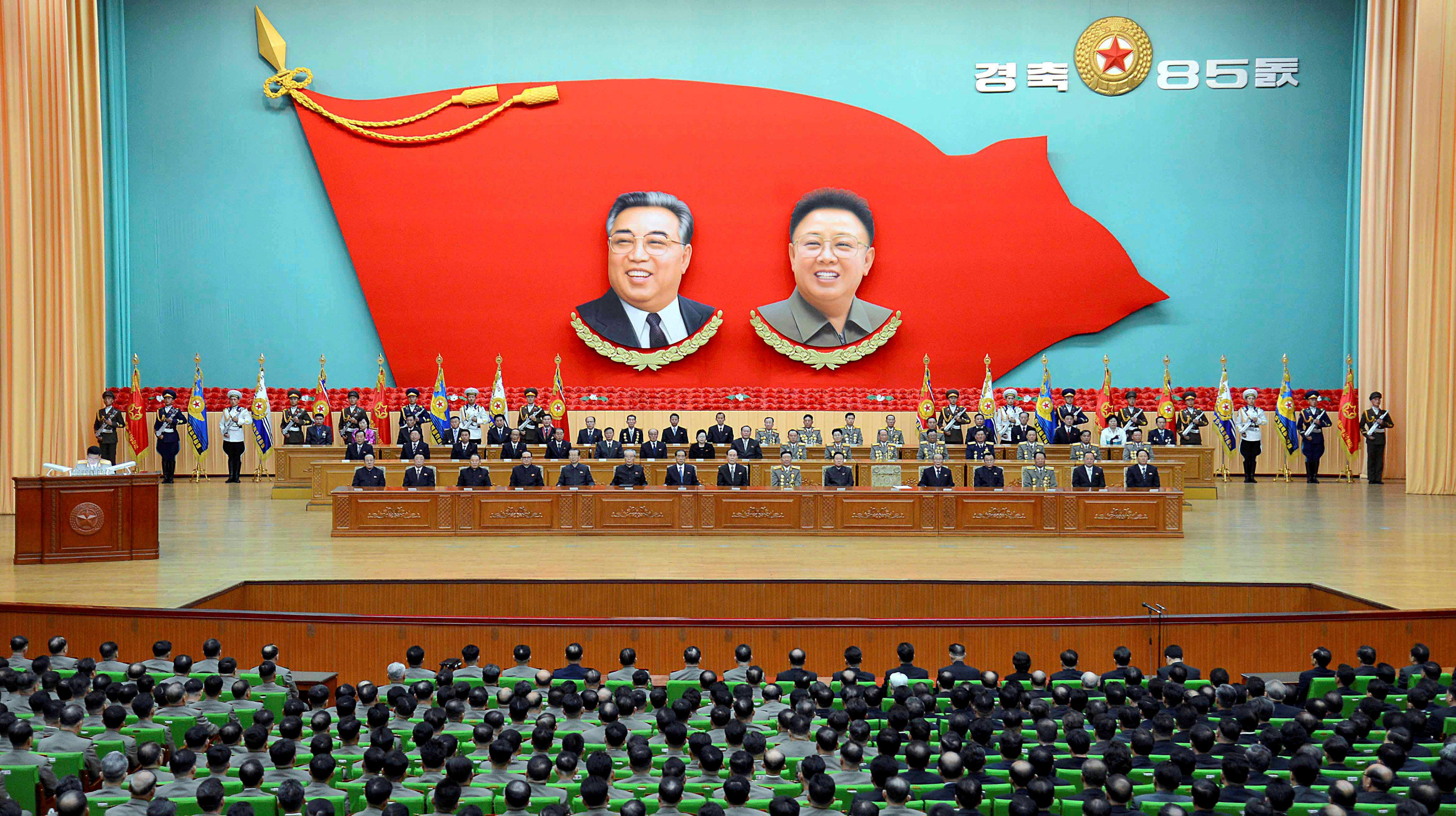 PYONGYANG, North Korea -- A U.S. guided-missile submarine arrived in South Korea Tuesday and envoys from the U.S., Japan and South Korea met in Tokyo as North Korea marked the anniversary of the founding of its military.

Though experts thought a nuclear test or ballistic missile launch was possible around the anniversary, the morning came and went without either. South Korea’s Yonhap news agency, citing a South Korean government source, reported that North Korea instead appeared to have held a major live-fire drill in the Wonsan city area.

Crowds in Pyongyang, the North Korean capital, laid flowers and paid respects at giant statues of the country’s former leaders Kim Il Sung and Kim Jong Il, a day after the minister of defense reiterated the assertion that North is ready to use pre-emptive strikes or any other measures it deems necessary to defend itself against the “U.S. imperialists.”

“The situation prevailing on the Korean peninsula is so tense that a nuclear war may break out due to the frantic war drills of the U.S. imperialists and their vassal forces for aggression,” Gen. Pak Yong Sik said at a “national meeting” of thousands of senior military and civilian officials.

A ruling Chinese Communist Party newspaper warned North Korea Tuesday against conducting another nuclear test, saying that would likely propel events past the “point of no return.”

In an editorial, the Global Times said the previous day’s phone conversation between Presidents Trump and Xi Jinping of China showed the two countries were in close communication over the tensions.

It said China hopes for a peaceful outcome, but that Beijing has “very limited influence on the entire situation.”

It said, “The game of chicken between Washington and Pyongyang has come to a breaking point.” The paper is known for its often stridently nationalistic views.

The newspaper said if North Korea carries out a sixth nuclear test as expected, “It is more likely than ever that the situation will cross the point of no return. All stakeholders will bear the consequences, with Pyongyang sure to suffer the greatest losses.”

As a traditional ally and North Korea’s chief source of trade, food and fuel aid, China has come under intense pressure to use its influence to dissuade Pyongyang from additional nuclear tests and missile launches.

However, Beijing is intensely wary of any measures that might cause the collapse of North Korean leader Kim Jong Un’s hard-line communist regime, fearing that could lead to a wave of refugees and a Pyongyang government beholden to Washington and Seoul.

The streets of Pyongyang were quiet Tuesday. Flower-laying and bowing at statues and portraits of the leaders is a regular routine on major anniversaries. Groups of people also gathered in open spaces around the city to take part in organized dancing sessions, another common way of marking holidays in North Korea.

“Our great leaders founded and wisely led our revolutionary army, and just like that, now our respected Marshal Kim Jong Un is leading wisely, so even though the situation is tense, we are celebrating the day,” said Choe Un Byol, who had come with his family to the bronze statues of the former leaders.

The nuclear-powered USS Michigan submarine arrived at Busan in what was described as a routine port visit to rest the crew and load supplies. Cmdr. Jang Wook from the South Korean navy public affairs office said there is no plan for any drill.

The submarine’s arrival comes as the USS Carl Vinson aircraft carrier heads toward the Korean Peninsula for a joint exercise with South Korea around the weekend.

Despite the buildup, Mr. Trump has reportedly settled on a strategy that emphasizes increased pressure on North Korea with the help of China, the North’s only major ally, instead of military options or trying to overthrow North Korea’s government.

Mr. Trump has told ambassadors from U.N. Security Council member countries that they must be prepared to impose additional and stronger sanctions on North Korea.

“This is a real threat to the world, whether we want to talk about it or not,” Mr. Trump said at a White House meeting Monday. “North Korea is a big world problem, and it’s a problem we have to finally solve. People have put blindfolds on for decades, and now it’s time to solve the problem.”

Nikki Haley, Mr. Trump’s U.N. ambassador, said the U.S. isn’t looking for a fight with Kim and wouldn’t attack North Korea “unless he gives us reason to do something.” She praised China’s increased pressure on North Korea.

Asked about the threshold for U.S. action, Haley told NBC News, “If you see him attack a military base, if you see some sort of intercontinental ballistic missile, then obviously we’re going to do that.”

But asked what if North Korea tests an intercontinental missile or nuclear device, she said, “I think then the president steps in and decides what’s going to happen.”

Japan’s Foreign Ministry also announced that China’s envoy for North Korea, Wu Dawei, is arriving in Tokyo on Tuesday for talks with Kanasugi, which may take place later this week.