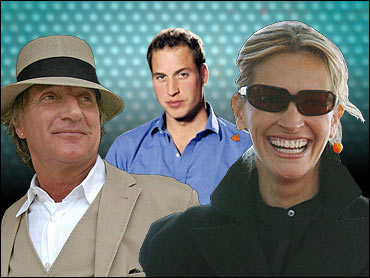 Blissful events decorated the calendar this week as babies were born, birthdays were celebrated and rings were exchanged along with wedding vows.

The baby stork was working overtime this week as three more celebrity offspring were welcomed in to the world.

America's sweetheart Julia Roberts added a third child to her brood (twins Phinnaeus and Hazel will be 3 in November) when Henry Daniel was born on Monday in Los Angeles. On the same day, Tiger Woods and his wife, Elin, welcomed baby daughter Sam. The news couldn't come soon enough for the golfer who came in second at the U.S. Open on Sunday.

"King of Queens" alum Kevin James and wife Steffiana had their second child, a girl they named Shea Joelle.

A few more celebrities pledged monogamy this week. Musician Rod Stewart took his third trip down this aisle in the Italian Riviera. The rocker wed model Penny Lancaster, his longtime girlfriend with whom he has a son named Alastair. It was a small civil ceremony attended by only the couple's inner circle.

On another Riviera, Tom Cruise and Kate Holmes were in attendance at the wedding of their pals, media mogul James Parker and Erica Baxter on June 20. The bride walked down the aisle in a lavish $100,000 John Galliano dress, as some 100 guests looked on.

Judge Larry Seidlin, whose Broward County courtroom was at the center of the Anna Nicole Smith body battle in February, announced this week that he is leaving the bench. In his resignation letter, Seidlin said he planned to spend more time with his family. There are also whispers that Seidlin is shopping around a new television show.

When is it official that you've made your mark on society? When you get your own action figure. Hasbro announced that comic book legend Stan Lee will soon be immortalized in plastic. Lee's limited edition toy will reportedly be released next month.

Dashing Prince William celebrated a quarter century of life on the planet on Thursday. His birthday comes just days before his mother's 46th birthday on July 1. This year, the 10th anniversary of her death, William and his brother, Harry, are planning the "Concert For Diana," a musical tribute featuring some of their mother's favorite acts, including Duran Duran and Elton John.

Actress Nicole Kidman received a big surprise for her 40th birthday on Wednesday — her husband. Country singer Keith Urban ditched his tour and surprised his wife, who is in Australia shooting her latest film.

On Monday the couple will celebrate another landmark day: their first wedding anniversary.