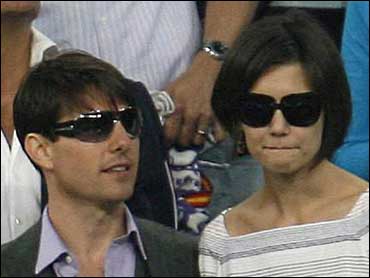 The couple wed in a civil ceremony at the Antibes Hotel de Ville, witnessed by a small circle including the groom's mother, Ros, and the bride's parents, Sheelah and Michael Baxter.

They then returned to the nearby Hotel du Cap Eden Roc on the Cote d'Azur for the main event, where the bride wore a traditional, white flowing floor-length strapless gown. The $100,000 dress was a haute couture creation by John Galliano Fairfax, newspapers reported.

Guests stood on either side of the white-carpeted aisle, with some sheltering from the bright summer sun under umbrellas, to witness the couple wed under a canopy. Cruise and Holmes had front-row seats and held hands through the ceremony, Hello magazine reported.

Afterwards, the reception began in the hotel overlooking the Mediterranean.

Reuters reported that the newlyweds were expected to honeymoon on their private yacht, the same one TomKat honeymooned on in 2006.