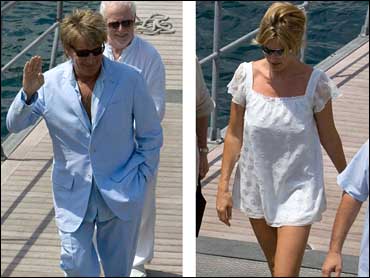 British rocker Rod Stewart married model Penny Lancaster in a private ceremony Saturday on the Italian Riviera, in front of 100 friends and family members at a cloistered medieval abbey at La Cervara near Portofino, Italy, his record label confirms in a statement.

A reception followed overlooking the coast of Santa Margherita Ligure, just outside the posh Portofino resort on Italy's northwestern coast.

Dinner, dancing, and fireworks lasted until the early hours as the newlyweds left on a Mediterranean holiday.

It was the third wedding for the 62-year-old rocker, best known for hits like "Do Ya Think I'm Sexy?" and "Maggie May." Stewart and Lancaster, 36, have a one-year-old son together.
View CBS News In
CBS News App Open
Chrome Safari Continue
Be the first to know
Get browser notifications for breaking news, live events, and exclusive reporting.