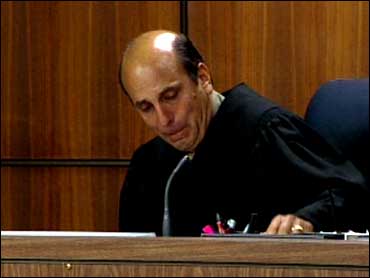 Broward Country Judge Larry Seidlin, the judge who made the decision about where Anna Nicole Smith's body would be laid to rest, is calling it quits after 30 years on the bench, CBS 4 in Miami-Fort Lauderdale reports on its Web site.

"As a judge, I have been deeply touched by the thousands of children and families that have come before me to share their struggles in juvenile, family, and probate court," Seidlin writes, "and I hope by working together we made a positive difference in their lives."

During the custody hearing over Smith's remains, the spotlight shown on Seidlin when he cried as he read his verdict.

Anna Nicole Smith: A Who's Who

"It is now time for me to devote more of my daily life to my own young family," Seidlin writes, "and to pursue the many opportunities that have been offered to me outside the judicial system, and I have disregarded until now."

On Feb. 22 Seidlin ruled that a guardian for Smith's daughter, Dannielynn, would decide where the model would be buried but suggested that she be buried next to her son, Daniel.

Smith was buried in the Bahamas on March 2.