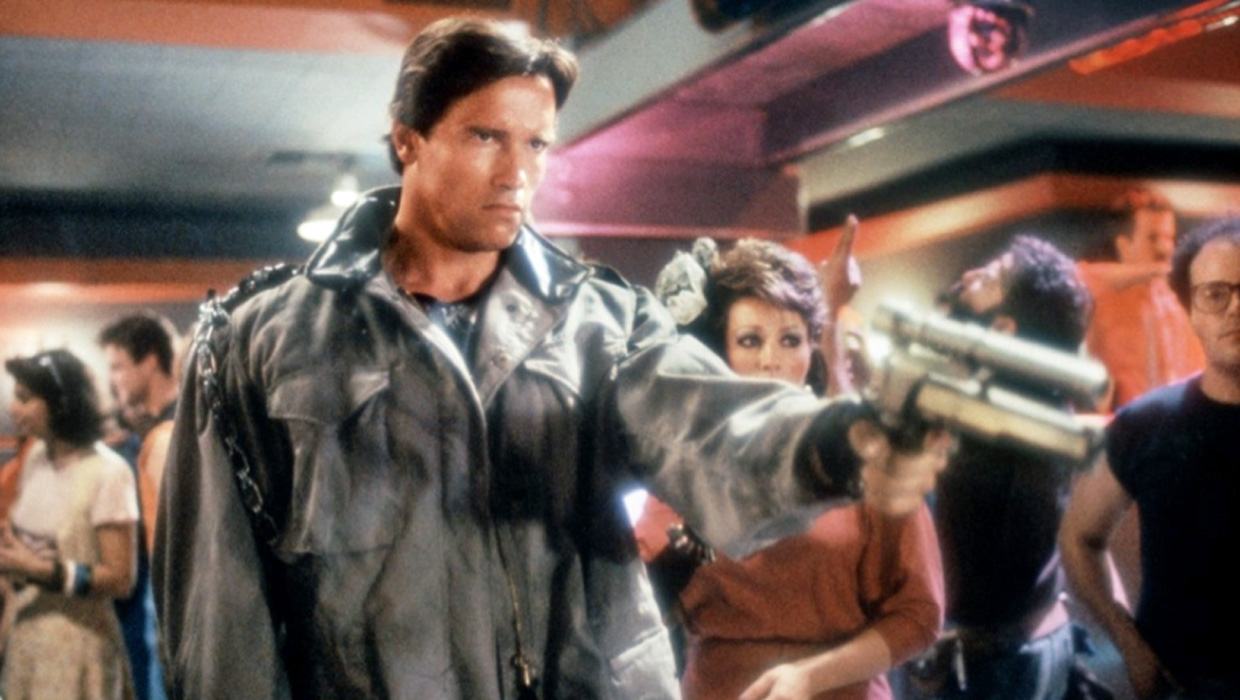 Remember when the 21st century seemed like an eternity away?

In the latter half of the last century, Hollywood got pretty imaginative guessing what awaited us in the near-future, with ray guns or hoverboards or some other gadget that is still, in 2014, years or decades away from even having the chance of becoming commonplace.

Some of these films, like 1989's "Back to the Future Part II" (which depicted flying cars as a popular form of transportation in the year 2015) took an optimistic approach, while others (take 1982's grim "Blade Runner") held a more dystopian view -- as was certainly the case with one of the most ground-breaking sci-fi films of that era, 1984's "The Terminator."

It was conceived as a low-budget flick that would quickly be forgotten (with almost no expectations from the studio that it would ever become a success), but "The Terminator" has defied just about all predictions over the last three decades.

The film -- about a cyborg (Arnold Schwarzenegger) who travels back in time from the year 2029 to 1984 to kill a waitress (Linda Hamilton) who will one day be the mother of an influential leader -- spawned a lucrative franchise which includes three sequels (with a new fifth installment on the way), a TV series and loads of tie-in merchandise.

"The Terminator" also helped bring A-list status to Schwarzenegger and a then-unknown filmmaker named James Cameron, who up until that point had directed only one other feature -- 1981's "Piranha Part Two: The Spawning."

"'Terminator' was an idea that I had when I was in Rome," Cameron said in a 1992 interview for a behind-the-scenes special on the film. "I was sitting around basically in my hotel room, I was sick at the time, I had a real high fever. I was just lying on my back thinking and I came up with all this bizarre imagery."

Being alone in a foreign city, Cameron was inspired to create characters from the future who were "out of sync, out of time, out of place."

The young filmmaker eventually returned to the U.S. and began writing the screenplay, all the while living inside his car. Cameron sought assistance with the script from future "Walking Dead" producer Gale Ann Hurd, who would later become his wife in 1985 (the couple divorced in 1989, and she wouldn't be the last familiar face from the film to marry Cameron).

In the story, the Terminator's efforts to kill Sarah Connor are thwarted by Kyle Reese, a human also sent from the future to protect her. Reese is the biological father of Sarah's son, John Connor -- Reese's eventual commander in the fight against the sentient machines.

Actor Michael Biehn -- who would work with Cameron again on 1986's "Aliens" -- was cast as Reese, although he came very close to not getting the part over a misunderstanding.

"Michael came in to read for us and he gave the best reading of any of the actors that we'd seen, but it was with a Southern accent," Cameron explained. "We talked to his agent, said very politely, 'Michael's very good, but we really don't want him to seem so specific, that he comes from the South. Because he's from the future. We don't want it to be that specific. And the agent said, 'What accent? He doesn't have an accent.' It turned out that he'd been reading for 'Cat on a Hot Tin Roof' that morning of the reading and he hadn't shaken the accent."

The actor gave another audition, sans accent, and was almost immediately given the role. Biehn, now 58, admits that he shares few similarities with Reese.

"I'd be running the other direction if a Terminator was coming for me so I'm not like that in real life at all. I'm a lover not a fighter," Biehn said in February while appearing at a New Orleans Comic Con event with his co-star Hamilton, who divulged that she too had some difficulty securing her role.

Both Biehn and Hamilton described the "Terminator" shoot as exhausting, with Cameron pushing them to their physical limits as they filmed along the dilapidated streets of downtown Los Angeles.

"I finished the film and I thought 'That director is on the side of the machines, he is not on the side of the human beings," Hamilton said, although she eventually came around and forgave him. "It's amazing what after-sight will give you."

Cameron and Hamilton would go on to have a tumultuous off-screen romantic relationship over the years. In 1993, she gave birth to their daughter, Josephine. The couple later married in 1997 but divorced in 1999.

Aside from Cameron, Hamilton says that another reason she had initial doubts about "The Terminator" was due to the lead star.

"I had my question marks about this film because it was Arnold. I can say that now because he's proven me wrong," she admitted.

Before the release of the film, Schwarzenegger was primarily known as more of a bodybuilder than a movie star. That all changed when he stepped into the role of the homicidal cyborg.

As with Biehn and Hamilton, Schwarzenegger also described the shoot as an intense process. Because of budget issues, Cameron and Schwarzenegger had to stealthily film some outside scenes because there wasn't always enough money to afford shooting permits. The heavy robotic make-up, designed by the legendary effects artist Stan Winston, also took its toll on the action star.

Cameron and Schwarzenegger spent a lot of time going over the Terminator's mannerisms prior to filming. Both men agreed that the cyborg should have a smooth quality to his movements, as opposed to a more jerky and stereotypically robotic presence. Cameron wanted his star to imitate the mannerisms of a predatory shark, moving back and forth as he circles in on a prey.

Schwarzenegger then came up with the idea of moving his eyes first and then having his head follow, "almost like a surveillance camera."

Cameron and Schwarzenegger also spent a great deal of time discussing the film's most signature quote, "I'll be back," which was originally written as "I'll come back" until the actor suggested a line change.

Other memorable quotes, like "Come with me if you want to live" and "You're terminated, f****r" are still recited by fans 30 years later, exemplifying the film's impact on pop culture.

In 2008, "The Terminator" was selected for preservation by the U.S. Library of Congress.

"I always felt that this was more than an ordinary action film," Schwarzenegger said. "This was more than a special effects film, and what some thought was just a B movie, and that it is only appealing for the kids between 14 and 18. This is not to be looked at as just a limited audience, a movie for a limited audience, but in fact I think the story is so solid and so good and has so many interesting messages there."

Along with Hamilton and Cameron, Schwarzenegger returned to the franchise for 1991's highly-successful "Terminator 2: Judgement Day." He also starred in "Terminator 3: Rise of the Machines" but sat out on 2008's "Terminator Salvation" (although a likeness of the actor does appear in CGI form).

As his character famously says, Schwarzenegger will be back -- this time for the next sequel, "Terminator: Genisys," due out July 1, 2015.

Check out our photo gallery at the top of this story for even more insight into Cameron's classic.

Tell us: What's your favorite scene or line from "The Terminator"?