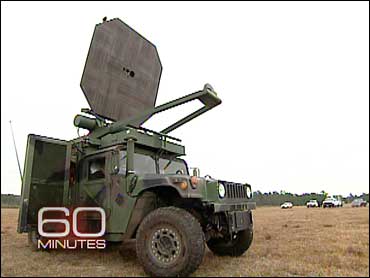 What if we told you the Pentagon has a ray gun? And what if we told you it can stop a person in his tracks without killing or even injuring him? Well, it's true. You can't see it, you can't hear it, but as CBS News correspondent David Martin experienced first hand, you can feel it.

Pentagon officials call it a major breakthrough which could change the rules of war and save huge numbers of lives in Iraq. But it's still not there. That because in the middle of a war, the military just can't bring itself to trust a weapon that doesn't kill.


It's a gun that doesn't look anything like a gun: it's that flat dish antenna which shoots out a 100,000-watt beam at the speed of light, hitting any thing in its path with an intense blast of heat.

An operator uses a joystick to zero in on a target. Visible only with an infrared camera, the gun, when fired emits a flash of white hot energy - an electromagnetic beam made up of very high frequency radio waves.

Col. Kirk Hymes, head of the Joint Non-Lethal Weapons Directorate, is in charge of the ray gun which is being tested at Moody Air Force Base in southern Georgia.

The targets at the base are people, military volunteers creating a scenario soldiers might encounter in Iraq, like angry protestors advancing on American troops, who have to choose between backing down or opening fire. Off in the distance, half a mile away, the operator of the ray gun has the crowd in his sights.

Unlike the soldiers on the ground, he has no qualms about firing away because his weapon won't injure anyone.

He squeezes off a blast and the first shot hits like an invisible punch. The protestors regroup and he fires again, and again. Finally they've had enough. The ray gun drives them away with no harm done.

Officially called the "Active Denial System," it does penetrate the body, but just barely.

What happens when the beam hits a person?

"It's absorbed in the top layer, 1/64th of an inch, which is about three sheets of paper that you'd find in your printer," Col. Hymes explains.

"And it's hitting what inside that 1/64th of an inch?" Martin asks.

"Well, right within that 1/64th of an inch is where the nerve endings are," Hymes says.

You have to feel the ray gun to believe it, and there's only one way to do that. Martin, who voluntarily became a target, described the sensation of being hit by the ray gun like scalding water.

What makes this a weapon like no other is it inflicts enough pain to make you instantly stop whatever it is you're doing. But the second you get out of the beam the pain vanishes. And as long as it's been used properly, there's no harm to your body.

"We have war fighters that are in harm's way and you know they don't want to kill innocent people. You pick between a bullet and a bullhorn, not a good choice," says Sue Payton, an assistant secretary of the Air Force and the Pentagon official in charge of buying the ray gun.

Payton's close encounter with the ray gun was two years ago. She was a big-shot from the Pentagon, so they dialed down the power of the beam.

But Payton wanted a full blast and she got it. She screamed and ran away when the beam hit her.

Asked what she thought of the system, Payton tells Martin, "I loved it. I started giggling."

"Giggle is not the usual response to pain," Martin remarks.

"Well, I giggled after I got zapped. You giggle because you realize you're okay, and you realize that it had the effect that we want it to have," she explains.

The impulse to run the other way is so strong that anyone who keeps coming has to be considered a threat.

"It could be used to read someone's mind, in effect, because you immediately know what someone's intention is. If they continue to come at you, then you're fairly sure they're not a tourist. They're probably a terrorist or an adversary who wants to do you harm," Payton explains.

So far, the ray gun has been tested only against make-believe adversaries, protestors whose rage is about as real as the placards they're carrying. You have to wonder if a more determined enemy could beat the beam.

"I've got several layers on, but the beam is still coming through my clothes so I'm going to try some shields here. This is a piece of plywood. See how far this gets me. Ouch," Martin said, gearing up for another hit by the gun.

"It leaves too much of your body exposed. They got me down in my feet. So I'm going to try this mattress here. It will cover up more of my body," he said after getting zapped.

"It hurts, but I can keep going. Oh, that's enough. So that did protect me, but that's a half mile to get where I'm trying to go and you kind of give yourself away if you walk around with a mattress," he remarked.

No one gave any thought to using the ray gun when the U.S. first invaded Iraq, but as the invasion turned to occupation, American troops started going eyeball to eyeball with Iraqis and couldn't tell who the enemy was and who was just angry.

Twenty civilians were killed in April 2003 when soldiers from the 82nd Airborne fired on threatening crowds in Fallujah. That prompted an e-mail to the chairman of the Joint Chiefs of Staff from a senior military scientist who knew what the ray gun could do. "I am convinced that the tragedy at Fallujah would not have occurred if an Active Denial System had been there," the e-mail read.

Days later, a three-star general wrote, "Having ADS…" (Active Denial System) "…in the field today would impact operations in a very critical way."

Sue Payton believes this gun would save "huge" numbers of lives in Iraq.

"Do you ever look at what's happening in Iraq and say, 'We've gotta get this thing there faster,'?" Martin asks.

But sending the ray gun to Iraq was, in the words of one Pentagon report, "not politically tenable."

Asked what "not politically tenable" means, Payton says, "Unfortunately we have had something called Abu Ghraib."

After pictures of abused Abu Ghraib prisoners surfaced there was no stomach for even the momentary pain of the ray gun. "You don't ever, ever, ever want a system like this to be thought of as a torture weapon," Payton says.

But Sid Heal, a former Marine who has followed the ray gun's progress for nearly a decade, says the potential for abuse is not what's holding it up. It's something else: cowardice.

"There's no other way of saying it. You could try to save people's life with a non lethal weapon and fail and it'll still be noble. But failing to try is cowardly. . . That is completely unacceptable," Heal explains.

Heal was once the Marine Corps' point man for non lethal weapons. He took them to Somalia in 1995 after America's ill-fated attempt to relieve the famine there had degenerated into a shooting war.

"It's very difficult to make a case for a humanitarian operation if the only way you have of imposing your will is by killing the people you're sent to protect," Heal says.

Heal has tried to teach Marines to use everything from sticky foam to lasers.

The non-lethal weapons Heal works with at the Los Angeles County Sheriff's Department today are no more advanced than what he had in Somalia 13 years ago.

Asked what his best stopper is, Heal says, "Sponge grenade. It's accurate out to ranges that exceed any of our other stuff."

"You could easily get to 50 yards with this one," Heal explains. "And matter of fact, that's the longest range right now, anywhere in the world… The stuff that we're using in the field right now is very close range. That's one of our biggest complaints."

One of the ray gun's biggest advantages is that it can stay out of harm's way and still control a crowd.

Sid Heal wants to use it to control prison riots; the Navy could use it to fend off Iranians with their go-fast boats harassing American warships in the Strait of Hormuz. And the State Department could use it to protect American embassies like the one attacked by protestors in Belgrade.

Yet the Pentagon is spending just $13.1 million on the ray gun this year, out of a $475 billon defense budget.

Why is the Pentagon spending so little on technology that could change the rules?

"We don't have enough money to do the things that are the here and now, so it's extremely competitive. So, yes, $13 million is chump change. I regret that," Sue Payton explains.

"Could you have fielded it sooner if you had more money to spend on it?" Martin asks.

A report by the Pentagon's Defense Science Board says the military is reluctant to spend much money on active denial until it has proven itself in the field.

"Sounds like a Catch-22. You can't get real money until it's fielded. But you can't field it until you get real money," Martin comments.

"That's exactly the way it is," Payton agrees.

Col. Hymes, who is in charge of all non-lethal weapons for the Pentagon, says the ray gun will be ready to go to Iraq this summer. But it's swimming against the tide of conventional military wisdom. "The active denial system, being new technology, is gonna have a lot of stigma around it," Hymes says.

"I've never heard anybody use the word stigma with respect to a new weapon," Martin says. "If this system could kill people it would be easier to field?"

"Lethal systems have an easier time getting into our system," Hymes says.

"You're going up against the culture of your own military?" Martin asks.

The ray gun has been tested on humans more than 11,000 times over ten years. The early tests, recorded with an infrared camera, were against people in their underwear so scientists could measure skin temperature. Their backs were turned so their eyes would not be exposed. Out of 11,000 tests there have been six cases of rashes and blisters, and two of more serious second degree burns. It's now cleared for full power on any part of the body.

Some people claim they've been able to stand the beam for four or five seconds. So how long could Martin take the heat? Turns out about three seconds, before he ran off.