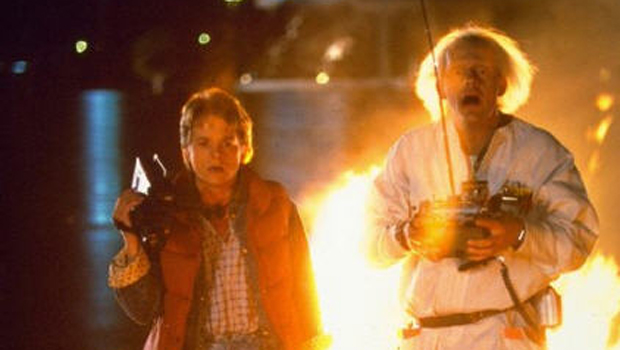 Director Robert Zemeckis is literally going back into the past for his next project -- a stage musical version of "Back to the Future."

Producers said Thursday night that a show adapted from the sci-fi comedy franchise starring Michael J. Fox as Marty McFly will open in London's West End in 2015, the 30th anniversary of the film. A Broadway run is a possibility if the new musical flies as well as the film's specially equipped DeLorean.

The new musical will have a book by Zemeckis, Bob Gale and Jamie Lloyd, and new music and lyrics by composer Alan Silvestri and songwriter and record producer Glen Ballard. Lloyd also will direct.

"The production will include illusions, skateboarding and many other surprises that will capture the spirit of the film but freshly interpret it for a new audience," Lloyd said in a statement Friday.

In the 1985 film, McFly becomes a human guinea pig who travels back to his hometown in 1955. Once there, he gets caught up in the soap opera lives of his own teenage parents, including his mom who develops a crush on her future son.

The film was written by Zemeckis and Gale and had plenty of music, including the Huey Lewis and the News theme tune "The Power of Love" and McFly's futuristic rendition of "Johnny B. Goode."

Oscar-winner Zemeckis has directed all "Back to the Future" films, as well as "Who Framed Roger Rabbit," ''Forrest Gump," "The Polar Express" and "Flight."

Silvestri has scored many of Zemeckis' films, including "Romancing the Stone," "Forrest Gump" and "Cast Away." Ballard, a six-time Grammy Award winner, co-wrote and produced "Jagged Little Pill" for Alanis Morissette and co-wrote the music for the stage musical adaptation of "Ghost."

Jamie Lloyd's credits include directing "Cyrano de Bergerac" on Broadway, "The Duchess of Malfi" at the Old Vic and "She Stoops to Conquer" at the National Theatre. Gale, a frequent Zemeckis collaborator, has also written comic books, including issues of "Batman."

Set and costume designs will be by Soutra Gilmour, illusions by Paul Kieve, lighting design by Jon Clark, and musical supervision by Alan Williams.  Andrew Willis will be skateboard consultant.

The producers of the "Back to the Future" musical will include Steven Spielberg's Amblin Entertainment, Colin Ingram, Universal Stage Productions, Donovan Mannato and CJ E&M.