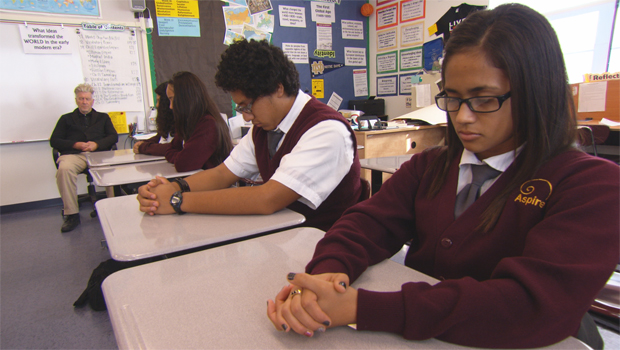 This about it: Whether it's improving our day-to-day lives or surviving a sudden calamity, there's no substitute for clear-headed mental discipline. And a growing number of people believe they know how to find it. Our Cover Story is reported by Mo Rocca:

Allan Lokos and his wife, Susannah, were on vacation when their plane crash-landed in the Southeast Asian nation of Myanmar on Christmas Day 2012.

"And the cabin was filled with smoke?" Rocca asked.

Allan managed to get his wife out of the plane, but when it was his turn to escape ...

"I caught my foot on something, and I was stuck there. So in a nutshell, I was now standing in fire."

But even though he was engulfed in flames, Lokos didn't panic.

Rocca asked: "Do you think that came from meditation?"

"Oh, absolutely. You're in fire, so it's a frightening situation. But there was also a sense of calm with that."

Lokos, a practicing Buddhist and an experienced meditator, made it out. But with burns covering 33 percent of his body, survival was a longshot. "Every doctor who saw me, they all said the same thing: 'You can't survive these injuries,'" Lokos said.

But Lokos did recover. And he says his ability to remain calm, cultivated from meditating seven times a day for 20 years, is a big part of why he survived a fiery plane crash.

He says had he not been calm, "I would be pretty certain that I would have died in the plane. The person right behind me did," Lokos said.

It may seem like a stretch that years of meditation -- the act of focused, quiet thought -- made the difference between life and death in a devastating plane crash. But it's a proposition that's being taken more seriously than ever before.

"I have no doubt that that kind of mental training would enable you to essentially put aside the fact that your body is basically yelling, 'Emergency! Emergency! Emergency!' -- enabling you to do something, to essentially attain a certain calmness in the face of that that would allow you to take action," said Dr. John Denniger, director of research at the Benson-Henry Institute for Mind Body Medicine in Boston, Massachusetts.

People who are meditating may look like they're in a passive state, but their brains are very much active.

Denniger says that meditation has benefits way beyond staying calm.

Can help you quit smoking? "True."

Studies have shown that it may have an impact on the cellular level, too, slowing the effects of aging and increasing neuroplasticity, which is the ability of the brain to grow new brain cells and develop new connections.

"They thought that once you were an adult, neuroplasticity was gone," said Dr. Denniger. "That has clearly been shown not to be the case. One of the clear findings is that meditation has the ability to actually make certain brain regions thicker, and that means that there is a growth of brain cells."

It's a long way from when meditation was seen as strictly "alternative" medicine.

Rocca asked, "In this country, we're safely out of the 'woo-woo' zone, in terms of its perception?"

About 18 million Americans meditate, including some very bold faced names like Jerry Seinfeld and Clint Eastwood. One of them is director David Lynch.

"I started meditation on July 1, 1973, on a sunny Saturday morning at 11 o'clock," he said. "I remember it as if it was yesterday. And it was so beautiful. I've been meditating twice a day for over 41 years and never missed a meditation."

It might come as a surprise to learn that Lynch, the director of such dark movies as "Blue Velvet" and "Mulholland Drive," calls himself a "bliss ninny." He practices transcendental meditation, also known as TM.

"People see things like stress, traumatic stress, tension, anxiety, sorrow, depression, hate, anger and fear start to lift away," Lynch said. "So it's like pure gold coming in from within and garbage going on."

For Lynch and its adherents, TM and its repetition of a personalized mantra can help free the mind from what he calls "the rubber clown suit of negativity."

"It's suffocating, it stinks, it's heavy, and you start meditating with transcendental meditation from a legitimate teacher and that clown suit will start dissolving," he said. "And you'll feel so good."

And that's more than just talk. In 2005 he began the David Lynch Foundation for Consciousness-Based Education and World Peace. One of its goals: to teach students, like those at a school in Los Angeles, how to meditate.

"Like, sometimes in the morning, I don't want to come to school," said one male student.

But meditating, the student said, "makes me want to come to school."

Rocca asked several students: "Did anybody here, when you first heard about meditation, think, 'Okay, that sounds kinda weird'?"

Betsy, Maria and Ana all said yes. "I thought it was, like, you know when you crossed your legs and you hold your hands -- I thought we would have to do that," Ana said.

Twice a day for 15 minutes, these students meditate.

"After that, it just helps me, like, keep my day going," said Maria. "[Makes] everything that's bad, like, go away. And I just think of the positive things. It makes me become, like, more -- I don't know, more happy within myself, and I guess, more patient with others."

"When I'm in a better mood, my family's in a better mood," said Ana. "I don't argue as much with my sister! But when I get home after I meditate, I'm just in a good mood. I feel better about the day, you know? Nothing bugs me."

Principal Jennifer Garcia says her school -- like 43 other schools that have adopted the program -- has changed for the better.

"Kids are calm, and they're not taking stuff out on each other," said Garcia. "And they're really engaged in wanting to be helpful with each other. It's a different place."

Allan Lokos never expected to get back to his class -- he resumed teaching his weekly New York City meditation group only four months after the plane crash that almost killed him, and almost a full year before doctors expected him to be on his feet at all.

"If it happens to help save your life in a plane crash, that's terrific," said Lokos. "Let's hope that that's not how it happens. But I think most of us, if not all of us who do this, see changes in our life every day that are significant. And for me, I mean, that's just great."