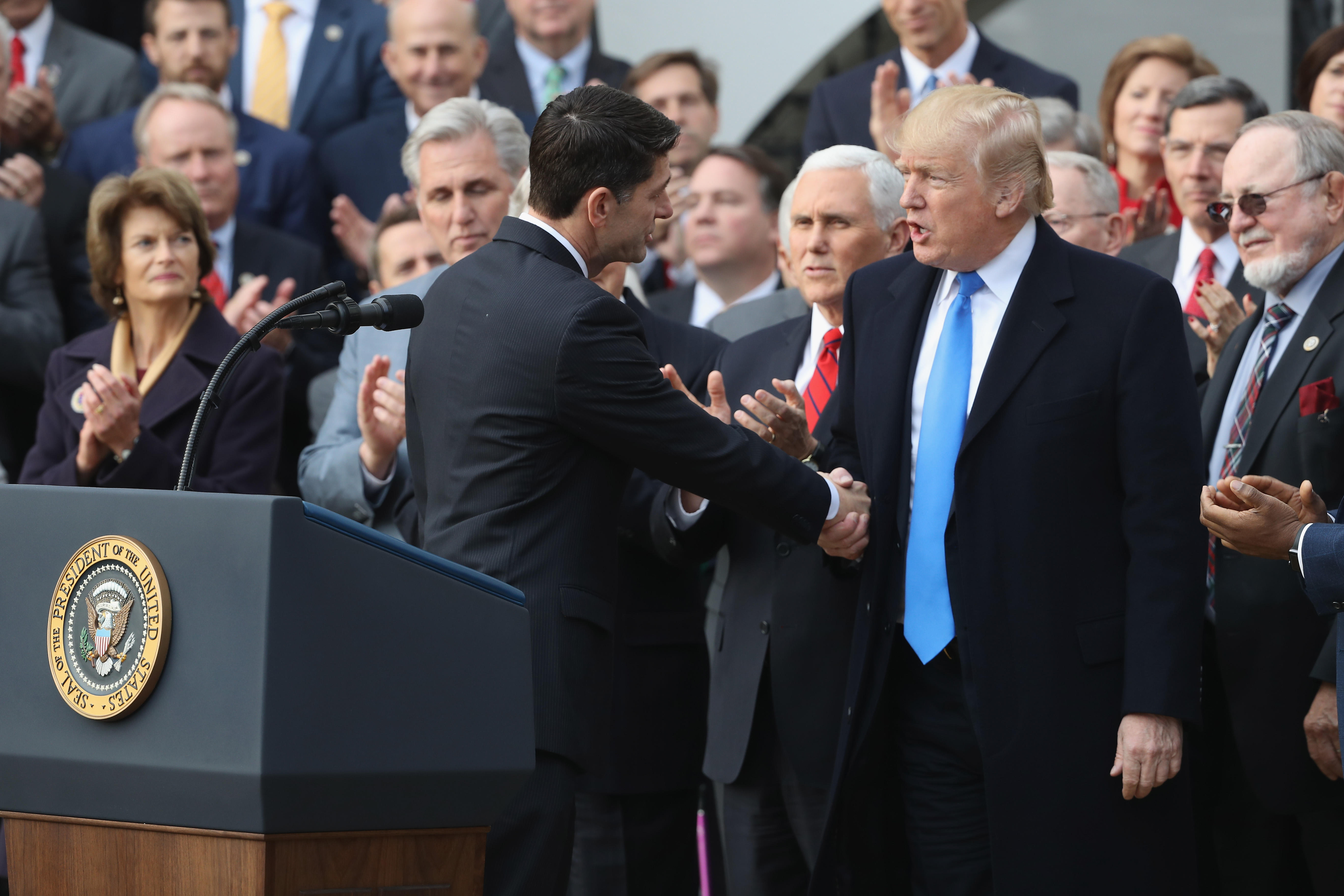 President Trump is finishing his first year in office with a bang, with Congress passing legislation to overhaul the nation's tax code. And despite his low popularity and his drama-filled White House, Mr. Trump has done what many of his predecessors haven't: he's fulfilled many campaign promises.

The House and Senate approved the GOP-sponsored tax plan last week, which includes a repeal of the Obamacare individual mandate. In early December, the Supreme Court allowed his proposed travel ban to take effect amid a series of legal challenges.

Soon after his inauguration, Mr. Trump nominated Neil Gorsuch to serve as a Supreme Court justice to fill the seat left vacant by Justice Antonin Scalia who died in February 2016. The Senate confirmed him in April in a 54-45 vote in a simple up-or-down majority vote. Senate Republicans had successfully invoked the so-called "nuclear option" to get him confirmed, effectively terminating the filibuster for Supreme Court nominees.

With the help of the Republican-controlled Congress, the president celebrated the GOP-sponsored tax plan last week and signed the bill into law on Friday. Specifically, it lowers the corporate tax rate from 35 percent to 21 percent and roughly doubles the standard deduction, from $6,350 to $12,000 for individuals, and from $12,700 to $24,000 for married couples filing jointly. It also keeps seven individual tax brackets, among other things.

The Supreme Court said in early December that the latest version of Mr. Trump's travel ban could take effect. In September, he had signed a new proclamation that places new restrictions on travel to the U.S. as his previous ban was set to expire. The latest ban in effect applies to Chad, Iran, Libya, Somalia, Syria and Yemen.

Mr. Trump has been keen on reversing much of what was implemented under the Obama administration. For example, the president signed memoranda that attempted to renew the process for the construction of the Keystone XL pipeline, which was halted by Mr. Obama, and the construction of the Dakota Access pipeline. Within his first few days in office, Mr. Trump signed a presidential memoranda that withdrew the U.S. from the giant trade deal, the Trans-Pacific Partnership, which was negotiated by President Obama. He had also announced his intentions to renegotiate NAFTA, as he had promised to do during the election. Mr. Trump also rolled back part of Obama's policies that normalized U.S. relations with Cuba and pulled out of the Paris climate accords. He also reversed a number of regulations with the help of congressional Republicans.

While President Trump directed the Department of Homeland Security to begin work on his proposed wall along the U.S.-Mexico border, construction has yet to begin. Prototypes for the border wall were completed in October and U.S. Customs and Border Protection (CBP) said at the time that it would soon begin testing them. The administration may be preparing for the wall, but Congress has not allocated funding for it. Funding has been repeatedly blocked by Democrats whose votes Republicans need for spending bills in the Senate. Spending legislation requires 60 votes to advance in the upper chamber and Republicans only have 52 members. It's unclear if Mr. Trump will ever have funding approved for the wall, especially with lawmakers approaching the 2018 midterm elections.

Congress was not able to deliver Mr. Trump a full repeal of the 2010 health care law, even under the budget reconciliation process that only requires a simple majority vote for certain legislation in the Senate. To deal with that setback, the administration has done everything in its power to dismantle Obamacare itself. The president, for instance, announced in October that he would end cost-sharing subsidies paid to insurers under the Affordable Care Act (ACA). In the tax measure, Congress also repealed the law's individual mandate.

Infrastructure appears to be next on Mr. Trump's agenda. As he signed the tax bill, he told reporters, "Infrastructure is by far the easiest. People want it – Republicans and Democrats. We're going to have tremendous Democrat support on infrastructure as you know. I could've started with infrastructure — I actually wanted to save the easy one for the one down the road. So we'll be having that done pretty quickly." And Democratic support is not optional -- he will need their support to pass an infrastructure bill, since the legislation will not be passed using the budgetary tool that allowed Republicans to pass their tax bill with a simple majority.

The president often talked about rebuilding the nation's "crumbling" roads, highways and bridges during the 2016 campaign, but the White House has not yet presented a concrete plan. In his initial response to the Amtrak train derailment in Washington state, President Trump pointed to his forthcoming infrastructure plan. The tweet did not take into account that the accident had, in fact, occurred on a newly constructed section of track when it derailed -- not on one that was in disrepair.