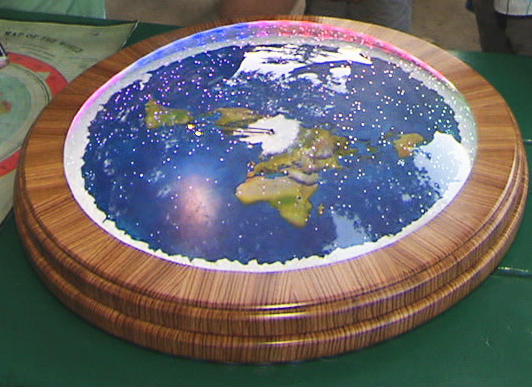 If you picture Earth as a ball spinning through space. the folks who recently gathered at a park in Arcadia, California, are eager to argue: you're wrong!  Earth is actually "flatter than a pancake," said Nathan Thompson, part of a movement of people who call themselves Flat Earthers.

They insist the Earth is, well, flat.

We're living, these folks say, on a disk floating through space, with a tiny sun hovering just overhead. But what about the Earth's curvature? "I don't know. No one's ever seen it," said one man.

"The perimeter of Flat Earth is a wall of ice," said Thompson.

"That's what's containing everything," he said.

And what's underneath? "Well, you know, we haven't dug that deep," said a Flat Earther named Rene.

Netta Hagler, who arranged the meet-up of the Flat Earthers, questioned the fact that Earth is spinning through space at 1,000 miles per hour. "But we can't feel it. I don't believe I'm spinning right now. No," said Hagler.

Patricia Steere, who is one of what you might call the "stars" of today's Flat Earth movement (which mostly orbits around YouTube), told Silva-Braga, "Probably most people who hear of it will laugh at it, think we're idiots. But we're not idiots; we're intelligent people from all walks of life and all ages."

Flat Earthers have brought levels onto planes (to prove they are flying level), and zoomed in on the moon and "found" clouds supposedly drifting behind it. "Moon is only a few miles up," said one Flat Earth YouTuber. "We've been lied to on such a massive scale!"

Steere agreed to play a game of "20 Questions: Cosmic Edition" with Silva-Braga.

Photos of the Earth from space? "Completely and utterly false," she said.

Is the sun 93 million miles away? "No, the sun is not as far away as we've been told, nor is the moon. They're probably about the same size."

Pictures of astronauts floating around on the space station? "Completely fake. Harnesses, wires."

Did we really go to the moon? "No. We didn't go to the moon," said Steere. "And we don't have a rover on Mars. And we didn't do a fly-by of Pluto. We've never been to space. Period. End of."

In short, Flat Earthers don't believe much of anything unless they see it for themselves. They believe NASA is just part of a broad conspiracy.

According to Steere, "It's a giant game of chess. We, all of us in humanity, are the pawns. Part of the whole Flat Earth thing is keeping us locked down, not knowledgeable about who we are, who we really are as people, and what we're capable of."

National security expert Tom Nichols, who teaches at the Harvard Extension School, takes a dim view of Flat Earth. He told Silva-Braga he thinks something new is happening: "People have really become obsessed with the idea that, if it's not part of their direct experience, it can't be true.

"People have lost faith in experts. We've developed a kind of reverse snobbery that says if you have a great deal of education, if you're at a well-known institution, by definition you must be a liar!"

Nichols poured his expertise into a book about "The Death of Expertise" (Oxford University Press).

He said, "Oftentimes younger people will say, 'Well, the internet is just a big library.' That's wrong; the internet is a big dumpster. There's no guarantee that anything you find on it is true."

"No. When it comes to knowledge, more democratic is not good, absolutely not. We don't decide how fast things accelerate in a vacuum by voting on it."

So, in this "Show-it-to-me" world, we traveled to the Southern California desert, to meet, for ourselves, the one man who is boldly going where no Flat Earther has gone before.

Meet Michael Hughes – "Mad Mike" to his fans. Limo driver, self-styled daredevil, and most recently, do-it-yourself Flat Earth explorer. "I am their best hope. I am the best hope to prove the Flat Earth," he said.

And that rocket sitting outside his house? Mad Mike built it himself.

Silva-Braga asked, "How does one go about finding out how to build a rocket?"

"You don't get a lot of second chances, though, in the rocket business."

This past March, Mad Mike actually climbed into his steam-powered rocket, and set off to see what he could see. And to the surprise of almost everyone, Hughes took flight, and landed more or less intact.

True, 1,800 feet is not nearly high enough to properly survey the planet. But Mad Mike now has a plan to go 62 miles up, to the edge of space, where he'll be able to see (or not see) the curve of Earth.

A model hanging in his house shows how he hopes to strap himself to a contraption involving balloons and rockets and blast off.  "The first 20 miles will be with a balloon," he said. "And after that, my rocket will fire, pull me from the balloon, and then actually once the rocket quits firing, I will actually fly like Superman for, like, another 30 seconds with no power, just up into the atmosphere."

And if he somehow pulls that off, Mad Mike says he'll disprove centuries of science once and for all.

And with that, we put the ball back in professor Nichols' court.

"The world looks flat. I look out my window, I don't see a curve," said Silva-Braga.

Nichols replied, "Right, the world looks flat. And who are you to tell me that my perception is no better than anyone else's? And I think that's a really dangerous thing, because, you know, the Earth is round, and you'll learn that the hard way if you try and fly an airplane!"