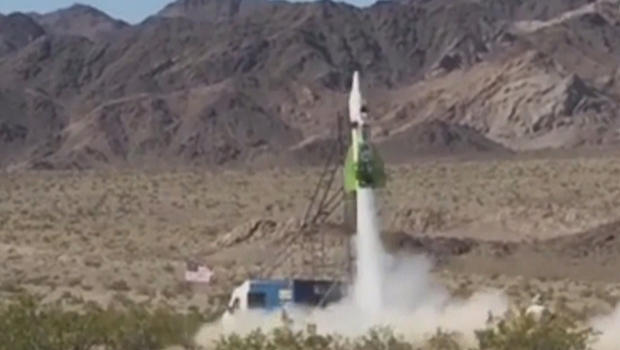 After several failed attempts, a daredevil rocket-maker soared into the sky Saturday in a steam-powered rocket he built in his garage. "Mad" Mike Hughes, 61, launched himself into the heavens, he said, to confirm his theory that the Earth is flat, and shaped like a Frisbee, reports correspondent Mireya Villarreal.

After reaching an estimated speed of 350 miles an hour, Hughes pulled his parachute. He then deployed a second chute just before hitting the ground in the Mojave Desert, near Amboy, Calif. He only hurt his back.

He admitted the mission could have been deadly.

Before the launch Hughes told Noize TV: "I think it's a good platform to raise awareness and money to get me to space."

Hughes, a former stunt limo driver, says he's received almost $8,000 in funding from Research Flat Earth, a little-known group which believes the Earth is flat, and that the sun and the moon rotate around the outer edge.

"Do I believe that the Earth is shaped like a Frisbee or flat or whatever? I believe it is. 'Cause I cannot disprove it," Hughes said.

While thousands of years of science has yet to convince "Mad" Mike the Earth is round, he isn't alone. A number of celebrities, including basketball stars Shaquille O'Neal and Kyrie Irving, have drawn attention for supporting the theory. They've both since said they were joking.

But for Hughes, it's no laughing matter.

"This is why I want to go up into space 62 miles up, to set this thing straight for people to know," he said.

Hughes plans to share his observations around -- or across -- the world.