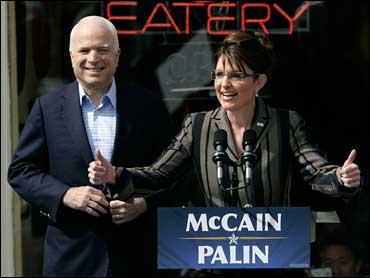 
Wisconsin doesn't get as much attention as other battlegrounds - but it probably should. It's been one of the nation's closest states in two consecutive presidential elections: while the nation's eyes were focused on Florida in 2000, Wisconsin was decided by a mere 5,000 votes, and in 2004 John Kerry's margin was only 11,000 votes out of about three million cast.

Democrats do well in statewide races (they now hold both Senate seats and the governorship) and this year had a high-turnout primary that brought out many new voters - indications that this state could end up right back in the blue column. But those razor-close presidential contests, and the fact that Democrats had to rely so heavily on high turnout to squeak out a win in 2004, sit as stark reminders that Wisconsin could be in play again; in fact, John McCain headed straight for it after the GOP convention.

Can Democrats keep their primary momentum?

This winter the Wisconsin primary generated a lot of interest and even shook up the Wisconsin electorate somewhat, bringing a lot of new voters onto the rolls - voters who may well decide the state when they decide whether or not to turn out again.

The Wisconsin Elections Division calculates that as of this summer over 125,000 new registrants had come on board since January, including 85,491 who - as permitted under the state's same-day registration - walked in and registered on Primary Day itself. Another 32,562 first-time registrants signed on to the rolls in 2007, the year leading up to the primary.

Consider that all those new voters in the last year-and-a-half amount to about twenty times the deciding margin of the 2004 presidential race.

The Democratic primary drew 1,113,753 voters (about 55,000 of whom were first-timers) an increase of more than a quarter-million over the Kerry-Edwards primary contest of 2004. Both Barack Obama, who won the primary, and Clinton - who lost it - got more votes in Wisconsin than were cast in the entire Republican primary (while that's not exactly a fair comparison because the GOP nomination was all but settled by the time the Wisconsin primary was held, there could be an edge for the Democrats because so many more voters have already cast a Democratic ballot this year).

The two counties that control Democrats' fate: Dane and Milwaukee

Wisconsin sets up as much a battle of turnout as of persuasion in key counties.

To win in 2004, the Democrats relied on enormous turnout increases in turnout in both Dane County (the city Madison) and Milwaukee, each of which overcame negligible population growth since 2000 to contribute a lion's share of votes to the Democrats.

Without those turnout boosts, Kerry would have lost Wisconsin. Approximately 25% of the 2004 state-wide vote was cast in Milwaukee and Dane, and Kerry's 208,000 plurality essentially won him the state. He lost the rest of the state by a 197,000-vote deficit.

This year, one might assume an enthusiastic turnout for Obama in both Dane and Milwaukee, as they boast high numbers of students and African-Americans who are likely to flock to the polls. That sets up a challenge for John McCain.

Can young voters deliver for Obama?

If there's one type of voter that could especially help turnout for Democrats, it is the young voter. They came out in 2004 -the state had a higher proportion of its electorate (20 percent) under 30 than nationwide (17 percent). These voters were essential to Kerry's win. They backed him 57 percent to 41 percent and Obama, who relied on them to win his nomination, will need them again in November, probably in even greater numbers.

Under-30 voters were 16 percent of the Democratic primary electorate, or about 178,000 voters, and went overwhelmingly (70 percent) for Obama over Clinton. Eighteen to 24-year-olds were even more for Obama -- nearly three-fourths backed him. John Kerry got around 340,000 votes from under-30's in 2004, so Obama is about halfway home if he can get the young people who voted in the Democratic primary to come out again and vote for him. Given his appeal to younger voters, this seems a reasonable goal.

How the Republicans win it back: suburbs and blue-collar communities

Despite the recent Democratic victories, the case could actually be made that Wisconsin has trended toward the Republicans from 2000 to 2004. In 2000 Ralph Nader got nearly 100,000 votes. If most of those votes had gone to Gore, then Gore's victory margin would have been much more comfortable, and larger than Kerry's 2004 margin.

To seize on that trend and win, McCain will need to improve a bit on President Bush's strong performance in mid-sized, blue collar and suburban communities.

There was nothing especially pro-Democratic about Wisconsin union workers in 2004 - Mr. Bush held his own among them with 37%, just shy of his 38% national mark. So McCain can certainly eye these voters.

Here are three close "battleground" counties (decided by around 5,000 votes each in 2004) to watch. If McCain is competitive he'll win, or be close in:

Then, McCain will need to run up large wins further afield, as Mr. Bush did in Brown County (a win that may have been assisted by John Kerry's mistake in pronouncing the name of Lambeau Field, the revered stadium of the hometown Green Bay Packers),
and Waukesha County, which is more suburban and west of Milwaukee. Eight percent of the total state vote is cast in Waukesha (it's the state's third largest county) and Mr. Bush amassed a plurality of 81,300 there. Add in an expected win in Outagamie, north of Oshkosh, and McCain could offset about half of Obama's take in Dane and Milwaukee.

But one suburban area that could be a challenge for McCain is Kenosha County. At the southern border with Illinois, it has some ties with the Chicago as some of its residents commute to the windy city - and that could give Obama a little added boost in a county that has already trended more strongly toward Democrats in the last two presidential elections.

There are at least three key questions facing Obama if he is to hold the state. Can he match Kerry's performance among:

Click here to read the latest news on the campaign in Wisconsin from CBS News and around the Web.