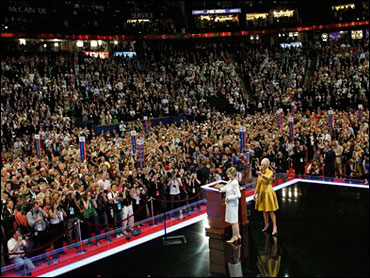 Anthony Salvanto is CBS News Manager of Surveys. Mark Gersh is Washington Director, National Committee for an Effective Congress, and a CBS News Consultant. This is part two of a CBS News' series: States To Watch In '08.

In much the same way the Democrats went to Denver with thoughts of recapturing Colorado, the Republicans are in St. Paul with hopes of finally snapping Minnesota's blue streak: for eight consecutive Presidential elections, Minnesota has voted Democratic.

Recent state elections make Minnesota look like it could be a swing state this year. In 2002, Minnesota followed a national Republican tide and voted Republicans Norm Coleman into the Senate and sent Tim Pawlenty to the Governor's Residence; then it went for Kerry in 2004, and in 2006 gave Democrat Amy Klobuchar a Senate seat. Democrats gained a Congressional seat in the rural 1st District that year, too - at the same time Pawlenty won re-election.

That Pawlenty victory not only got him short-listed for the Vice Presidential slot, but it also shows John McCain the electoral formula for contesting the state. Pawlenty ran extremely well in the suburbs in and around the Twin Cities media market - the swing area that will probably decide Minnesota in 2008.

The ring of suburbs and exurbs that surround the Twin Cities are growing and willing - but not guaranteed - to vote Republican. Consider three key counties: Dakota, Scott and Wright. They added a whopping 50,000 voters between 2000 and 2004; another 50,000 since. Today they hold more than 370,000 voters - or 12% of the state's electorate, a slight increase from their percentage share in 2004.

George W. Bush won them in 2004, improving in them from 2000- a Presidential trend that's good news for McCain. The successful Pawlenty won them comfortably en route to victory, building even higher percentages than Bush.

Yet just as those vote patterns might have cemented these as Republican counties, Democrat Amy Klobuchar won two of them (Dakota and Scott) in her Senate contest even as Pawlenty was claiming them for the GOP in his Governor's race. In the largest of them, Dakota, she more than reversed Pawlenty's percentage.

The bar is high for McCain, though: vote margins matter a lot in these counties, especially for Republicans. Bush won them, but didn't rack up enough votes in doing so to win the state. Pawlenty ran up very large victories and that, combined with his large margins in smaller, wealthy, solidly GOP counties nearby like Carver and Sherburne, helped him win. So it's Pawlenty's performance, not Bush's, that McCain hopes to emulate.

However, Obama will certainly look to challenge in these areas. Dakota, Wright and Scott are predominantly white collar, professional, and higher-income, not unlike a lot of the exurban areas that boomed nationwide in the 90's and early 00's.

In Minnesota, that's the topography of a battleground. Statewide in 2004, Kerry edged Bush among college-educated voters (doing better among them in Minnesota than he did nationwide) and won post-grads easily, while Bush won those with $100,000-plus incomes. Throughout the 2008 primaries, Democrats and Independents with higher incomes and education levels were a key component of Obama's coalition. He'll need them again in the General to hold off a McCain challenge here.

To the east and north of the Twin Cities, the suburban and slightly more blue-collar counties of Washington (about 150,000 voters, 5% of the state) and Anoka (185,000, 6% of the state) shape up as tightly-contested. Neither candidate figures to build a large enough vote margin there to wash away problems elsewhere, but McCain probably needs to either win these counties or keep them close.

Pawlenty did well (carrying about 54% of the vote) in these places, but not as well as in Scott and Wright where he topped 60%. George W. Bush very narrowly beat Gore in 2000 in those counties, but opened up comfortable wins in 2004. Democrat Klobuchar won them comfortably in 2006.

Republicans generally have relied heavily on support from white voters, and white men in particular, as a big part of their winning Presidential elections formula. In Minnesota, though, John McCain finds a white electorate (African Americans were just 3% in 2004) that is more likely to support Democratic presidential candidates in than many other states: John Kerry won 50% of whites here, 9 points higher than nationwide, and
49% of white men specifically, a full 12% better than he did nationwide. Meeting those benchmarks may be the key tests for Obama, and a challenge for McCain.

Kerry also exceeded his national figures with rural voters (with whom Republicans typically do very well) with 46%. Whether or not Obama can duplicate that might determine whether or not he holds the state.

Up in Minnesota's culturally conservative Iron Range environs - exemplified by Duluth in St. Louis County - the heavily blue-collar workforce gave Kerry strong support and strong turnout. Despite slow growth in the voting age population (4,506 between 2000 and 2004) almost 10,000 additional voters turned out in St. Louis County in 2004 as compared to 2000, as the county gave Kerry two-thirds of its votes and 8,000 more tallies toward his state totals than it gave to Gore in 2000. Still, the impact of the region is somewhat lessened by the fact that it is simply not booming like the suburbs.

Statewide, union households will be a critical part of the equation, though, and Obama may benefit from the cohesiveness of their vote, which favored Kerry by a wide 61%-38% margin. 30% of all voters in Minnesota came from households where at least one voter is a union member.

Finally, there is the wild-card of the youth vote - a group expected to be for Obama that could put a damper on McCain's chances to win here. Kerry won 57% of 18-29 year-olds and Obama will aim at least to hit 60% in 2008. Turnout is always a little more uncertain with this age group - but Minnesota's same-day registration rules make it easy for them to show up at the polls.

In 2004 John Kerry relied heavily not only on winning the twin cities of Minneapolis and St. Paul by solid margins - as Democratic candidates have traditionally done -- but he also benefitted from heavy turnout in those places, helping him neutralize Bush's edge in the suburbs.

If McCain is to win the state he'll need to do better than Bush in the Twin Cities, staying closer to Obama so that any margins McCain takes from the suburbs won't be offset.

Kerry won a surprisingly hefty majority in Hennepin County, which contains Minneapolis, taking 60% of the major party vote and ringing up a 129,000 margin over Bush. That was a big improvement over the 82,000-vote edge Gore had four years earlier. For McCain, success at staying close might mean approaching Pawlenty's 45 percent here rather than Bush's 40%.

Kerry's Hennepin success was augmented by an astonishing 70,000-vote increase in total turnout - this, in an area where voting age population had increased by only 18,375 between 2000 and 2004. Kerry's margin in Hennepin, and also in Ramsey County (the city of St. Paul), where he won by 75,000 votes as compared to Gore's 51,000, enabled the Democrats to hold the state.

All of which leads back to those three essential counties outside the Twin Cities. On September 4th all eyes will be on the action downtown in St. Paul's Xcel Center. But on November 4th a lot of the action in Minnesota moves - fittingly, perhaps - out to the suburbs.
By Anthony Salvanto and Mark Gersh