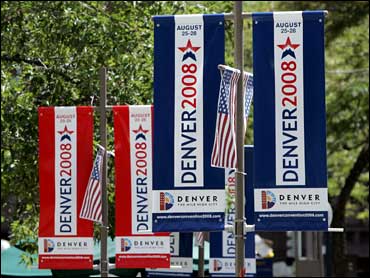 Anthony Salvanto is CBS News Manager of Surveys. Mark Gersh is Washington Director, National Committee for an Effective Congress, and a CBS News Consultant. This is part one of a CBS News' series: States To Watch In '08.


Colorado's name comes from the Spanish for "red," and on the Presidential Electoral Map it has certainly lived up to it, siding with the Republican in each of the last three contests and in all but one since 1964.

This year, though, perhaps no state better embodies Barack Obama and the Democrats' hopes of recasting that map, with its fast-growing, Democratic-trending suburbs and Hispanic voters. Recent elections have raised their expectations: Democrats recently captured a Senate seat and governorship here, and even though he lost, John Kerry improved on Al Gore's vote from four years prior. (In fact, Kerry improved over Gore more in Colorado than anywhere save Vermont, Alaska and Maine.)

For 2008, there are three key items to watch if reliably-Republican Colorado is really going to become a contest -- the growing Denver suburbs; new Democratic voters coming onto the rolls, and the Hispanic vote.

The suburbs: Winning isn't everything; margins are everything.

The Denver suburbs, sprawling not far from fabled Pike's Peak, hold the mother lode of Colorado's votes. These are growing counties: almost half of the state's voting age population and projected vote is now located in just five mostly-suburban counties of the Denver media market: Denver, Adams, Arapahoe, Jefferson and Boulder.

Their growth has diminished the power of the smaller, rural counties and towns in which Republicans have traditionally performed well, and they have been trending Democratic, offering Obama a chance to build vote margins in them that are large enough to carry the state.

Those margins are the key: it's not whether a Democrat wins this area that determines fortunes - it's whether they can win by a lot.

Here are the numbers. Even as Kerry lost Colorado in 2004, Democrat Ken Salazar won a Senate victory on that day. Salazar won these five Denver-area counties by 213,000 combined votes. Kerry won these counties combined, too - but by far fewer votes, around a 130,000 vote margin. That wasn't enough to cover Mr. Bush's edge elsewhere in the state, and Kerry lost while Salazar went to the Senate.

So these counties where Salazar did far better than Kerry emerge as especially key "swing" counties now: they are clearly willing to vote for a Democrat, but they are still competitive for a Republican presidential candidate.

Consider Adams (with 200,000 voters) where Kerry barely edged Mr. Bush while Salazar won by 20,000 votes. It has plenty of the kind of middle-class voters that Obama would like, and needs, to bring into the fold. Or Arapahoe, with 300,000 votes at stake: it went for Democrat Salazar by 53 percent while at the same time voting 52 percent in favor of Mr. Bush. Hispanics now comprise 13 percent of the voting age population there and will play a large role in deciding the winner. Jefferson County (350,000 votes) south and west of the city, also split for Salazar and Mr. Bush, and has the kind of upper-income, higher-educated voters that backed Obama in the primaries this spring -- he'll need strong support from them in the fall.

As if to prove the point, Democratic Governor Bill Ritter won statewide in 2006 by a 57 percent-40 percent margin; he was helped along by winning these five Denver-area counties by 236,000 votes - much like Salazar.

So a Democrat can perform well in this region and win the state - but as Kerry showed, they don't always. That's Obama's challenge if he is to compete for Colorado.

Further fueling the Democrats' ambitions here is that the area is trending Democratic. Even as Kerry's performance in the Denver suburbs proved insufficient, he still did better than Al Gore, almost tripling Gore's margin in these counties combined. That helps explain why Colorado was one of the few states that voted more Democratic in '04 than '00.

Registration: A trend toward Democrats

Another indication of the emerging Colorado battleground is Colorado's partisan registration: Republicans have an edge, but it is narrowing.

In November 2004 Republicans held a registration advantage over Democrats, and by more than 175,000 votes - a big reason the state stayed in the GOP column. Since then Democrats have cut that gap in half, to 87,000 voters. It is even smaller, 68,000, among active voters. To put that in context, what Democrats have made up in registration amounts to most of the Bush margin over Kerry in 2004.

A lot of this is due to new voters: as the primaries showed, newly-registered voters have been a key part of Obama's support when he's been successful. In Colorado, he'll probably need them, and their profile is heavily Democratic.

The Secretary of State's office reports that in 2008 alone, there have been 27,000 more newly registered Democrats than new Republicans: 69,000 people have signed onto the rolls as declared Democrats and 42,000 as Republicans. That difference alone would make up one-quarter of the deficit Kerry had against Mr. Bush.

Here are other county figures for those newly registered in 2008:

Younger voters are also key. Barack Obama's success in the primaries was helped in large part by young voters, and his fortunes in Colorado might hinge on their support again. In the state's ten largest counties, there are a half-million registered voters age 18-30, and 30,000 more than there were just one year ago.

In 2004, voters age 18-29 were the only CBS News Exit Poll age group John Kerry won in Colorado, with 51 percent. Obama must win well above that figure, as well as increase young voter turnout. The figures suggest the voters are there now in numbers large enough to make that possible.

The Hispanic Vote: Turnout is Key

Translating that shift into turnout, of course, is key. The Hispanic vote has been heavily Democratic: Salazar won his Senate seat with 72 percent of the Hispanic vote. Kerry fared almost as well, winning 68 percent. In 2004, 8 percent of voters were Hispanic. An increase to 10 percent this year would give a considerable boost to Obama's chances, even if he only matches Kerry's percent.

John McCain will also court the Hispanic vote here. For him, the question is whether he can improve upon the 30 percent of the vote that Mr. Bush received, and keep Obama's vote margins down in heavily Hispanic counties. Mr. Bush set what appears to be a good benchmark in 2004, which was a 5 percent improvement over his own performance in 2000, and he outperformed other top Republican candidates.

Colorado bears all the marks of a state deserving of attention this year, with narrowing registration gaps, growth in key consistencies, and dominantly-large suburban battlegrounds where Democrats and Republicans compete. It stands as a key test for Obama's hope of drawing enough new, suburban and Hispanic voters to pull a western state out of the red column.
By Anthony Salvanto and Mark Gersh