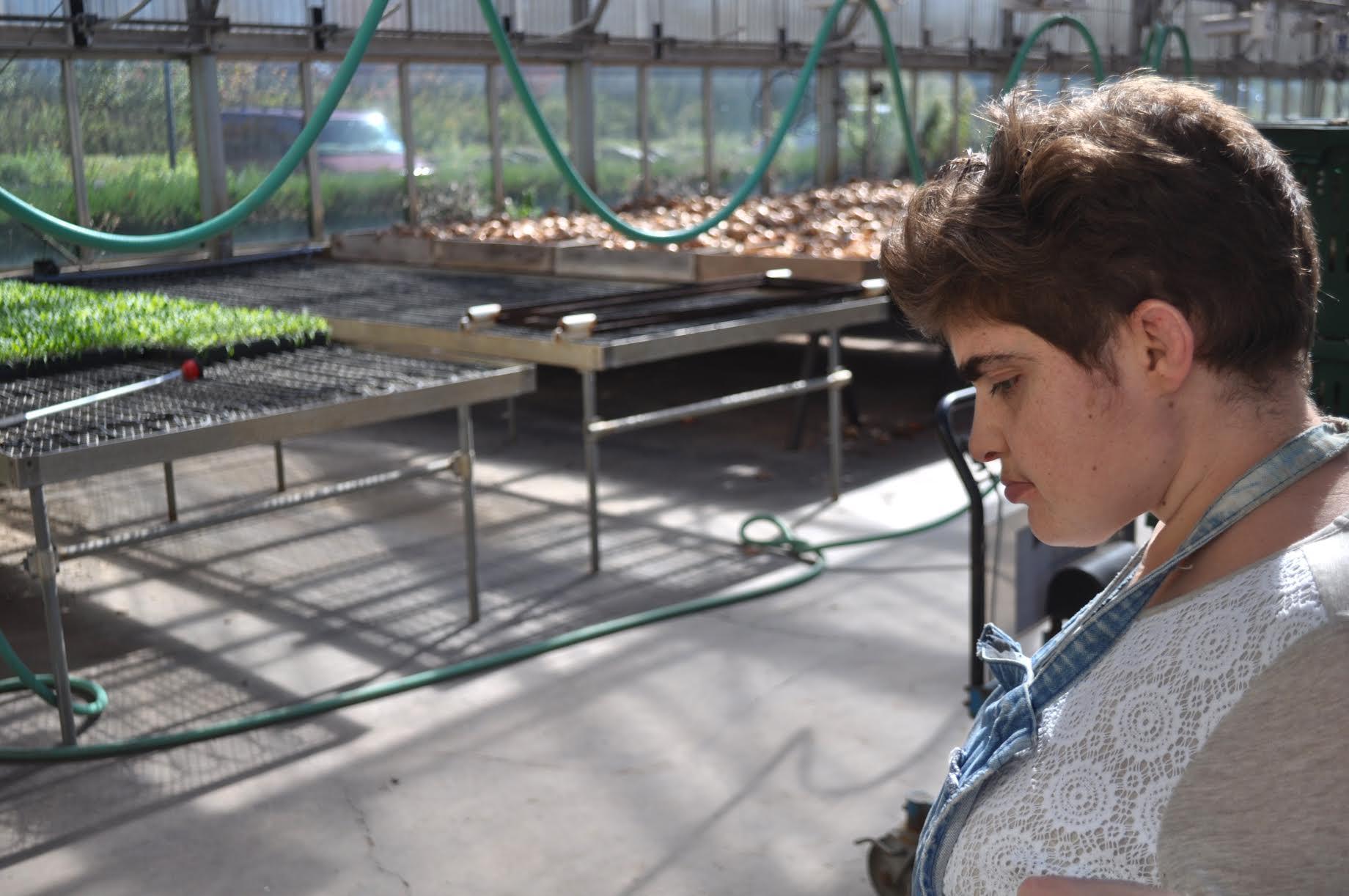 My favorite food on the campaign trail is the spicy chicken sandwich from Wendy’s. I ate one last week in Toledo after a Joe Biden campaign rally. Over the past year, I’ve eaten at Wendy’s all across America: In airports and small towns, at all hours of the day, between sprints to campaign events for the presidential candidates I’ve been tasked to cover over the past 500 days.

But my favorite Wendy’s sits at the crest of a two-lane road in upstate New York, across from a Greek restaurant and a firehouse. It’s a highway exit away from a school and residential facility my older sister Ellen has called home since she was 14-years-old. She was born with cerebral palsy.

Over the years, the fast food stop became a family staple, enjoyed together during our weekend visits. My sister can eat her favorite order, a broccoli-and-cheddar baked potato and a cheeseburger, with a fork and knife, but her motor skills are seriously impaired.

Ellen suffered from severe brain damage in my mother’s womb, shortly before she was born in 1985.

Thanks to the support she receives at school and in her home, Ellen lives a purposeful and happy life. She works the local farm, has friends, and even attended prom when she turned 18. Forget the word “disability” -- thrown around with nonchalance by both presidential candidates this election year -- Ellen makes everyone she touches better, more patient and more present.

She forces people to consider those who might not be able to speak for themselves. Ellen is the reason I am a journalist.

My sister works harder in her most mundane hours than most of us do inside our campaign bubble, spending our days grousing about travel, tweeting minutiae and pontificating about the 2016 race from the catered comforts of a network greenroom.

So much of this election has unfolded with my head buried in my iPhone, reading about an election that often feels disconnected from the lives of ordinary people. In that Wendy’s in upstate New York, where families take their disabled relatives out for a special lunch, cable coverage of the campaign does not blare over people’s meals. It is irrelevant. Before anything else, there is a pervasive concern for the future of those who can’t plan their own, or even plan their next day.

There is a single dominant image of the disabled in this campaign: Donald Trump’s November 2015 mockery of Serge Kovaleski, a New York Times reporter who refuted Trump’s November 2015 claim that he had seen “thousands and thousands” of Arabs in New Jersey cheering as the World Trade Center buildings collapsed.

“I don’t know what I said -- uhhhh -- I don’t remember,” Trump said, with his arms flailing from the elbow at an odd angle in what was seen as an imitation of Kovaleski’s disability. He was born with arthrogryposis, a condition that affects his joints.

That clip of Trump has been replayed an untold number of times, on news shows and in an avalanche of advertisements funded by Hillary Clinton and her allies, all designed to maximize the shock of seeing what Trump’s flailing arms and mockery look must look like to children and to the disabled who watch him on screen.

But as is the case with much of Trump’s disparaging rhetoric this cycle, some voters and experts say it’s taken the conversation about disabled people in the wrong direction.

“It has definitely undone a lot of people’s work to mainstream people with special needs, and not view them differently,” said Sandra Clark, a Cleveland voter who stood in the crowd at Bill Clinton rally last weekend. “We have a lot of special needs in our family and it’s very discouraging.”

Clark attended Clinton’s rally in Cleveland with her two special-needs children in tow. She had recently picked up her life in Kansas and moved to Cleveland to take care of her nephews, because her ailing sister has Alzheimer’s. Clark came to the event on Saturday, she told me, because she was seeking information she hadn’t heard from the media.

“It’s all about he-said she-said, and it’s nothing about the issues,” Clark said.

When we talk about people with disabilities in this election, we are simply talking about name-calling. To people like Clark, no one in the campaign is articulating how we can improve the lives of the 57 million Americans with special needs, many who will be voting themselves.

“What Trump has done is give license to say that people with disabilities are not worth as much as the rest of us,” said Sue Constantino, the CEO of the Cerebral Palsy Association of New York State. “We have made such great strides in our world over the last 20 years in terms of the acceptance of people with disabilities. Something like this, even if he doesn’t mean it, can really set us back.”

Those who work in the disability field would prefer to be discussing more granular policy matters. For instance, how the federal government can work more closely with states to provide better, more individualized care and invest in more research going forward.

But that’s not happening.

Trump has not mentioned a plan for research or improved care for the disabled, and there is nothing on his website on this issue. Hillary Clinton, meanwhile, has a history of relationships with people with disabilities; she has incorporated people with disabilities into her campaign and given them featured speaking spots during her nominating convention. Clinton also has a detailed plan to help families struggling with autism. Her campaign also points out that there are ASL (American Sign Language) signers at every event, and it has even made its campaign buttons in Braille.

Overall, though, there has been little actual discussion on the campaign trail, or in the press, about what either of the candidates would actually do to help disabled Americans.

Last year, the country celebrated the 25th anniversary of the Americans with Disabilities Act, a landmark civil rights law to fight discrimination against people with special needs. But there remains a shortage of funding and research that prevents schools and facilities from caring for disabled Americans in the most appropriate, case-by-case way.

Where my sister lives in New York is a bright spot. Set on sprawling bucolic farmland, the adult and pediatric rehabilitation facility offers a variety of state-of-the-art programs and residential services along with robust research initiatives.

But she and my family are lucky. Access to such highly specific treatment and support is rare.

New York has been able to establish more sophisticated programs for people with special needs, but expert say systems in most states are dramatically underfunded.

Block granting Medicaid funding into the hands of state governments, as Trump intends to do, would be “very troublesome,” according to Constantino. Budget cuts by state leaders trying to trim costs could have serious consequences for the majority of disabled people who depend on Medicare and Medicaid.

“We are really quite frightened about that,” Constantino added.

Overall, the process of navigating the byzantine rules and regulations set by the government to obtain personalized support or treatment can be prohibitive.

But the conversation is about more than just policy prescriptions. The Supreme Court, with one glaring vacant seat, will decide on several disabilities-focused court cases in the coming years. Clinton or Trump will appoint the justices who will rule on them.

When it comes to the law, Trump has run afoul of the Americans with Disabilities Act repeatedly over the years, having been sued for violating requirements that public places offer accessibility to those with special needs. He attempted to fight several of the violations and eventually settled; in only two of the cases did he actually make adjustments to the building.

Meanwhile, it was recently reported that Trump routinely called a former deaf contestant on The Apprentice, Marlee Matlin, “retarded,” while filming the reality TV show.

“The term is abhorrent and should never be used,” the actress wrote in a response to Trump on Twitter. “The fact that we are talking about this during a very important moment in American history has upset me deeply.”

That Trump allegedly has the capacity to talk in such a way -- and that he has never mentioned his personal connection to cerebral palsy in the form of his great nephew, William Trump, who was born with the condition -- might speak to the lingering stigma of shame and weakness associated with disabilities. Looked at another way, though, what Trump has said could wind up helping people.

“The conversation about how people with disabilities are disparaged, and that it should not be tolerated, has been a very positive event,” Michael Kirkman, the Executive Director at Ohio Disability Rights Law and Policy Center, told me. “It’s empowered my friends with disabilities, who now feel really motivated to go be part of the electoral process.”

And when they do vote in November, I’m hoping they stop at a place like Wendy’s on the way home, and think of people like Ellen.