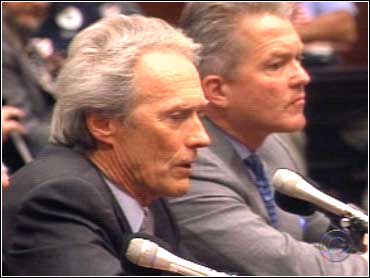 In a hearing room crowded with the disabled, Eastwood spoke out against a section of the Americans with Disabilities Act

He wants Congress to discourage what he calls frivolous lawsuits by attorneys reaping six-figure legal fees from small businesses.

He said, "It's just not fair and I'm just a common person speaking for fairness."

Eastwood owns a Carmel, California hotel and was sued by a disabled woman who said one of its bathrooms didn't comply with the Americans with Disabilities Act.

Paul Rein, the attorney for the person suing Eastwood, is asking for $577,000 in legal fees, Eastwood says.

The actor has lashed out at provisions in the federal law that prohibit the disabled from collecting damages but allow attorneys to collect fees.

"I totally support the ADA laws. I think people not in compliance should get into compliance," Eastwood said in a telephone interview Wednesday. But he added, "I think there should be a better way to get people in compliance."

Congress passed the act ten years ago after a moving lobbying campaign by disabled people, and it has been universally praised for giving the disabled access to public places.

But business owners say unscrupulous lawyers cruise shopping malls looking for violations, then sue before owners can correct them.

Donna Batelaan is a wheelchair-bound business owner who was sued before she could repaint an improperly marked parking space.

She testified, "It cost us less than a hundred dollars to correct the infractions, $2,000 in attorney fees."

Like Eastwood, she wants Congress to give owners 90 days to correct violations before they can be sued.

Eastwood says he speaks for many business owners who believe a loophole in the law is making victims of them.

The other side is not so sure.

Kyle Glozier, who is confined to a wheelchair, testified, "Mr. Eastwood had the opportunity to comply and chose to fight the case and lost."

Christine Griffen, the executive director of the Disability Law Center testified, "Owners of public accommodations have had ten years of notice and it makes no sense to give them an additional 90 days."

Rein, the attorney in the Eastwood case, said it would be unfair to require the disabled to notify people they believe discriminated against them.

A bill sponsored by Florida Repubican Reps. Mark Foley and Clay Shaw would require plaintiffs to give defendants notice of alleged violations and then 90 days to comply.

The Clinton administration opposes the measure, saying in a Justice Department letter to the subcommittee, "We believe that this proposed legislation would work to undermine voluntary compliance ... and it would unduly burden legitimate ADA enforcement activity."

Several disabled groups, including the Paralyzed Veterans of America and the National Council on Independent Living, are also opposed.