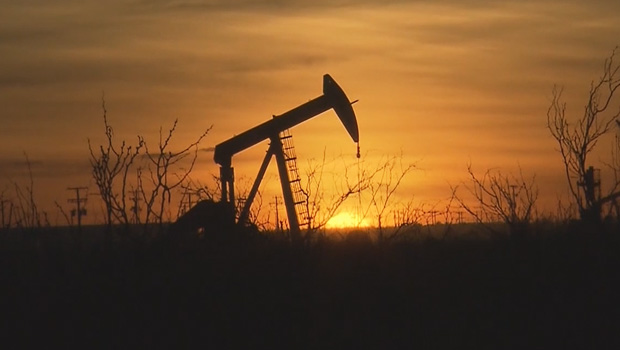 For people in the petroleum business, it's a slippery slope: The plunge in oil prices that's a boon for most of us is a calamity for others. And it's not just producers overseas taking the hit. Our Cover Story is reported now by Martha Teichner:

The price of oil has dipped below $30 a barrel.

It's all good, right? One big boost to the economy? Well, not so fast. It's also a symbol of a crash. In West Texas, $30-a-barrel oil means a deepening economic disaster.

Each rig represents lots of people out of work, Rasco said. "Your basic crews for the rig itself, you've got 20 people without a job."

On the road between Midland and Odessa, it's all there to see -- the collateral damage caused by low-price oil. The auction lots for heavy equipment no longer needed, for the repossessed cars and trucks of the people who've lost their jobs, the pumpjacks that aren't pumping.

"A gallon of water off the store shelf [costs] more than a gallon of oil," said Rasco. "It's just getting worse."

For starters, demand for oil fell. In the past, OPEC has cut production in response. Not this time.

"Before the oil price collapse, the assumption was that OPEC would underpin the oil price by cutting production," said Daniel Yergin, vice chairman of IHS, an international information company, and the Pulitzer Prize-winning author of "The Prize" (Simon & Schuster, A CBS-owned company), a history of oil. "But the key oil producers in the Gulf -- Saudi Arabia and the other Gulf states -- said that 'We're not gonna cut unless other people cut.'

"Saudi Arabia's basic strategy is to maintain its market share in the global oil market and that's really been the starting point for them" -- and at the expense of everybody else.

So began a huge game of chicken, with Saudi Arabia and its OPEC partners pumping full-blast ... Russia, too.

And the United States? Fracking (pumping water into shale formations to free hard-to-get-at oil and gas) meant that the U.S. suddenly was producing a lot more oil, so much that for the first time in 40 years, we're exporting it.

During the good years, Midland and Odessa, Texas, turned into boom towns. Same story in Williston, North Dakota. Based on $100-a-barrel oil, entrepreneurs borrowed billions of dollars to buy into the bonanza. Workers flocked to the oil patch -- so many they had to live in trailer camps, on cots in church halls.

"I heard about all this big money, so I thought I could get a little piece of that pie, I suppose," one worker had told CBS News.

Then the price crashed, thanks in large part to China's slowing economy. The Saudis and their Gulf state neighbors, with their deep pockets and low-cost oil production, kept pumping, and settled in to wait for their competitors to flinch.

At the World Economic Forum in Davos, Switzerland earlier this month, Khalid al-Falih, the chairman of Aramco, the Saudi state-owned oil company, felt the pain, but said, "If the prices continue to be low, we will be able to withstand it for a long, long time."

Feeling the pain in addition to the U.S., were Russia and Venezuela and, the Saudis hope, Iran, about to come back into the oil market in a big way after the lifting of sanctions.

"It's the Gulf countries are convinced that Iran has a plot to encircle them, and so this is really not just about oil that's going on, but it's really about the future of the Middle East," said Yergin.

Meanwhile, every day, the world is producing something like a million and a half more barrels of oil than it needs. There's an ocean of it out there in massive storage tanks, and right now, at least 100 million barrels are sitting in tankers parked at sea.

This past week, the price of crude rose to nearly $36 a barrel on the merest possibility that the Russians and Saudis might talk about cutting production. But even if it happens, sopping up that surplus will take time, which oil field consultant Mike Rasco knows only too well.

"They picked up my truck. What I do my business out of, my pick-up, it's gone. M y wife through stress has been hospitalized over all of this."

Rasco just wants to hang onto his home. He never lived lavishly, even when he could have, so he could weather the bad times. Born and raised in West Texas, this is the fourth bust he's lived through. He knows it will end. As he looks for work every day, he just wonders when.

Teichner asked, "How hard is it to keep your morale up?"

"It's over. I don't have any morale left," he said. "I'm out of pride. I've got a beautiful wife and two good babies to take care of. I do it because I want to be a good husband. I'll be a good oilman when it comes back around."