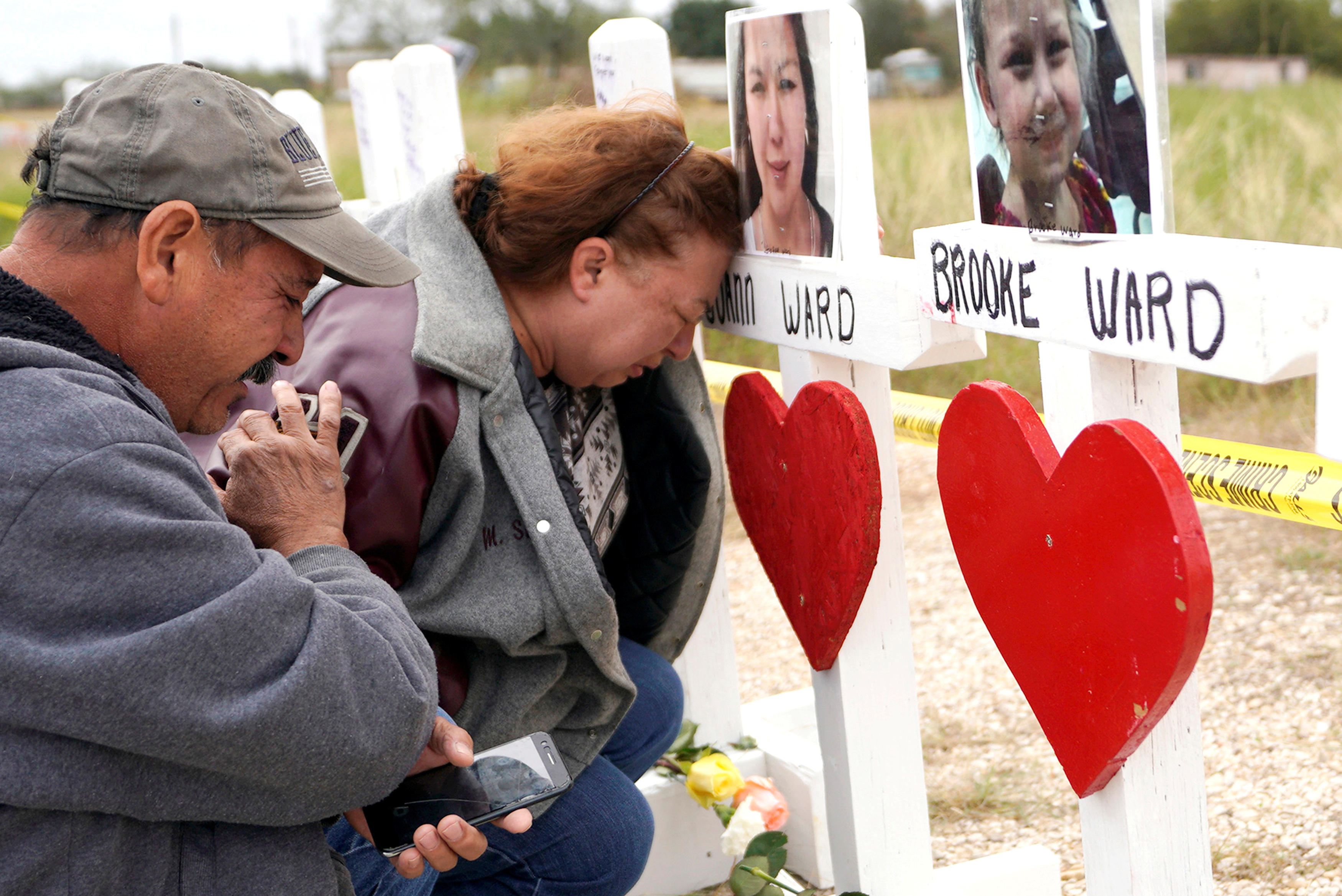 SUTHERLAND SPRINGS -- Two silver hearses carrying the bodies of a couple killed in last weekend's shooting at a Texas church were followed by a long procession of vehicles Saturday that avoided passing the small church where more than two dozen people died.

Mourners instead drove around the tiny community of Sutherland Springs before reaching a cemetery on the edge of town, where dozens more vehicles waited along a rural road for the private burial of Therese and Richard Rodriguez. Sheriff's SUVs shielded mourners at the cemetery's three entrances.

The services for the recently retired couple followed a ceremony earlier in the day where about 100 people gathered to commemorate Veterans Day and to honor the shooting victims, nearly half of whom had ties to the Air Force.

"Maybe this will start the healing process that will get Sutherland Springs and Wilson County to put this horrific tragedy behind us and look to the future," county Judge Richard Jackson, his voice breaking, told the crowd, which included first responders and law enforcement officers.

Jackson, the county's top administrator, thanked the first responders and others who rushed to First Baptist Church in the aftermath of Sunday's shooting. What they saw there will affect them the rest of their lives, Jackson said during the ceremony outside the town's community center, where a wreath was placed near flags to remember those killed.

The gunman killed 25 people -- authorities put the number at 26 because one was pregnant -- and wounded about 20 others. The gunman died of what appeared to be a self-inflicted gunshot wound after being shot and chased by two men who heard gunfire from the church.

Investigators have said the shooting appeared to stem from a domestic dispute involving the attacker, Devin Patrick Kelley, and his mother-in-law, who sometimes attended services at the church but wasn't there the day of the shooting. Kelley had a history of domestic violence: He was given a bad conduct discharge from the Air Force after pleading guilty to assaulting his first wife and stepson.

The church's steward Rod Green and his wife Judy had run-ins with Kelley before the massacre, CBS News Omar Villafranca reports.

"He was a very evil person. A very crazy person," Rod told CBS News. "His actions were sporadic. He bragged about being armed."

Villafranca reports that when Kelley showed up to the First Baptist Fall Festival last month, Rod kept an eye on him looking to see if he was carrying a gun. Judy remembers being alarmed because Kelley had a strange, vacant look.

"I was scared for all our family and all the people there within the hall ... and I was praying, 'Don't let anything happen,'" Judy said.

Villafranca also met Mike Ritch -- in nearby city Adkins -- who helped his fellow Texans after Hurricane Harvey devastated the state.

When the unthinkable happened in Sutherland Springs, Ritch didn't think twice about volunteering in the aftermath of the shooting.

"When disasters strikes or a tragedy happens, you have two choices," he told CBS News. "You can either sit around and wait for help to arrive or you can roll up your sleeves and make it happen ... we rolled up our sleeves."

Adkins held a barbecue to benefit Sutherland Springs. Villafranca says people from as far away as Georgia and Washington were helping the community. Organizers say 100 percent of the proceeds will go to the victims' families and the church.

Sutherland Springs is about 30 miles southeast of San Antonio and not far from several military posts, including Lackland Air Force Base. The Air Force's chief of staff, Gen. David Goldfein, said 12 of those killed were either members of the Air Force or had family ties to it.

Among them were Scott and Karen Marshall, both 56, who had decided to retire in nearby La Vernia after meeting when they were in the service together more than 30 years ago. On Thursday, a military funeral was held for them at Joint Base San Antonio-Randolph.

Retired Chief Warrant Officer Mike Gonzales, who led Saturday's Veterans Day ceremony, moved to Sutherland Springs with his wife to raise their children in 2009. He said many veterans choose to live in the San Antonio area because of its deep military ties, and families tend to migrate to the city's surrounding rural areas.

"We come here to enjoy life, to get quiet and to raise our children," he said. "We've been to war zones and seen that tragedy firsthand. Never did we think that tragedy would strike here."

U.S. Rep. Henry Cuellar told the gathering to lean on one another for support. The Texas congressman said $10 million in federal assistance has been secured to help cover overtime costs for law enforcement agencies involved in the investigation.

Some in the crowd Saturday wore shirts that said "Sutherland Springs Strong" and included an outline of Texas with a heart of the town's location. The shirts were donated by Brenda Bierd, who lives on the Gulf Coast and whose home was damaged by Hurricane Harvey in late August.

"I hadn't even heard of Sutherland Springs before the shooting, but this is what you do," she said. "I just had this feeling I needed to be here."

Among the visitors was Jackie Lee, who said she asked her friends on Facebook if anyone would come with her from San Antonio this weekend. She said about two dozen people quickly said they would.