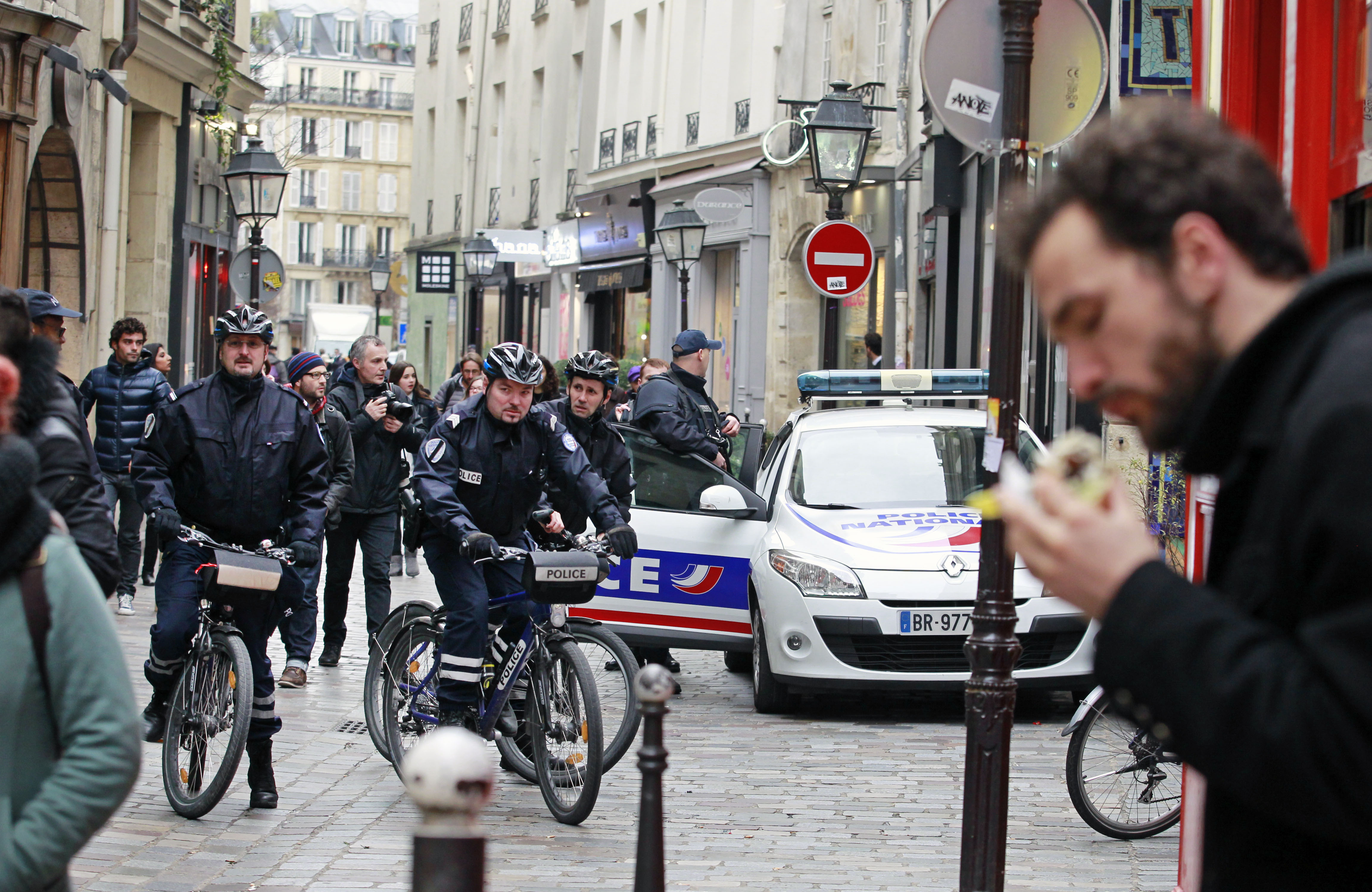 PARIS - As many as six members of a terrorist cell involved in the Paris attacks may still be at large, including a man who was seen driving a car registered to the widow of one of the slain gunmen, police officials said Monday.

Two French police officials told The Associated Press that authorities were searching the Paris area for the Mini Cooper registered to Hayat Boumeddiene, the widow of Amedy Coulibaly. She is now in Syria, according to Turkish officials.

The French police officials spoke on condition of anonymity because they are not authorized to discuss details of the investigation with the news media.

Boumedienne spent five days in Turkey before crossing into Syria, and as Williams reports, if she's gone there to join ISIS or another extremist group, she won't have been the first European woman to do so. Hundreds of young Muslimwomen and girls from Europe have traveled to the war-torn country to join ISIS and al Qaeda.

France deployed 10,000 troops to protect sensitive sites - including Jewish schools and neighborhoods - in the wake of the attacks that killed 17 people last week. Brothers Cherif and Said Kouachi, as well as Coulibaly, their friend who claimed ties to Islamic extremists in the Middle East, died Friday in clashes with police.

Prime Minister Manuel Valls said the manhunt is urgent because "the threat is still present" after the attacks that began Wednesday with 12 people killed at the satirical newspaper Charlie Hebdo. A policewoman was killed Thursday, and four people were slain at a kosher supermarket Friday before the gunmen were killed by police in two nearly simultaneous clashes with security forces around Paris.

A Yemeni reporter says he met one of the gunmen in 2010, saying that the man claimed to have lived with the Nigerian who tried to carry out the failed al Qaeda "underwear bomb" plot five years ago.

Yemeni journalist and researcher Mohammed al-Kibsi said he first met Said Kouachi in the capital, Sanaa, while the gunman was studying Arabic.

Al-Kibsi told The Associated Press on Monday: "He was very polite and had a sense of humor so for me I could not expect that a few years later he would be the suspect of a terror attack."

The journalist said that Kouachi said that he had lived with Umar Farouk Abdulmutallab, convicted of trying to blow up a Detroit-bound airliner.

Paris' Marais district - one of the country's oldest Jewish neighborhoods - was filled with police and soldiers by midday Monday. About 4,700 of the security forces would be assigned to protect France's 717 Jewish schools, Interior Minister Bernard Cazeneuve said.

"A little girl was telling me earlier that she wanted to live in peace and learn in peace in her school," Cazeneuve as on a visit to a Paris Jewish classroom, where the walls were covered with children's drawings of smiling faces.

"That's what the government, that's what the Republic, owes to all the children in France: security in all schools, especially in the schools that could be threatened," he added.

The children listened and waved both Israeli and French flags.

Defense Minister Jean-Yves Le Drian said the nationwide deployment of troops would be completed by Tuesday and would focus on the most sensitive locations.

"The work on these attacks, on these terrorist and barbaric acts continues ... because we consider that there are most probably some possible accomplices," Valls told BFM television.

French police have said the Charlie Hebdo attacks were carried out by three people, but only two of those attackers - Cherif and Said Kouachi - have been identified by authorities.

Video emerged Sunday of Coulibaly explaining how the attacks in Paris would unfold. French police want to find the person or persons who shot and posted the video, which was edited after Friday's attacks.

Boumeddiene was seen traveling through Turkey with a male companion before reportedly arriving in Syria with him on Jan. 8 - the day after the Charlie Hebdo attack and the same day Coulibaly began his murderous spree by killing the policewoman.

Security camera video footage shown Monday by Turkey's Haberturk newspaper showed Boumeddiene arriving at Istanbul's Sabiha Gokcen airport on Jan. 2. A high ranking Turkish official, who spoke on condition of anonymity, confirmed that the woman on the video was Boumeddiene.

Turkish intelligence then tracked Boumeddiene from her arrival.

Turkish Foreign Minister Mevlut Cavusoglu told the state-run Anadolu Agency that she had stayed at a hotel in Istanbul with another person before crossing into Syria on Thursday. She and her traveling companion, a 23-year-old man, toured Istanbul, then left Jan. 4 for a town near the Turkish border, according to a Turkish intelligence official who was not authorized to speak on the record.

Her last phone signal was on Jan. 8 from the border town of Akcakale, where she crossed over apparently into Islamic State-controlled territory in Syria, the official said. Their Jan. 9 return plane tickets to Madrid went unused.