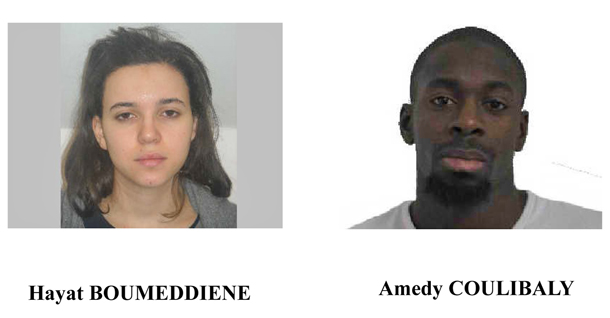 LONDON -- Video emerged Monday purportedly showing the widow of one of the slain Paris terror suspects arriving in Turkey just a week before her common-law husband died in a police raid on a Jewish grocery store where he was holed up with hostages.

Hayat Boumeddiene, 26, was listed on an arrest warrant released by French police last week as they hunted for her and her partner, Amedy Coulibaly, who died in the Friday grocery story raid after allegedly killing four hostages.

Coulibaly and Boumeddiene were already being sought in the murder of a police officer, allegedly gunned down by the latter on Thursday as police scoured the French capital for the two suspects in the attack on the satirical newspaper Charlie Hebdo the day before.

The video which surfaced Monday shows a young woman who resembles Boumeddiene arriving at Istanbul's Sabiha Gokcen airport on January 2 after a flight from Madrid, and she is not alone. A man, identified by Turkish media as French national Mehdi Sabry Belhoucine, is seen accompanying her.

Some reports suggested Belhoucine is known to French anti-terrorism officials, but CBS News has not independently verified the identities of either of the individuals in the video.

CBS News' Holly Williams reports that intelligence officials believe Boumedienne may have crucial information about whether her boyfriend and the two Charlie Hebdo attackers, French-Algerian brothers Said and Cherif Kouachi, were part of a bigger terrorist cell in the French capital.

Undated photos from social media sites obtained by French newspaper Le Monde show Boumedienne and Coulibaly holding weapons. Boumedienne is known to have exchanged hundreds of phone calls with one of the Kouachi's wives, showing a close relationship prior to the attacks.

The level of coordination between the Kouachis in their Wednesday attack on the newspaper and Coulibaly's actions, which began the following day, remains unclear.

While the Kouachis told multiple witnesses they were members of al Qaeda in the Arabian Peninsula (AQAP), the terror network's Yemen branch, Coulibaly said in a video released over the weekend that he was with the Islamic State of Iraq and Syria (ISIS).

On the battlefields of Syria and to a lesser degree neighboring Iraq, ISIS and al Qaeda's local franchise (al Nusra) are bitter enemies.

Turkish officials insisted on Monday that Ankara was not to blame for allowing Boumedienne to pass through the country into Syria, saying that without prior warning from European counterparts, Turkey's border services do not block individuals from entering.

"There was no notice from France on this person stating that she is dangerous and she should be banned from entering the country," Turkish Interior Minister Efkan Ala told reporters. "Turkish police and intelligence services are in talks with French institutions and briefing them on the details."