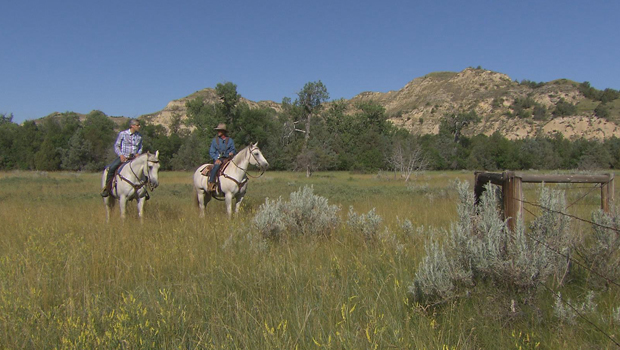 The Elkhorn Ranch occupied a remote and empty patch of the North Dakota Badlands. And to this day it occupies an important part of a former U.S. president's legacy. Mo Rocca is our guide:

"He was the happiest man on the planet -- his wife had just given birth to a baby girl," said his great-grandson, Ted Roosevelt IV.

But then came some distressing news: "He gets a telegram saying, 'Come back immediately. Your wife is dying and your mother is dying.'"

The future president rushed home from Albany to Manhattan to find the two most important women in his life suddenly fallen ill -- his mother, Martha, with typhoid fever; and his young bride, Alice, with Bright's disease, a failure of the kidneys.

"His younger brother, Elliott, ran out of the house and said, 'There is a plague on this house,'" said Ted.

Roosevelt got there just in time for his wife to die in his arms. His mother died shortly later.

"It was just, it was just awful," said Ted Roosevelt.

"The light has gone out of my life," the future president wrote in his diary that grim Valentine's Day: a stark "X" and eight simple words.

So Roosevelt headed west, to the wildest, loneliest place he knew -- the Badlands of the Dakota Territory (in what is now North Dakota).

It was land Roosevelt described as "a bizarrely-shaped country with a haunting, melancholy beauty."

For three years he lived there, along the Little Missouri River, in the shade of the cottonwood trees.

"There is no sound that is more soothing than the wind going through the cottonwood leaves," said Ted. "It makes a lovely rustle, it's just beautiful."

At the site of the Elkhorn Ranch today, one sees the same trees TR saw from his front porch -- and hears the same kind of birds he heard.

"Hear that dove in the background?" said Ted. "TR wrote about the dove: 'There can be no more mournful sound of unending grief than the sound of a mourning dove.'"

The ranch house the Old Lion built with his own hands is gone now. Only the foundation stones remain.

Two guides he'd befriended in the woods of Maine came west to help.

"He was good with an axe, but he overheard the two guys talking amongst themselves," recalled Ted, "and they said something to the effect, 'We chopped each down 35 trees, and the boss, he beavered down 17.'"

"It's still impressive -- the formerly asthmatic child is beavering down 17 trees!" said Rocca.

Indeed: Roosevelt was a sickly child who, by non-stop activity, bulldozed through obstacles -- the embodiment of "the strenuous life."

Rocca asked Ted, "Talking about Theodore Roosevelt's energy, please don't take this the wrong way, but was there some sort of chemical imbalance? I mean, just his ability to do so much?"

"You know, that's a great question. He wrote, I think poignantly, 'If a man rides hard and fast enough, he can leave black care behind him.' He knew that he had to really engage himself all the time because he might get depressed."

He became a cattleman, albeit a Harvard-educated aristocratic one.

"The people out west -- and this was really out west then -- must've thought he was from a totally different world," said Rocca.

"Yeah, a totally different world. He wore glasses, which was unusual. He dressed in a fancy way. He used language in a way that was totally different than theirs. But the experience was one which rubbed off this sort of thin, brittle veneer of the eastern dude. And he became a regular guy."

And this wild, beautiful land shaped the way Roosevelt viewed the environment. That's why it's known as the "Cradle of Civilization."

"It's where he learned and he saw first-hand the need to save the land," said Ted.

But today, the view from the Elkhorn Ranch, virtually unchanged for more than a hundred years, is indeed beginning to change, as North Dakota's oil boom encircles the site with pump jacks, gas flares, and roadways.

"There is a rig there on the ridgeline that would not have been here in Teddy Roosevelt's day," said Stephanie Meeks, President and CEO of the National Trust for Historic Preservation. "It's one of seven wells that are within the historic district."

The National Trust has placed the Elkhorn Ranch on its Most Endangered Places List.

"It's a visual intrusion in a place that was one of solitude," said Meeks. "So we'd like to protect anything that Teddy Roosevelt could have seen from the front porch of his cabin."

It's not just the sights that are threatened, but also the sounds that soothed TR's wounded soul.

"That's what we want to preserve," said Ted Roosevelt IV. "It's the solitude, the scenic beauty of this and the sound."

The man who would go on to create five national parks and protect 230 million acres of land once said, "I never would have been president if it had not been for my experiences in North Dakota."

"He wanted to protect great landscapes for the American people for all time," said Meeks, "and it's our turn now to protect this landscape, so that it can influence and inspire people for generations, just as it did Teddy Roosevelt."


More about the presidents from Mo Rocca:

Advertising messages during coronavirus
Thanks for reading CBS NEWS.
Create your free account or log in
for more features.
View CBS News In
CBS News App Open
Chrome Safari Continue
Be the first to know
Get browser notifications for breaking news, live events, and exclusive reporting.