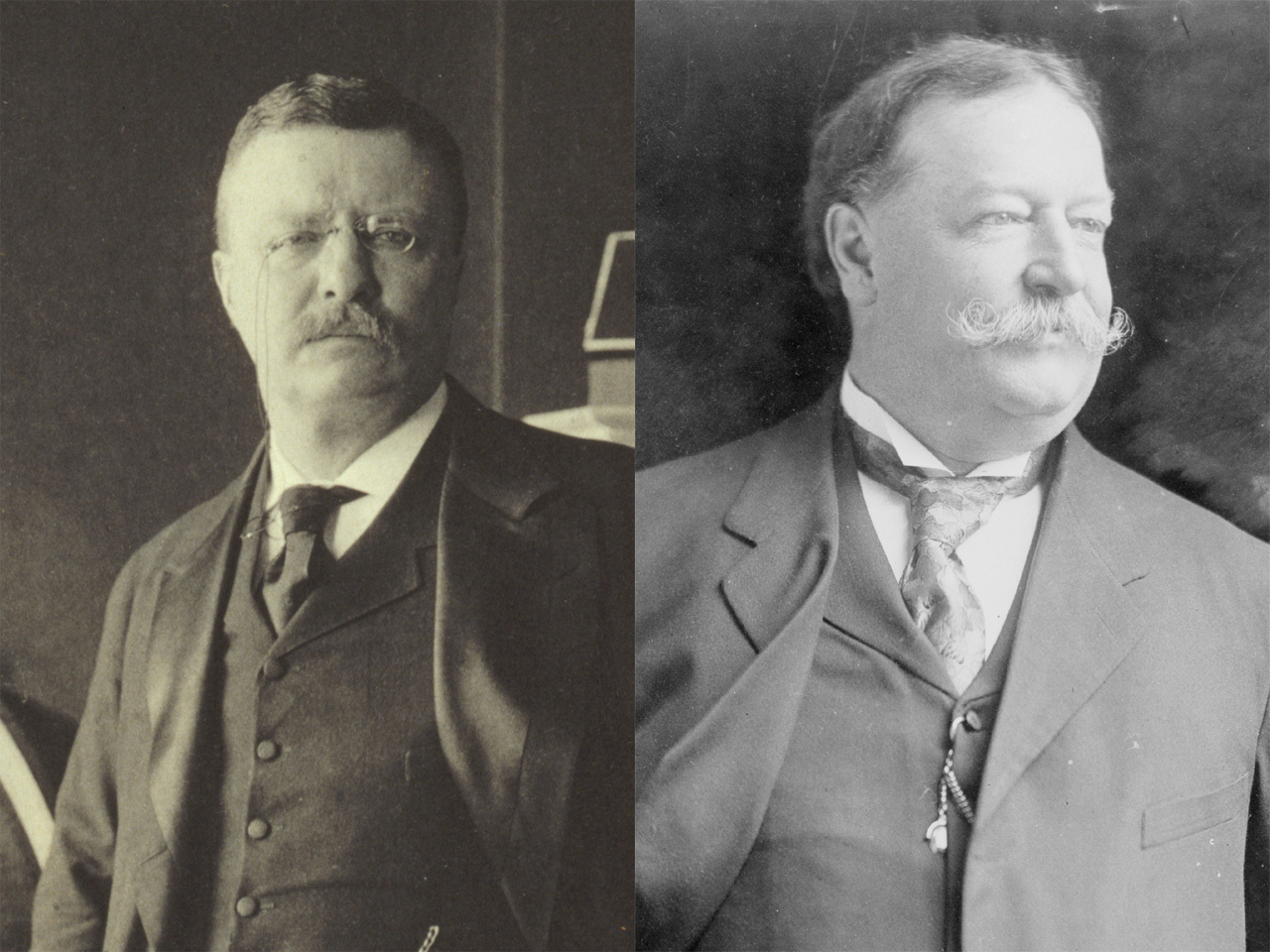 (CBS News) America's past presidents are anything but musty, half-forgotten figures for one distinguished writer. For her, they're a part of living history. Mo Rocca now, and a chat with Doris Kearns Goodwin:

"Do your kids or your husband ever say to you, 'Doris, you've got to stop living in the past'?" asked Mo Rocca.

"Every now and then," laughed Doris Kearns Goodwin," author of ""The Bully Pulpit: Theodore Roosevelt, William Howard Taft, and the Golden Age of Journalism." "I remember when I was writing 'Franklin and Eleanor Roosevelt,' and my kids said they would come by the room. And I was yelling at Franklin, 'Would you please be nicer to Eleanor!' or saying to Eleanor, 'Forget about the fact that he had an affair 20 years ago.' And they're thinking, 'What is going on in that room? She's talking to dead presidents!'"

And dead presidents have been very good to Goodwin.

All of her presidential biographies have been bestsellers. She won a Pulitzer for her book on FDR and Eleanor Roosevelt. And her Lincoln biography was the basis of the Steven Spielberg movie.

Her newest book is about the friendship between Presidents Theodore Roosevelt and William Howard Taft -- unusual for Goodwin, in that one of them is not a larger-than-life president, although he certainly was large.

"How many people are going to know much about Taft other than that he weighed 350 pounds, and he had a bathtub [that could fit four]?" said Goodwin. "And indeed, there's a picture of the bathtub with the four guys in there."

"That is a White House scandal waiting to happen," said Rocca.

The two men were a study in contrasts: Roosevelt, a contemporary wrote, barreled through life as if launched by a catapult.

"I've never written about anybody who has more energy, accomplished more," said Goodwin.

Conversely, she called Taft "the great procrastinator. He waited 'til the last minute for everything, and it got him in trouble over and over again. So I keep saying to myself when I'm about to put something off, 'I don't want to be Taft in this, I wanna be Teddy!'"

Hearing of Roosevelt's accomplishments, Rocca opined, chipped away at his self-esteem: "I mean, he does more in a page than I get done in a year," he told Goodwin.

"One of my friends thought he drank 40 cups of coffee a day -- I haven't quite confirmed that," she replied. "But he did give the slogan to Maxwell House, 'Good to the very last drop.'"

To push through his progressive agenda, Theodore Roosevelt forged a winning partnership with like-minded reporters, whom he dubbed "muckrakers." It was a time Goodwin describes as the "golden age of journalism."

"He wrote to them all the time," she said. "They were at the White House, they had lunch, they had dinner with him, they had breakfast with him."

To keep them close, Roosevelt even gave them their own White House press room.

LBJ would be the first of Doris Kearns Goodwin's "guys," as she calls her presidential subjects. She would get to know him while he was still very much alive. Their relationship began when she met the president at a dance, when she was a 24-year-old White House intern. "It used to be a badge of honor to say you were a 24-year-old White House intern," she said. "It's gotten a little more complicated."

LBJ asked her to dance, then told her he wanted her to work directly for him. But there was something he didn't know:

"I'd been a graduate student at Harvard, and I wrote an anti-war, anti-LBJ piece that came out in The New Republic several days after the dance," Goodwin said.

"I was sure he'd kick me out of the program, but instead surprisingly he said, 'Oh, bring her down here for a year, and if I can't win her over, no one can.'"

What does she think Johnson saw in her? "He saw a young girl, I think, think to be honest," Goodwin said. "I mean, he was somewhat of a womanizer. But he also saw someone who loved history, he saw someone who liked to listen to him -- he loved to talk."

And Goodwin would do a lot of listening, when she moved to LBJ's ranch to help him write his memoirs after he left office.

"He couldn't sleep, and so he'd come into my room. And I would know that he was coming in so I would get up even earlier. And then he'd come into the bed, 5:00 a.m., he'd pull the sheets up. Mornings were hard for him because he was thinking about all that he had lost. And I would sit in the chair and he'd just talk to me."

"Now, you're sitting in a chair in your room and a former president of the United States is in your bed with the covers up to his neck kind of soliloquizing?" Rocca said.

"Telling me stories, yeah. Exactly" laughed Goodwin. "I mean, it seemed natural then. Now I look at it, "Oh, my God, what was going on?'"

She says she never worried about things going too far . . . except once.

"One day he invited me to go on a picnic by the river -- red-check tablecloth, wine and romantic trappings," she said. "And I think, 'Oh, my God, what's gonna happen?' And he says, 'Doris, more than any other woman I've ever known --' And my heart sank. And then he said, 'You remind me of my mother.' It was so embarrassing given what was going -- and she was this big, buxom woman! No way! Except she was an intellectual and loved reading, and she would have been, he thought, a great writer."

What Goodwin saw and heard was a man who, outside the Oval Office, felt like the shell of a man.

"I think I saw in LBJ a man for whom, even though his family loved him, there was such a hole in his heart that needed to be filled by the love of millions of people, by the crowd," she said. "There were no sports in his life, no recreation -- work was the center."

LBJ's was the model of a life Goodwin didn't want to lead. She married White House speechwriter Richard Goodwin and raised a family.

"We have three boys, and I realized I couldn't do it all. So I gave up teaching and I just became a writer. I'm still going to Red Sox an unimaginable number of days. We have season tickets!" she laughed.

She lives in historic Concord, Mass. Most of the rooms in her house, it seems, are libraries, including a corridor of presidential biographies -- the Goodwin Presidential Library!

Even the most successful presidents face controversy. So, too, this presidential historian. In 2002 it was revealed that Goodwin had used passages from other books in her 1987 book on the Kennedys without full attribution. Goodwin blamed her mistakes on sloppy note-taking.

Was that an ordeal? "Of course, of course, because I care so much about my fellow writers, it is nothing that I ever intentionally would have done, so it felt bad. And the best thing you can do is to learn from your mistakes and just make sure that you know how to do it right, and I have."

At the Teddy Roosevelt Birthplace in New York City, Goodwin remembered how her love of history got started:

"If you come here as a kid, as I did at Sagamore Hill or FDR's place in Hyde Park, you can imagine them living here.

Her mission now: to make dead presidents come as alive for her readers as they are for her.

"If you had to be one of these guys, which would you be?" asked Rocca.

"Probably, no question, Teddy Roosevelt," Goodwin said. "I would venture to project that he was the happiest president we've had. He loved what he was doing, he loved his family, he loved getting up in the morning. He had that energy."

As for the Teddy-Taft friendship, it broke apart when Roosevelt decided to run against Taft in 1912 under a third party. The two split the Republican vote; Woodrow Wilson swept into power.

Recently, baseball fanatic Goodwin had the chance to broker a truce.

"I suppose part of my dream is that I could bring them back together somehow," she laughed. "So it was amazing. I went to the Washington National Stadium, and they have these two mascots: Taft and Teddy. So I was able to stand and get them to go together, so my dream was realized. I look like am absolute midget, they are so huge. I look even shorter than I actually am, but it was such a great day."

The Doris Kearns Goodwin Peace Accord!