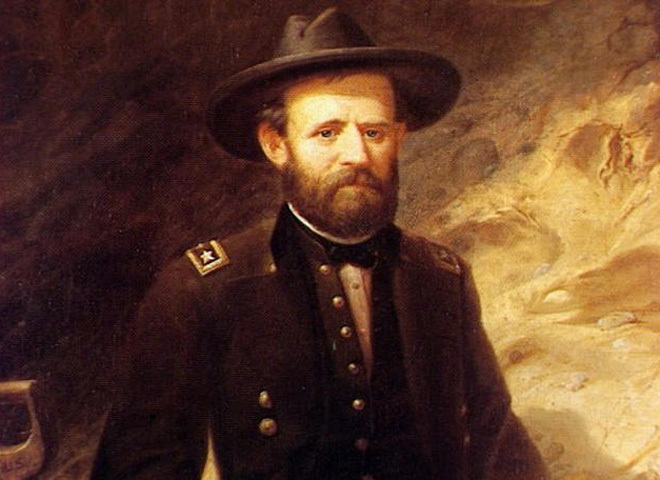 (CBS News) Ulysses S. Grant, the man who led Union forces to victory in the Civil War, served two terms as President. Mo Rocca has the story of his final battle:

If you're looking for the place where Ulysses S. Grant breathed his last, just follow the signs for Upstate New York's Mount McGregor Correctional Facility. Once you're past security and up the hill, you will indeed find yourself surrounded by the grounds of a medium security prison, complete with razor wire.

Unusual as this setting may be, it's what happened inside the cottage that's truly remarkable.

"Grant came here because it was incredibly hot in New York City during the summer of 1885," said Tim Welch, who runs the Grant Cottage Historic Site. "And his advanced tongue and throat cancer was so painful, and he was suffering."

Yes, when the general and former president came here he was dying of throat cancer -- and he was broke.

"He had only $189 in his checking account as a result of his son getting him into a Ponzi scheme," said Welch.

For years, the man who'd led Union troops to victory in the Civil War, had declined offers to tell his story in print; he didn't consider himself a literary man. But now he was being offered $50,000 and 75 percent of sales by an admirer of his, author Mark Twain.

"Mark Twain was a great fan of Ulysses Grant -- and he made no secret of his admiration for Grant," said Grant biographer H.W. Brands. "So when he heard that Grant was thinking about writing a book-length memoir, he thought that it would be a great idea if he, Twain, could be the one to publish it."

It was an offer Grant couldn't afford to refuse. But time was running short.

"Everybody in the United States knew that Grant was dying," said Brands. "The nation, in a very basic way, held its breath to see who would win this race."

Welch said Grant had a "mission," that completing his memoir was "the only way he was going to bail out his family from the poverty that he had inflicted on them."

The cottage looks eerily like it did during the five weeks Grant spent here, writing. Welch said the former president would sit with his legs propped up, a pad in front of him. "He couldn't lay down," Welch said. "He would choke because of his tongue and throat cancer."

Many of his personal effects are still there: his bedclothes, his hairbrush, and of course, his "cocaine water."

"It was used to bathe his throat and his tongue, to give him some relief from the pain," Welch explained.

"Is that sediment down there, is that cocaine?" Rocca asked.

"That's cocaine, and every year the New York State Department of Parks and Recreation measures this and makes sure that none of it is gone," Welch said.

"You're not kidding?" asked Rocca.

"No, I'm quite serious," Welch replied.

Grant was in too much pain to talk to his family or visitors, so he wrote notes: "I have such difficulty in speaking that I am no company."

But the memoir writing came easier than he may have expected. The words seemed to flow.

"He discovered that he really did have a facility for it," said Brands. "When Grant says that he could write 10,000 words in a day, and the words hardly needed any revising at all, you know, I and other writers are just sort of put to shame by this. And he was dying of cancer at the time. It's a remarkable feat of writing."

And one he finished only days before dying.

Welch showed Rocca a clock that was stopped by Grant's son, Col. Fred Grant, at the moment doctors said President Grant had breathed his last: eight minutes after eight o'clock, July 23, 1885. Flower arrangements, encased in bee's wax, have been there for 127 years -- mementos of the outpouring of grief that came from every part of the country.

How admired was Grant? Two of the pallbearers at his funeral were former Confederate generals.

As for the memoir? At more than 600 pages, it was a runaway bestseller. The family was saved from financial ruin. "The memoirs brought in ultimately something like $400,000 in cash, which is millions and millions of dollars today," said Ulysses Grant Dietz, the general's great-great grandson.

"It was a point of pride that the family clung to for generations -- still do, I suppose," said Dietz.

Brands called Grant's memoir "the first really successful celebrity memoir in American history. It was the first published memoir by a president that made an impact."

Its success would have surprised no one more than Grant.

"He was a very modest man, despite the great accomplishment he made, despite the fact that he was the hero of his age in the United States," said Brands. "And by the time he died he was one of the most famous men in the world. But he still thought, 'It's just an amazing thing that I became the commanding general of the U.S. Army, then I was twice elected President of the United States.' I think it would have astonished him that he would, in addition to that, have been considered to be one of the great writers in American history."

WEB EXTRA: History has told us that the man who led Union troops to victory in the Civil War was a failure in the Oval Office. But history is wrong! Mo Rocca learns the truth about the man who saved the Union twice.