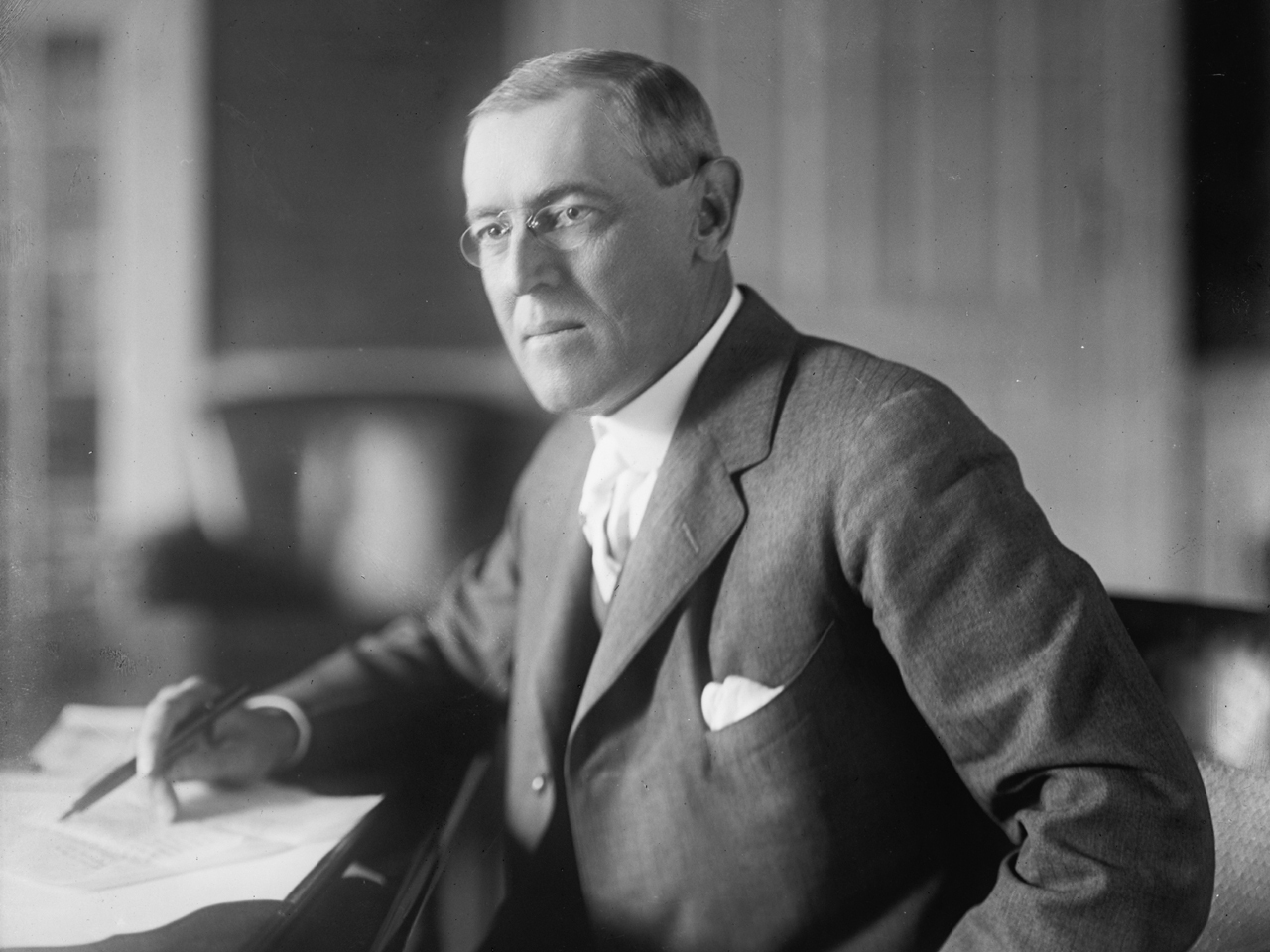 (CBS News) President Woodrow Wilson was actually born with the first name "Thomas" -- just one of the things you may not have known about the president who took office a full century ago. Here's Mo Rocca:

When you hear the name Woodrow Wilson, you might think: aloof, intellectual, the professor-turned-president with the pince-nez for glasses.

"He was the college professor with the pince-nez -- a French word! -- so he's easy to bash," said author A. Scott Berg.

But in his new biography of the 28th president, A. Scott Berg wants you to know that Wilson was no cold fish.

"Woodrow Wilson was an extremely emotional, romantic man," he told Rocca. "I don't think there's been a more emotionally turbulent presidency than Wilson's."

Born in Staunton, Va., the son of a Presbyterian minister, Wilson imbued everything he did with moral purpose.

"It's quite amazing: I mean, here's Woodrow Wilson at nine years old drafting a constitution for his Little League baseball team!" Berg laughed. "It's got to be the only Little League team, to this day, with its own constitution."

For college he ventured north to New Jersey, to what would become Princeton University.

Berg said it was true that before arriving at Princeton, he had never heard "The Star-Spangled Banner." "He was a southern boy," Berg explained.

Wilson would return to Princeton as its president, transforming what had become something of a country club into a first-rate university.

The political bosses of New Jersey took notice, and made him an offer he couldn't refuse, one Berg called "irresistible": to run for governor of New Jersey.

At the time, Rocca said, New Jersey was "perhaps the most corrupt state in the union."

"I think you can take the 'perhaps' out of it," Berg responded. "In 1910, the very corrupt Democratic machine of very corrupt New Jersey says, 'Who is the squeaky-cleanest man in all of New Jersey we could run as our puppet?' "

But Wilson would be nobody's puppet.

"He does get elected, and the first thing he does is kick out the machine," said Berg. "And now, everybody in the country is saying, 'Who is this?' "

Within two years later, he was elected to the White House.

Turned out our only president with a Ph.D. knew how to connect with the masses. Berg said Wilson never "spoke down."

"He always raised the audience to his level. This had a magical effect, especially on the uneducated, because they felt better about themselves for having heard him and understood him."

Wilson didn't just go to the people; he went to Capitol Hill, becoming the first president in 110 years to address Congress in person. He would do so 25 times.

His progressive agenda sailed through: The establishment of the Federal Reserve; the eight-hour work day; workman's comp.

But on one issue he was decidedly unprogressive: Under his watch, the District of Columbia and the federal government were segregated racially.

"Woodrow Wilson didn't invent segregation, but he certainly institutionalized it in the government offices in Washington D.C.," said Berg, "which, in effect, sanctioned segregation throughout the country."

By 1914 the world was at war. The United States remained neutral at first. Meanwhile, Wilson's own world was crumbling. His wife, Ellen, lay dying.

"There's a moment where he's literally writing a letter to the heads of state in Europe saying, 'Must you really proceed with war?' He's writing that with one hand, and holding his dying wife's hand with the other."

But only months after her death, Wilson would fall madly in love with widow Edith Bolling.

Bolling was the first woman with a driver's license in the District of Columbia. "She had wheels, yeah, she did," said Berg.

Wilson lobbied hard for her.

"Who has time to write three love letters a day while the world is falling apart?" asked Rocca.

"Well, Woodrow Wilson made the time," Berg said. "He would tell you, that this was more important, because he couldn't serve as president unless he had the woman he loved, basically."

Wilson wooed her during long drives in his own car, a 1919 Pierce-Arrow. Edith became the second Mrs. Wilson.

"She was buxom, yes," noted Berg. "And don't think Sigmund Freud didn't make a lot of that when he wrote about Wilson and his marriage."

"Oh, that he needed kind of like a mothering thing?" asked Rocca.

Wilson was re-elected as the man who kept us out of war. Within weeks of his second inauguration, he would declare, "The world must be made safe for democracy."

"It is an about-face, and it is the underpinnings of our foreign policy to this day," said Berg.

America sent two million doughboys to Europe and defeated the Germans. In Europe, Wilson was welcomed as the savior of the world.

"It was bigger than anything Napoleon saw [or] Caesar saw," said Berg. "Now, does all that adulation somehow affect you? I think he remained a preacher's son, with a Christ complex!"

He would spend six months in Paris. Wilson's mission: to establish a League of Nations to prevent all future wars. He believed, said Berg, that an international parliament, where every nation could sit, could ostensibly stop all war.

But the U.S. Senate balked, so Wilson took his case to the people -- a grueling, 29-city tour.

Outside Pueblo, Colo., he collapsed. Days later, he suffered a stroke and took to his bed, the left side of his body paralyzed.

Edith took control -- how much control is still debated.

"Was Edith Wilson the first female president of the United States? She would be the first to tell you she made no decisions he would not have made," said Berg. "That being said, nothing got to the president without passing through Edith's hands first."

But even she couldn't convince Wilson to compromise on even minor details concerning the League of Nations. The Senate would vote down Wilson's peace plan; the U.S. would not enter the League, dooming it.

Rocca asked, "Do you think it could have prevented World War II?"

The most lasting piece of the Wilson legacy, said Berg, "has to be that one line: 'The world must be made safe for democracy.' For good or for bad, that really has become the foundation of our foreign policy. And whenever this country even thinks of intervening, in Syria or in Egypt or Iraq or wherever, it's really that Wilson notion, that there is a moral obligation."