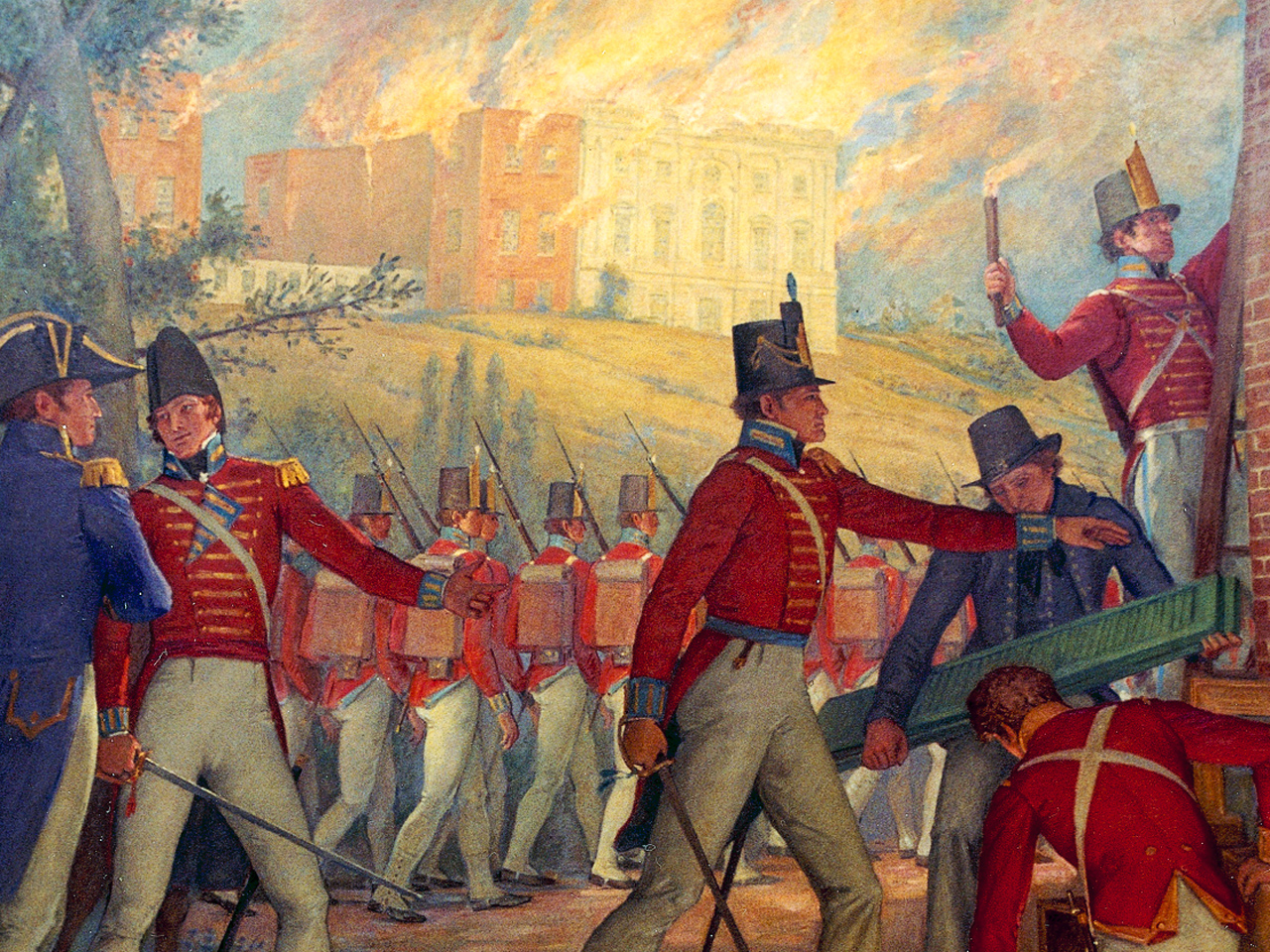 Two centuries ago this past week, smoke and ash lingered in the air of what remained of our nation's capital. Mo Rocca takes us back to that fiery night:

Two hundred years ago this month, 4,000 British soldiers lay siege to Washington, D.C., and set fire to the U.S. Capitol and the White House.

And the burn marks on the White House walls are still there.

"We now have evidence of the char marks, the scorching that would have happened when flames were drawn out through open windows and doors and licked up around the tops of the stone," said William Allman, the White House curator.

It is, as far as we know, the best evidence the one time enemy's forces were in our nation's capital, said Allman.

The burning of Washington was the darkest moment for the United States and President James Madison in the War of 1812 -- a sort of second war of American independence.

The British had been interfering with American trade at sea and kidnapping sailors. American efforts to expand westward and north into Canada were being thwarted by the British. Two years into the war, with the Americans in retreat, British forces reached the nation's capital.

"Miserable," said William Allen, historian emeritus for the Architect of the Capitol. "Tiny, small, strung out."

It was basically, he said, a construction site: "There were stone yards and brick yards and kilns. It was just a mishmash of this and that."

The Capitol dome hadn't yet been built, but the original House chamber -- located on the site of today's Statuary Hall -- was an architectural masterpiece.

"Many people described it as the most beautiful room in America," said Allen. "It had this glorious ceiling with 100 skylights."

"The heat was intense. The glass in the skylights melted, became molten, and fell down in large chunks."

The Capitol's stone walls survived, as well as the Senate vestibule, with its distinctive corn cob columns.

Allen said the corn cob was significant as "the American plant, in a classical way. Sort of thinking the way classical architects would have thought, using this very important staple of the American diet and the American economy."

Fighting with the British that night were former American slaves:

"The British brilliantly exposed a real weak side in American society, and that was slavery and our dependence on slaves," said historian Steve Vogel, author of "Through the Perilous Fight," a blow-by-blow account of Washington's capture. "They offered freedom to slaves in this region, the Chesapeake. Said, you know, 'Come over to our side. We promise you freedom. And if you want to, by the way, you can fight against your former masters.'"

Rocca asked Allman what the Britons' impression of the White House would have been as they walked in the door: "I think that it was a pretty good-sized house, but not a palatial one. No Buckingham Palace. No Versailles. That it was, you know, reasonably well decorated."

The biggest surprise? A dinner set for 40. So the British feasted in the White House dining room before burning the mansion down.

Here, too, the walls survived. But little remains of what was once inside -- what does is an American icon.

The East Room, the largest room in the house, and where Teddy Roosevelt's kids used to roller-skate; where Susan Ford had her senior prom; and more importantly, the room with the great full-length portrait of George Washington by Gilbert Stuart.

"This is the one that Dolley Madison rather famously saved before leaving the White House. She had already packed up state papers, the red velvet drapes that she had had put in the Oval Room. Then, kind of as a last-minute thing, she said, 'Oh, we've got to save General Washington.'"

"And she gave the instructions to get it off the wall. It was bolted on. So they had to pretty much cut the frame open and then lift the canvas out on its stretcher."

As Dolley Madison was busy cramming silverware into her purse, White House servants -- the maitre d' and one of the family's slaves -- rescued the painting. "She was trying to save everything she could," said Allman. "She was leaving her personal things."

As a rule the British invaders didn't loot, but one soldier grabbed Madison's personal traveling medicine chest. "That was taken from the White House by one of the British troops, later passed to a member of one of the naval forces, and then descended in his family until it was given to Franklin Roosevelt in 1939," said Allman.

After torching the White House, the redcoats burned the buildings housing the Departments of State, Treasury and War, concluding one of the most devastating days in American history.

"Can you imagine the scene after the British have departed Washington?" said Vogel. "The Capitol and the White House are smoldering shells. The American Army has abandoned the city. Nobody knows where President Madison or the cabinet are. It's really impossible to think of many more despondent, desperate moments in American history."

As a Union Jack flew over the city, Vogel said, "A lot of people felt that, you know, the young republic was coming to its end, that the American experiment was dying in its infancy."

Fearing an American counterattack, the British occupation of Washington lasted only a day.

Among its overlooked heroes: State Department clerk Stephen Pleasonton, who hid the Declaration of Independence in a Virginia mansion.

Six months later, the war ended in a virtual stalemate, and British leader George Cockburn returned home, where his portrait features Washington blazing in the background.