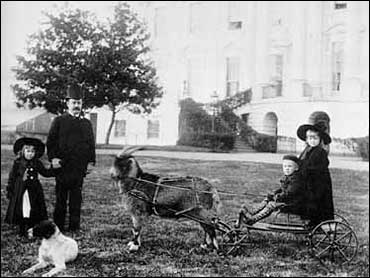 Who should President-Elect Obama nominate to be the next First Pet? Contributor Mo Rocca has some ideas:

It's taking Barack Obama longer to select a dog than a cabinet.

Why all the fuss?

The dog sends a message about who the President is - which is why no Commander-in-Chief has ever chosen a pit bull (too hawkish) or a Bichon-Frise (too non-hawkish).

It's an important decision, which is why I say that President-elect Obama shouldn't choose a dog at all.

No, I'm not nominating a cat! Cats flout authority, and early on it's crucial that a President project authority.

Besides, White House cats have never been popular. Who was the White House pet when the Democrats lost Congress in 1994? Socks Clinton.

And Bush's cat India? You didn't even know he had a cat named India!

If Barack Obama is really about change, he needs to break with the recent past and boldly venture forth into the distant past - when Presidents had real pets.

George Washington had a Spanish donkey that sired a race of "supermules" for the President. In a struggling economy, what could send a better message than a "supermule," the pet that pulls its own weight?

If Obama wants to invoke Lincoln, then how about getting his daughters a couple of goats, like Nanny and Nanko? Or Benjamin Harrison's goat, Old Whiskers? I'm sure the White House can source a hypoallergenic goat for Malia.

Or perhaps he should take a page from his team of rivals, John McCain and his hero, Teddy Roosevelt, a man who had 36 pets, including Maude the pig, Josiah the badger, Baron Spreckle the hen (presumably a Baroness), a hyena, a macaw and my favorite, a one-legged rooster.

Teddy was an asthmatic child who grew up to become our most robust president. I like to imagine that rooster, against all odds, hopping up San Juan Hill.

Fellow professor-turned-President Woodrow Wilson had a Ram named Old Ike that died of a nicotine addiction from eating cigarette butts. A ram could be a wonderfully soft playmate - and a good reminder of why Obama really needs to quit smoking.

If Caroline Kennedy is consulted, she'll recommend a pony, like her own pony Macaroni.

I always wanted a pony. (Sasha and Malia, if you're watching, push for the pony! If your daddy loves you, he'll give you a pony.)

How about sending a message to lobbyists with your pet? Dwight Eisenhower caught flack when his chief of staff accepted a vicuna coat. How about a pet vicuna that you don't turn into a coat?

Calvin Coolidge had a raccoon named Rebecca, and a wallaby. (I think it would be neat to have a pet with a pouch.)