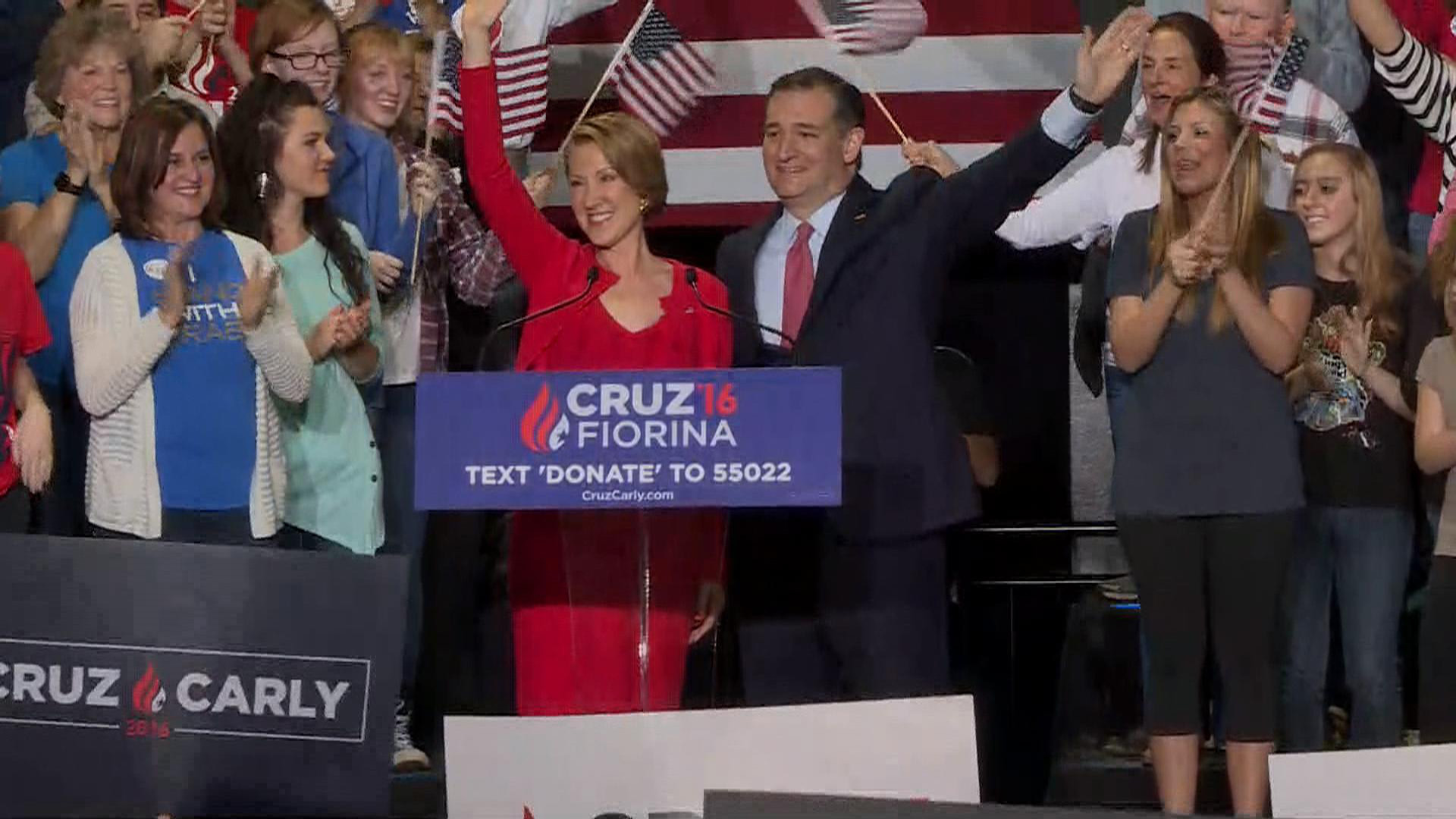 Ted Cruz announced Wednesday afternoon that he has chosen Carly Fiorina to be his running mate in the 2016 presidential campaign.

"After a great deal of time and thought, after a great deal of consideration and prayer, I have come to the conclusion that if I am nominated for president of the United States that I will run on a ticket with my vice presidential nominee Carly Fiorina," Cruz announced at a rally in Indianapolis.

"She is careful, she is measured, she is serious," Cruz said. "She doesn't get overly excited, she doesn't get rattled by whatever is thrown at her."

The Texas senator acknowledged that it's unusual to make such an announcement so early, especially before July's Republican National Convention in Cleveland.

He said he's making the announcement now so that voters in states that have not yet held their primaries know what they will get.

Fiorina said she was "very proud, very humbled and honored" to accept Cruz's offer. She said that Trump and Hillary Clinton would both be "disastrous for this nation."

"Donald Trump and Hillary Clinton are two sides of the same coin," she said. "They're both liberal. We know that."

Fiorina then began singing a song from the podium to Cruz's daughters.

Cruz said Carly often makes up songs to sing to his daughters Caroline and Catherine and texts with them with "heart and smiley-faced emoticons."

In the morning, Cruz teased the news, saying he had a "major announcement" to make later in the day. This comes just two days after a source close to Fiorina, the former CEO of Hewlett-Packard, confirmed to CBS that Cruz was vetting her as a vice presidential candidate. This also comes ahead of Indiana's primary on Tuesday.

Donald Trump called Cruz's decision "a pure waste of time" in a statement before the announcement.

Fiorina endorsed Cruz last month. Cruz has decided to team up with John Kasich to try and block Donald Trump from receiving the GOP nomination.

But the announcement comes a day after Donald Trump expanded his primary lead in the path to the nomination, sweeping all five states that held primaries on Tuesday. According to CBS News' latest count, Trump has 949 delegates, Cruz has 556 and Kasich has 152. A candidate needs 1,237 in order to win the GOP nomination.