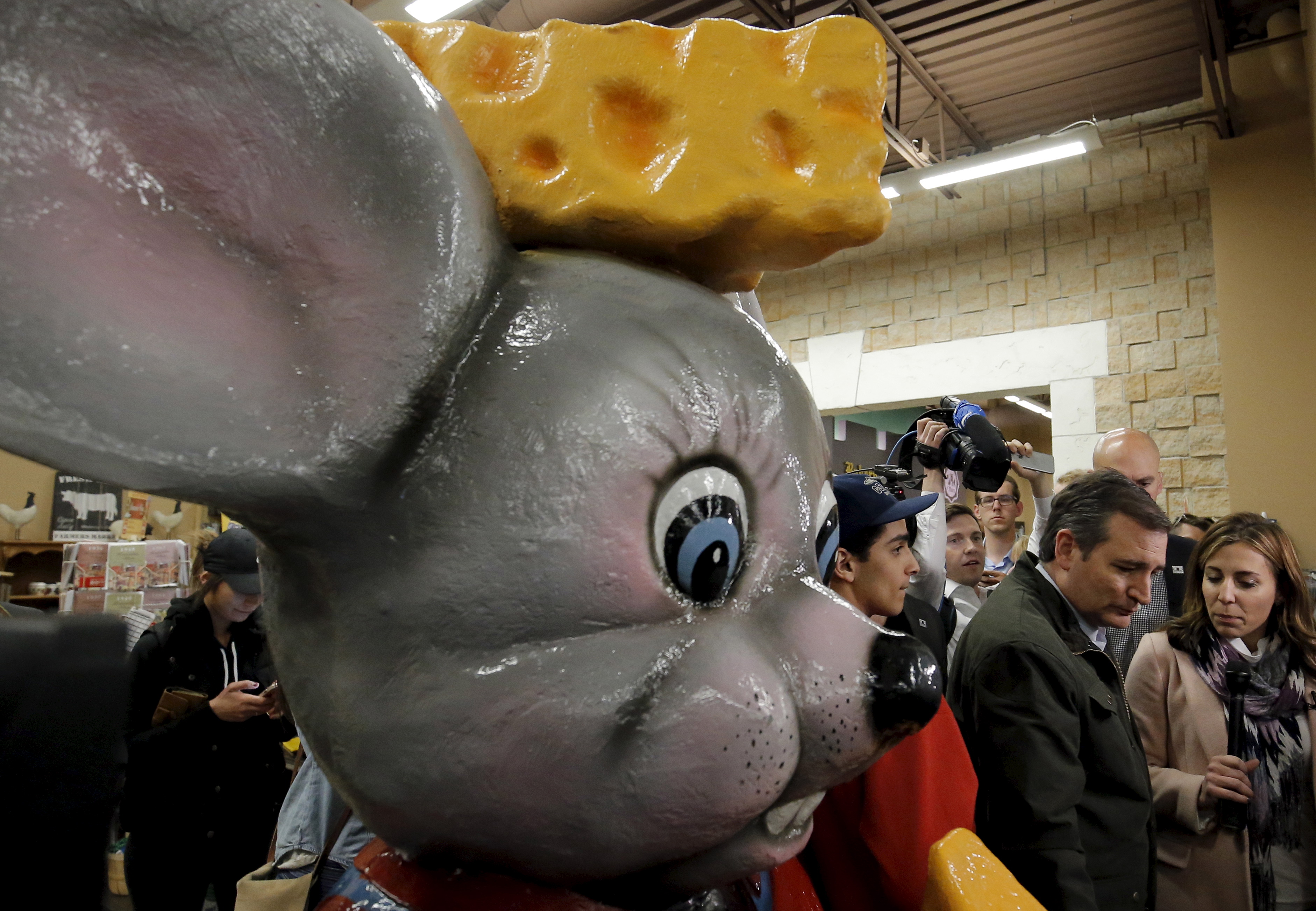 Kenosha, Wisconsin A day before the Wisconsin primary, Republican presidential candidate Ted Cruz found himself in cheese heaven on Monday at the Mars Cheese Castle in Kenosha, Wisconsin, which offers various cheese products from cheesy bread to cheese curds, which he cheerfully shared with the reporters following him. With victory in sight in Wisconsin and surrounded by his favorite food, Cruz was in good spirits, but there were limits.

As the candidate sampled cheesy bread and regaled reporters with the virtues of cheese at the deli counter in front of dozens of cameras, his seven-year-old daughter Caroline walked up wearing a cheesehead. In a mischievous moment, she took off the iconic piece of Wisconsin headgear and began to reach over to put it on her dad's head. And without batting an eye, Cruz took it off before she could crown him with it.

What could a self proclaimed cheese lover possibly have against the iconic cheesehead? Cruz explained to reporters the "iron-clad rule of politics, which is -- no funny hats."

He continued, "And any hat is, by definition, defined as a funny hat. Michael Dukakis demonstrated that powerfully when he put on a helmet and rode in a tank. So I will cheer on the hats of others but I think the people of Wisconsin wear their cheeseheads so powerfully that I would not presume to intrude in the elegancy in which the people of Wisconsin wear those hats."

Reminded of talk of being a "courageous conservative" by a reporter, Cruz shot back, "not that courageous."

The eating tour continued in Milwaukee, but the theme changed to Italian, with another retail stop this time at Glorioso's Italian Market.

"I'm going to steal a little bite," Cruz said as he leaned down to his seven year old daughter Caroline who held a cup of gelato. "No you're not!" she shot back looking a little glum when he did in fact take a spoonful, as Mrs. Cruz watched and smiled. With the press gathered around them, the couple shared a kiss over a cup of raspberry gelato.

A reporter asked Cruz, "How's the Fit Bit working?" referring to the fitness tracking device that Cruz wears. The Texan joked, "Sadly it is a terrible thing on the campaign trail when your on the bus whole time somehow walking from the front to the back of the bus doesn't give you very many fit bit steps." Heidi chimed in, "But it's good for your core!"

Holding a platter of cheese at the fourth or fifth food sampling station of the day, the senator told the journalists with him, "I'm trying to fatten you guys up. If you're sort of in a food coma, it'll calm the ravages of the press corps. Other campaigns use ropes -- we feed you sorbet, gelato."

The food jokes continued as Cruz and his entourage were walking out the door. Another reporter shouted, "Are you for arming the cheese curds?"