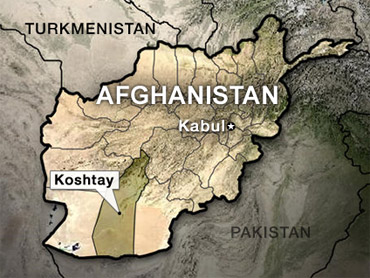 We were sitting in the shade of some mulberry trees on the edge of Koshtay village when I met a man who had never made a telephone call in his life, and didn't know how to use a telephone.

His name was Sher Mohammed Khan, and he is an influential local elder. He, along with about 60 other elders, had assembled under the mulberry trees for a shura - or meeting - with the U.S. Marine officers responsible for security in their area.

With a handover from one battalion of Marines to another -Second Battalion, Second Marine Division (2/2)  to the Third Battalion, First Marines (3/1) - it was important for the local Afghan leaders to meet the incoming Marines.  They all sat on a long roll of blue carpet under the mulberries, as one man after another stood up to talk about the importance to cooperate to keep the Taliban out of their area and the various needs they had in their communities.

After stressing the need for more security, most of the men said they wanted schools refurbished and reopened. In many parts of Helmand no real schools have functioned since the Soviet invasion three decades ago. Some children received a rudimentary and fragmented education in the local mosque, but still around three quarters of the population here can neither read nor write.

Sher Mohammed Khan was past middle age - he stood with difficulty, balancing on a walking cane, and his face was long and drawn after many years of hardship. He said his people needed a school, a clinic and better roads. But when I asked him if he also wanted cell phone service, he shook his head sadly. "Telephone? I don't know how to use one," he said. In many parts of Afghanistan today, cell phones have become the rage - people store music on them, and photographs, and occasionally they even receive calls if their local cell phone tower is working.

But the Taliban disapprove of cell phones. They think music is corrupting and ban it in areas they control, and they also suspect - rightly - that some villagers use cell phones to inform on them. They blow up cell phone towers where they can. In this part of southern Helmand which had been under complete Taliban control until several months ago, the cell phone companies haven't even dared to come down and try to put up any towers yet.

And of course there are no landlines either - so Sher Mohammed Khan has yet to make a phone call. I told him that cell phones can be very addictive, and when cell phone service comes to his area he might find that he too would want a phone. He laughed delightedly at the idea, and shook my hand warmly. And I imagined him bellowing into a small handset in his Pashto language "Can you hear me now?"