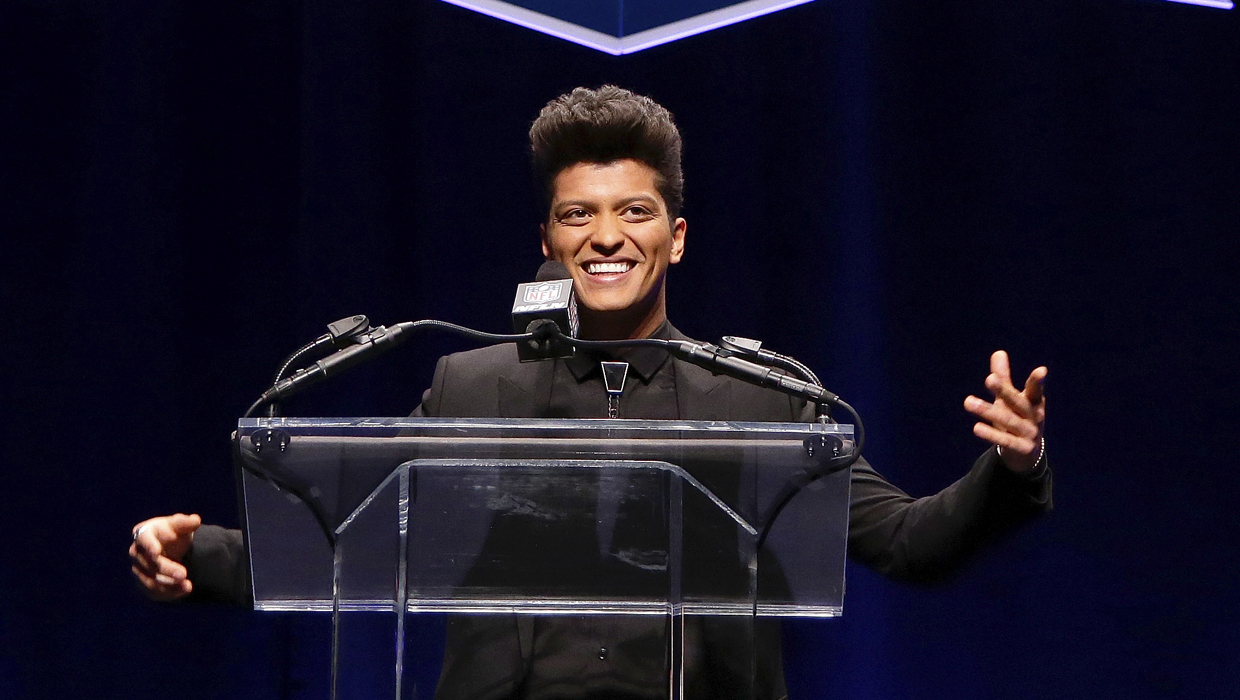 In case you hadn't heard, there’s a little football game happening this weekend.

Super Bowl XLVIII kicks off Sunday evening at MetLife Stadium in East Rutherford, N.J., and as sports fans pull on their jerseys and get ready to watch the Denver Broncos take on the Seattle Seahawks, celebrities are also gearing up for the big game.

Opera singer Renee Fleming will sing the national anthem prior to Sunday’s kickoff, and Bruno Mars will take to the stage at halftime with the Red Hot Chili Peppers.

The "NFL is such a prestigious stage...that they give the new guy a shot, and I'm so grateful for that," Mars said at a press conference Thursday. "I haven't been able to take it in. Not yet. Come Sunday, I will."

And, of course, there will be plenty of celeb-packed parties happening this weekend.

The floating Bud Light Hotel played host to performances by Run DMC, Busta Rhymes and The Roots on Thursday night. Others set to perform there through the weekend include Imagine Dragons on Friday, Foo Fighters and the Zac Brown Band on Saturday and Fall Out Boy and Jake Owen on Sunday.

Actors Kellan Lutz, Katrina Bowden and Bryan Greenberg started their Super Bowl weekend with a workout, attending a Flywheel celebrity ride at the spin studio's pop-up at the NFL House on Friday morning and sharing photos from the event.

Maxim magazine will also have a performance by Kendrick Lamar at its Super Bowl party Saturday night at Espace in New York, and Nick Cannon will host the Big Game Weekend Party that same night at Lavo nightclub.

Sunday, of course is the big game, but the star-sightings won't stop there. Expect to see a number of celebs at the big game (or attending viewing parties), and on your TV at home in the form of this year's Super Bowl ads.

"While there are always celebrities in the game, I feel like there's even more of an emphasis on top A-list celebrities. You always had Kim Kardashian for Sketchers, the rapper Psy for pistachios. They're easier to get and of-the-moment and not of-the-moment a year later...But I feel like there's an emphasis on getting bigger names to do more interesting stuff," Variety's Brian Steinberg told CBS News. "This year you've got Stephen Colbert for pistachios...He's not really a spokesman or a pitchman, it's kind of a new area for him. You've got the Muppets doing something. You've got Scarlett Johansson for SodaStream and you've got Arnold Schwarzenegger and Don Cheadle for Budweiser -- bigger names than you're used to seeing."