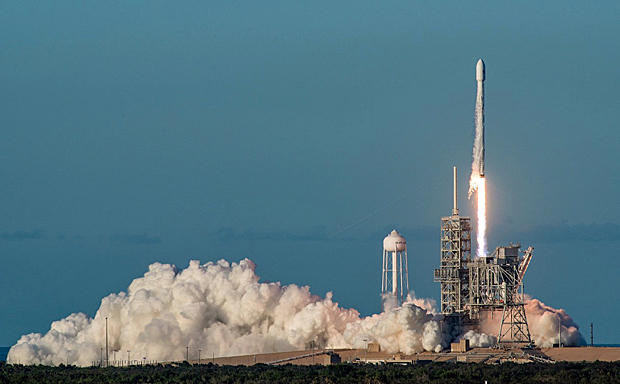 After last-second delays Sunday and Monday, a SpaceX Falcon 9 rocket finally roared to life and streaked away from the Kennedy Space Center Wednesday evening, boosting a high-power Intelsat communications satellite into orbit in the California rocket builder's third flight in less than two weeks.

The launching capped a particularly intense few days for SpaceX, beginning with the successful recovery of a Dragon cargo ship that splashed down early Sunday in the Pacific Ocean, bringing back more than 4,100 pounds of experiment samples and other equipment after a month-long visit to the International Space Station.

With the Dragon safely back on Earth, company engineers in Florida attempted to launch the Falcon 9 that evening only to be stopped at the T-minus 10-second mark because of a guidance and navigation system glitch. A second attempt Monday also was aborted at the 10-second point because of an unrelated problem.

SpaceX founder Elon Musk ruled out a July Fourth launch attempt, instead ordering company engineers to spend the holiday reviewing telemetry and critical systems because, as he tweeted, "only one chance to get it right."

The Falcon 9 was cleared early Wednesday for a third launch try and this time around, it was clear sailing and the 229-foot-tall rocket thundered to life at 7:38 p.m. EDT (GMT-4) and climbed away from historic pad 39A at the Kennedy Space Center atop 1.7 million pounds of thrust.

Mounted in a protective nose cone at the top of the rocket was the Boeing-built Intelsat 35e communications satellite, the fourth in a series of all-digital relay stations, this one bound for an orbital slot 22,300 miles above the Atlantic Ocean to provide service to the eastern United States, the Caribbean, western Europe and Africa.

Trailing a plume of fiery exhaust visible for miles around, the Falcon 9 quickly accelerated as it consumed propellant and shed weight, arcing to the east over the Atlantic Ocean and putting on a spectacular sunset show before fading from view

About two minutes and 46 seconds after liftoff, the first stage fell away and the single engine powering the rocket's second stage ignited to continue the push to orbit.

Unlike the three most recent Falcon 9 flights, no attempt was made to recover the rocket's first stage, which was not equipped with landing legs or steering fins. Because of the weight of the Intelsat payload -- nearly 15,000 pounds -- and the high-altitude demands of its orbit, the first stage consumed virtually all of its available propellant, leaving no reserves for a landing try.

Instead, the spent stage simply fell back into the atmosphere to break up on the way to ocean impact.

So far this year, SpaceX has launched 10 Falcon 9s and recovered seven booster stages, three at the Cape Canaveral Air Force Station and four on off-shore drone ships. No attempt was made to recover the other three stages due to the payload weights and trajectories, including the one launched Monday.

A few minutes later, the Intelsat 35e Epic spacecraft was released into a so-called transfer orbit. SpaceX's contract with Intelsat guaranteed a minimum apogee, or high point, of at least 19,405 miles and a low point of around 135 miles.

The actual orbit depended on the precise performance of the Falcon 9. The goal was to use up all of the available propellant in both stages and the apogee may have been significantly above the contracted minimum.

Whatever the actual numbers, on-board thrusters will be used to put the relay station into a circular orbit 22,300 miles above the equator where all such comsats operate. At that altitude, satellites take 24 hours to complete one orbit, thus appearing as stationary targets for antennas on the ground.

Company officials would not disclose the exact cost of the Intelsat 35e satellite, saying only that spacecraft in the EPIC series run between $300 million and $425 million each and that the launching was fully insured.

The Intelsat 35e spacecraft is equipped with C-band and Ku-band wide and spot beams to provide high-speed communications services primarily to wireless customers across Latin America, Africa and the Caribbean, including cruise ships, with a dedicated Ku-band system for direct-to-home television in the Caribbean.

Ken Lee, vice president of space systems for Intelsat, said the spacecraft's all digital equipment is unique in the industry.

"As you recall from the old cellphone days, you used to have analogue phones, now we have all digital phones with so much more capability," he said in an interview with Spaceflight Now and CBS News. "Even though it's (state-of-the-art) technology, it's also backwards compatible. So our existing customers do not have to change their equipment to utilize our system."

Lee said Intelsat satellites are generally too heavy for the current version of the Falcon 9 rocket and no other SpaceX launches are currently planned. But he said Intelsat considers SpaceX "a viable option for us, and we'll engage them. If the payload works out right for them, then we don't have any reservation using SpaceX."

He also said he supports SpaceX's drive to lower launch costs by recovering, refurbishing and relaunching spent stages, adding that he expects the cost of a used stage to continue dropping as SpaceX perfects recovery procedures and techniques. But that doesn't mean Intelsat is ready to fly on a previously-flown rocket.

"I am convinced that a reusable rocket sytem is a viable option in the future," he said. "I am not convinced, today, that we are willing to get on the rocket. Having said that, as they demonstrate their successes, and of course it comes with a price in schedule assurance and quality, if all those terms are correct then we'll definitely consider that in the future."

This was the 38th launch of a SpaceX Falcon 9 rocket, the 10th so far this year and the ninth from pad 39A at the Kennedy Space Center. SpaceX's next launch is a Dragon space station resupply mission scheduled for takeoff Aug. 10.