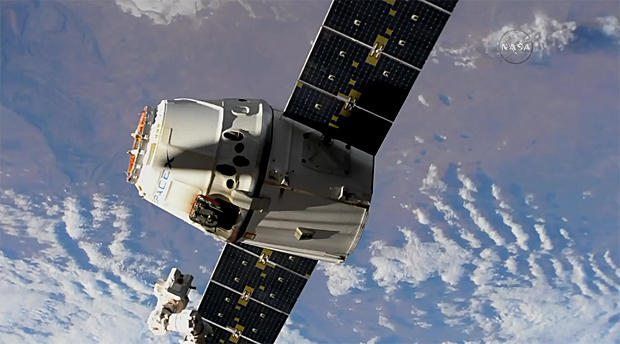 A SpaceX Dragon cargo ship loaded with more than 4,100 pounds of experiment samples, no-longer-needed equipment and other gear departed the International Space Station and returned to Earth Monday, splashing down in the Pacific Ocean southwest of Long Beach, Calif., to close out a month-long flight.

"Good splashdown of Dragon confirmed -- completing first re-flight of a commercial spacecraft to and from the @Space_Station," the company tweeted just after 8:15 a.m. ET (GMT-4).

After unloading the Dragon, the station crew re-packed it with experiment samples, broken components and other no-longer-needed gear. Hatches were sealed and the station's robot arm detached the Dragon from the Earth-facing port of the forward Harmony module on Sunday.

Early Monday, astronaut Jack Fischer, operating the arm, released the cargo ship to fly on its own and about five hours later, the spacecraft fired its braking rockets and plunged back into the atmosphere, creating a blazing trail visible from the station.

Fischer tweeted a photograph, saying "beautiful expanse of stars -- but the 'long' orange one is SpaceX-11 reentering! Congrats team for a successful splashdown & great mission!"

A SpaceX recovery crew was standing by in the splashdown zone to haul the capsule back to port where its high-priority experiment samples will be unloaded and delivered to researchers.

With the Dragon safely back on Earth, SpaceX engineers and technicians at the Kennedy Space Center continued preparations to ready a Falcon 9 for launch at 7:37 p.m. to boost an Intelsat communications satellite into orbit. A launch attempt Sunday was aborted at the T-minus 10-second mark because of an out-of-limits reading in the rocket's guidance and navigation system.