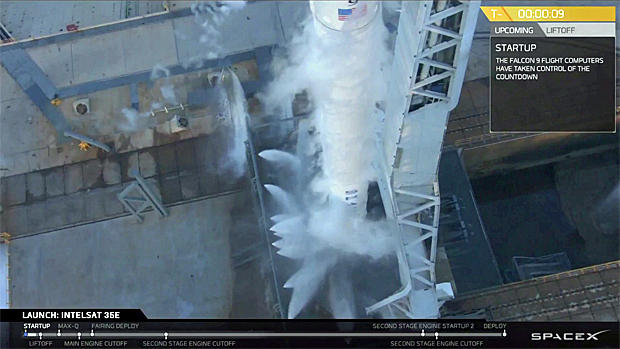 The launch of a SpaceX Falcon 9 rocket carrying a powerful communications satellite was called off just 10 seconds before blastoff Sunday because of an apparent glitch in the rocket's guidance and navigation system. SpaceX planned to make a second attempt Monday, assuming the problem can be fixed in time.

The California rocket builder was trying to launch its third Falcon 9 in just nine days following the successful launches of a Bulgarian communications satellite from the Kennedy Space Center on June 23, following by the launch of 10 Iridium NEXT telephone relay stations from Vandenberg Air Force Base, Calif., two days later.

Back at the Florida spaceport, expected cloudy weather never developed and SpaceX was counting down to a planned 7:36 p.m. ET Sunday liftoff when the countdown abruptly halted at the T-minus 10-second mark. Engineers reported an apparent out-of-limits reading in the rocket's guidance and navigation system.

Forecasters predicted a 60 percent chance of acceptable weather Monday for a planned launch at 7:37 p.m. ET.

The goal of the mission is to launch the Boeing-built Intelsat 35e communications station, the fourth in a series of high-power satellites, this one bound for an orbital slot 22,300 miles above the Atlantic Ocean to provide service primarily to Latin America, the Caribbean and western Africa.