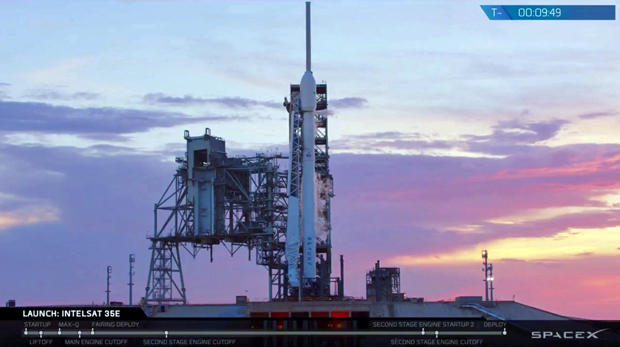 For the second day in a row, a SpaceX Falcon 9 rocket carrying an Intelsat communications satellite was grounded by a last-second glitch Monday, delaying the flight to at least Wednesday while engineers carry out a detailed review.

SpaceX initially held out hope of a Fourth of July launch try, but company founder Elon Musk decided more time was needed to make sure the rocket was ready to go.

"We're going to spend the 4th doing a full review of rocket & pad systems," he tweeted. "Launch no earlier than 5th/6th. Only one chance to get it right ..."

Monday's launch try came at the end of the window because of threatening weather. Conditions improved and countdown clocks were ticking down to blastoff at 8:35 p.m. EDT when telemetry indicated a problem. The countdown stopped at the T-minus 10-second mark and, with no time left for another try, the flight was scrubbed for the day.

A software issue with the rocket's guidance and navigation system triggered a launch abort Sunday at the same spot in the countdown. That problem was quickly resolved, SpaceX officials said, and it was not immediately known what caused Monday's abort.

The launch slip spoiled a holiday weekend doubleheader of sorts. Earlier in the day, a SpaceX Dragon cargo ship departed the International Space Station and wrapped up a month-long flight with an on-target splashdown in the Pacific Ocean southwest of Long Beach, Calif., bringing 4,100 pounds of experiment samples and other material back to Earth.

A SpaceX spokesman said engineers would sift through telemetry from the Falcon 9 to determine what went wrong and what might be required to fix it.

The goal of the 38th Falcon 9 flight is to put the Boeing-built Intelsat 35e communications satellite into orbit, the fourth in a series of high-power all-digital relay stations. This one is bound for an orbital slot 22,300 miles above the Atlantic Ocean to provide service primarily to wireless customers across Latin America, the Caribbean and western Africa.

The Day Vesuvius Blew its Top