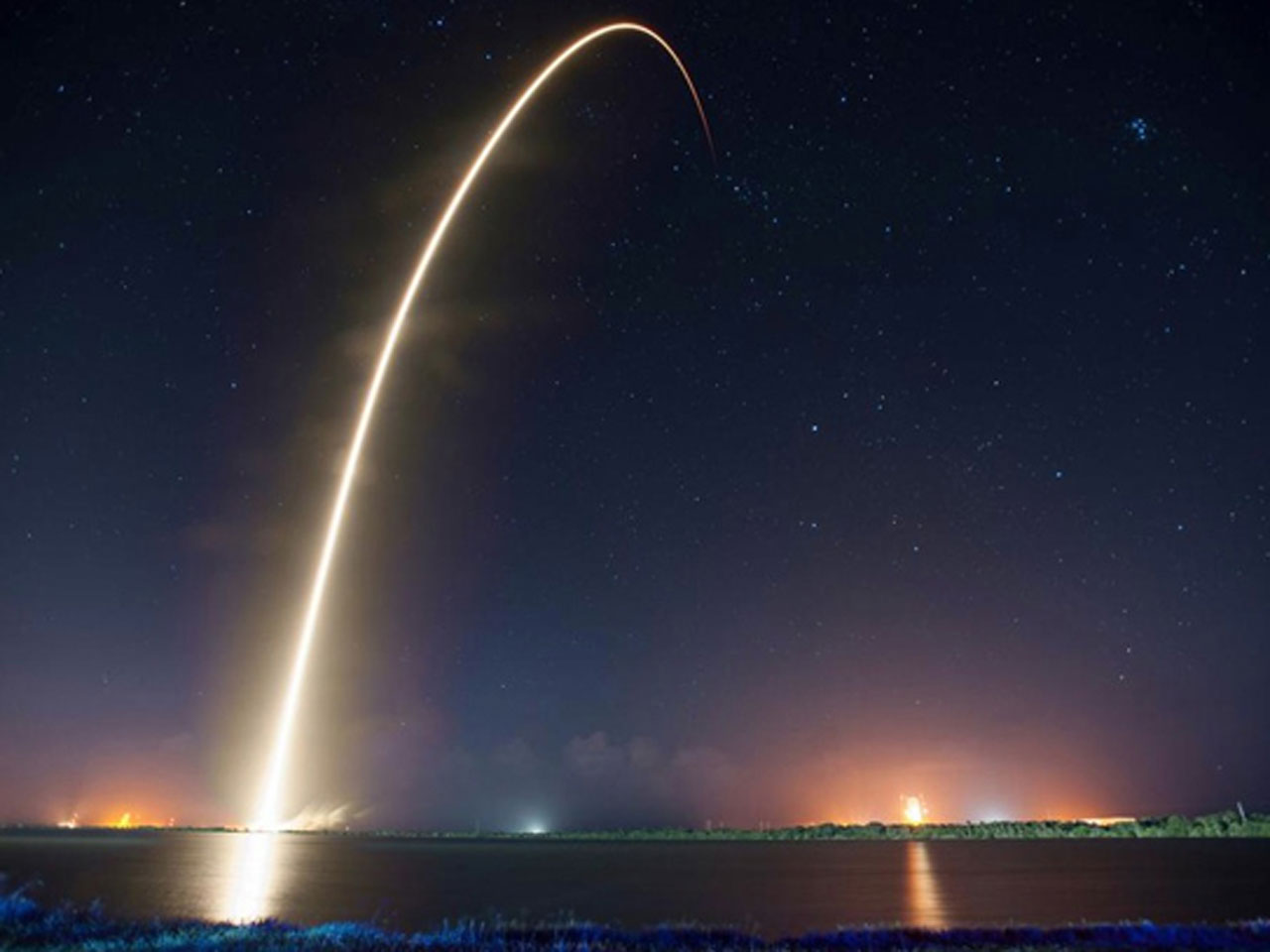 A SpaceX cargo ship packed with more than 5,100 pounds of equipment and supplies -- including 20 mice, a 3D printer, an environmental sensor to measure ocean winds and even an experiment that could lead to better golf clubs -- blasted off early Sunday on a two-day flight to the International Space Station.

Running a day late because of stormy weather Saturday, the 208-foot-tall Falcon 9 rocket roared to life at 1:52 a.m. EDT (GMT-4) and quickly climbed away from launch complex 40 at the Cape Canaveral Air Force Station, arcing away to the northeast directly into the plane of the space station's orbit.

The Falcon's nine Merlin 1D first stage engines appeared to perform smoothly, generating 1.3 million pounds of thrust to boost the rocket and its payload out of the dense lower atmosphere.

The first stage fell away just under three minutes after liftoff and the rocket's second stage, powered by a single Merlin engine, ignited to complete the trip to orbit.

The Dragon cargo ship was released into an initially elliptical orbit with a high point, or apogee, of about 224 miles and a low point, or perigee, of around 124 miles. A few moments later, the capsule's two solar arrays unfolded and locked in place.

"Nothing like a good launch," said Hans Koenigsmann, SpaceX vice president of mission assurance. "It's just fantastic. We worked very hard yesterday, and the weather wasn't quite playing along. Today it was beautiful, the weather cleared up in time, the rain dissipated and from what I can tell at first glance, everything was really perfect."

He said the Dragon capsule's thrusters were working normally and "from the SpaceX team, everybody's really happy, everybody's delighted. There's going to be a party!"

If all goes well, the Dragon's flight computer will carry out a carefully timed sequence of rocket firings over the next two days to catch up with the station in its roughly circular 260-mile-high orbit, pulling up to a point about 30 feet from the lab complex early Tuesday.

At that point, the capsule will go into stationkeeping mode and the lab's robot arm, operated by European Space Agency astronaut Alexander Gerst, will lock onto a grapple fixture to complete the rendezvous. The arm then will pull the Dragon in for berthing at the Earth-facing port of the forward Harmony module.

The spacecraft is expected to remain attached to the station until around Oct. 18, returning to a Pacific Ocean splashdown packed with some 3,800 pounds of experiment samples, station components and other no longer needed gear.

This is SpaceX's fourth operational Dragon flight under a $1.6 billion contract with NASA that calls for at least 12 missions to deliver some 44,000 pounds of cargo to the space station. Orbital Sciences holds a $1.9 billion contract for eight flights to launch about 40,000 pounds of cargo. Both contracts were awarded in a bid to make up for the lost cargo capability of the space shuttle following its retirement in 2011.

The SpaceX CRS-4 flight comes just 14 days after the company successfully launched a commercial communications satellite for AsiaSa and just five days after winning a $2.6 billion contract from NASA to develop a piloted space taxi to ferry astronauts to and from the station.

Boeing is designing its own crew capsule under a separate $4.2 billion contract and NASA hopes both companies will be ready for flights to the station by 2017, ending reliance on Russian Soyuz spacecraft.

As it turns out, the next Soyuz to carry an American astronaut is scheduled for launch next Thursday from the Baikonur Cosmodrome in Kazakhstan. Barry "Butch" Wilmore, Soyuz commander Alexander Samokutyaev and flight engineer Elena Serova plan to dock with the station six hours after launch. Standing by to welome them aboard will be Gerst, station commander Maxim Suraev and NASA flight engineer Reid Wiseman.

The Expedition 41 crew will face a busy month in October, unloading, re-packing and unberthing the Dragon capsule, capturing an Orbital Sciences Cygnus cargo ship and carrying out three spacewalks, two staged by NASA and one by the Russians. Another Dragon supply ship is scheduled for launch in early December.

The cargo for the current CRS-4 mission includes about a month's supply of food, clothing, spare parts and a wide variety of experiment hardware and equipment. The gear includes IMAX camera equipment, exercise equipment, a small satellite that will be used for tests of micro thrusters, a nitrogen/oxygen recharge system for the station's airlock and a sensor that will be mounted on the Columbus module to monitor ocean winds.

Also on board: two batteries that are needed for the station's NASA spacesuits. Two more batteries will be launched aboard the Soyuz.

The 20 mice, the first live animals launched by SpaceX, are part of two investigations. One is intended to simply test the animal life support equipment and the other will study how muscle atrophies in weightlessness and the role of a specific protein that may reduce that degradation. The results could help astronauts on long-duration missions as well as elderly or bed-ridden patients on Earth.

One payload that has generated widespread interest is an experimental 3D printer provided by Made In Space, a California company working with NASA. Agency project manager Niki Werkheiser said 3D printers could play crucial roles in future missions by allowing crews to print replacement parts and other components.

"So you can imagine how cool it will be to uplink or email a part to space instead of launching it," she said. "It's really a game changer."

3D printers work by building up three-dimensional objects layer by layer, following computer commands based on precise 3D modeling of the desired object.

"I think it's a certainty that NASA will reach the point of manufacturing replacement parts, manufacturing tools as needed and relying on those instead of, not in addition to, things that are brought from Earth," said Jeff Sheehy, senior technologist with NASA's Space Technology Mission Directorate.

"If we're really going to set up shop on Mars, we really can't afford to bring everything we need for an indefinite amount of time. We may do that for the first mission, but we need to get to the point where we can make things that we need as we go."