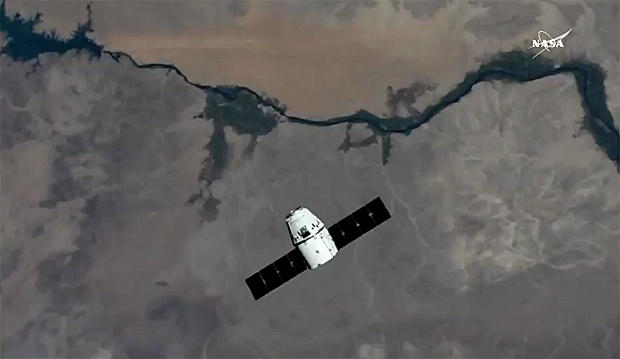 A refurbished SpaceX Dragon cargo ship loaded with 6,000 pounds of supplies and equipment was captured by astronauts operating the International Space Station's robot arm Monday to wrap up a two-day rendezvous.

The Dragon, making its second flight to the station -- a first for SpaceX -- pulled up to within about 30 feet of the station and then stood by while astronaut Jack Fischer, operating the robot arm from inside the multi-window cupola work station, locked onto a grapple fixture at 9:52 a.m. EDT (GMT-4).

"We want to thank the entire team on the ground that made this possible," Fischer said. "These people have supplied us with a vast amount of science and supplies."

Fischer noted that the Dragon's arrival came on the 15th anniversary of crewmate Peggy Whitson's first launch to the space station and said SpaceX had reached a new milestone by re-launching a previously flown cargo ship.

"The last time we had a return visitor to the ISS was STS-135 (the final shuttle flight) in July of 2011," he said. "We have a new generation of vehicles now, led by commercial partners like SpaceX, as they build the infrastructure that will carry us into the future of exploration."

With the Dragon secured, flight controllers at the Johnson Space Center in Houston took over arm operations, remotely pulling the Dragon in for berthing at the Earth-facing port of the station's forward Harmony module. Once precisely aligned, 16 motorized bolts in the common berthing mechanism drove home to lock the capsule in place.

Launched Saturday from the Kennedy Space Center, the Dragon is loaded with 3 tons of crew supplies, station hardware and science gear. The spacecraft's pressurized compartment, the section accessible to the station's crew, is packed with some 3,700 pounds of equipment and supplies, much of it devoted to medical and biological research.

Three payloads are mounted in the Dragon's unpressurized trunk section: an experimental roll-out solar array, a commercial platform that can support up to four Earth-observation instruments at a time and a suite of telescopes to study neutron stars. All three will be extracted later by the station's robot arm.

The station crew will unload the cargo ship in the days ahead and then repack it with 3,400 pounds of biological samples, no longer needed equipment and failed components being returned to Earth for engineering analysis.

Fischer and Whitson plan to unberth and release the Dragon July 2, setting up a fiery plunge to Earth and splashdown in the Pacific Ocean southwest of Los Angeles.

This is the 11th station resupply flight carried out by SpaceX under contract to NASA. The company plans two more cargo runs this year, one scheduled for launch Aug. 1 and the other on Nov. 1.

Why the Peach app is suddenly the hottest thing
William Harwood