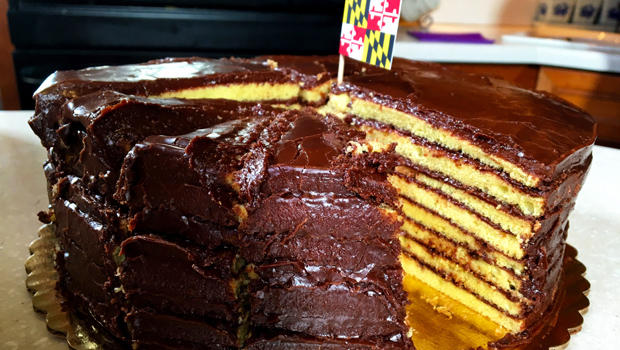 Cakes from one small American island are a tradition - you might call it a DESSERT ISLAND. With Rita Braver, we set sail:

Smith Island, reachable only by boat, is less than 10 miles off the coast of Maryland, but a world apart. British settlers first came here in the 17th century. Today, it’s a tranquil place, unless you happen onto the kitchen of Mary Ada Marshall, known as the Smith Island Cake Lady.

She makes no more than 10 cakes a day. “I like to keep it at six or seven,” she said, “because I don’t know what’s gonna wear out first, me or the oven.”

Marshall ships the cakes to customers on the mainland, but she has no website.

So how do they find out about her?

It is a labor-intensive process:  8-10 thin layers, each baked in its own pan, then carefully iced.  Marshall’s island roots go back countless generations, and like most women here, she learned to bake Smith Island Cake as a child.

But no one really knows how it all began: “I think it became a competition between the women of who could get the most little layers,” she told Braver.

And yes, the cake tastes as good as it looks! And when she started taking them up to the State Legislature, they voted Smith Island Cake the official Maryland State Dessert in 2008. “We were hollering like we won the Super Bowl!” Marshall said.

But the island has also suffered significant setbacks: coastline lost to erosion and rising sea waters; a once-thriving seafood industry now struggling; and a population that’s dwindled to around 200.

But cakes are on the rise, ever since a young Wharton Business School graduate happened to taste one.

Brian Murphy sampled one of Marshall’s cakes. Braver asked, “When did you go from saying, ‘This is really good cake,’ to ‘Let me see if maybe there’s a business here for me’?”

And so Murphy founded the Smith Island Baking Company in 2009.

He started by visiting the island and talking to Mary Ada Marshall: “And she says, ‘Brian, I love this idea. Can I pray for you?’  And I said, ‘You pray?’  And she says, ‘Honey, you can’t live in the middle of the Chesapeake Bay and not pray!’”

In fact, Murphy first opened the bakery right on the island, with an all-local staff. But after seven years, he moved across the water to Crisfield, Md., vexed by the island’s idiosyncracies. “The roof leaks, the power doesn’t work, the Internet doesn’t work, the bay freezes over,” he said.

But Murphy still regretted having to move. “Oh, it’s terrible, these are real people.”

The bakery still employs any original Smith Islanders who wanted to stay on.

And how do you know whether a Smith Island Cake tastes good or not?  “When there’s none left,” one worker laughed.

But though Mary Ada Marshall wishes the bakery well, she wonders whether it’s still a Smith Island cake if it isn’t baked on Smith Island.

“It’s just our dessert, plain and simple,” she laughed.”