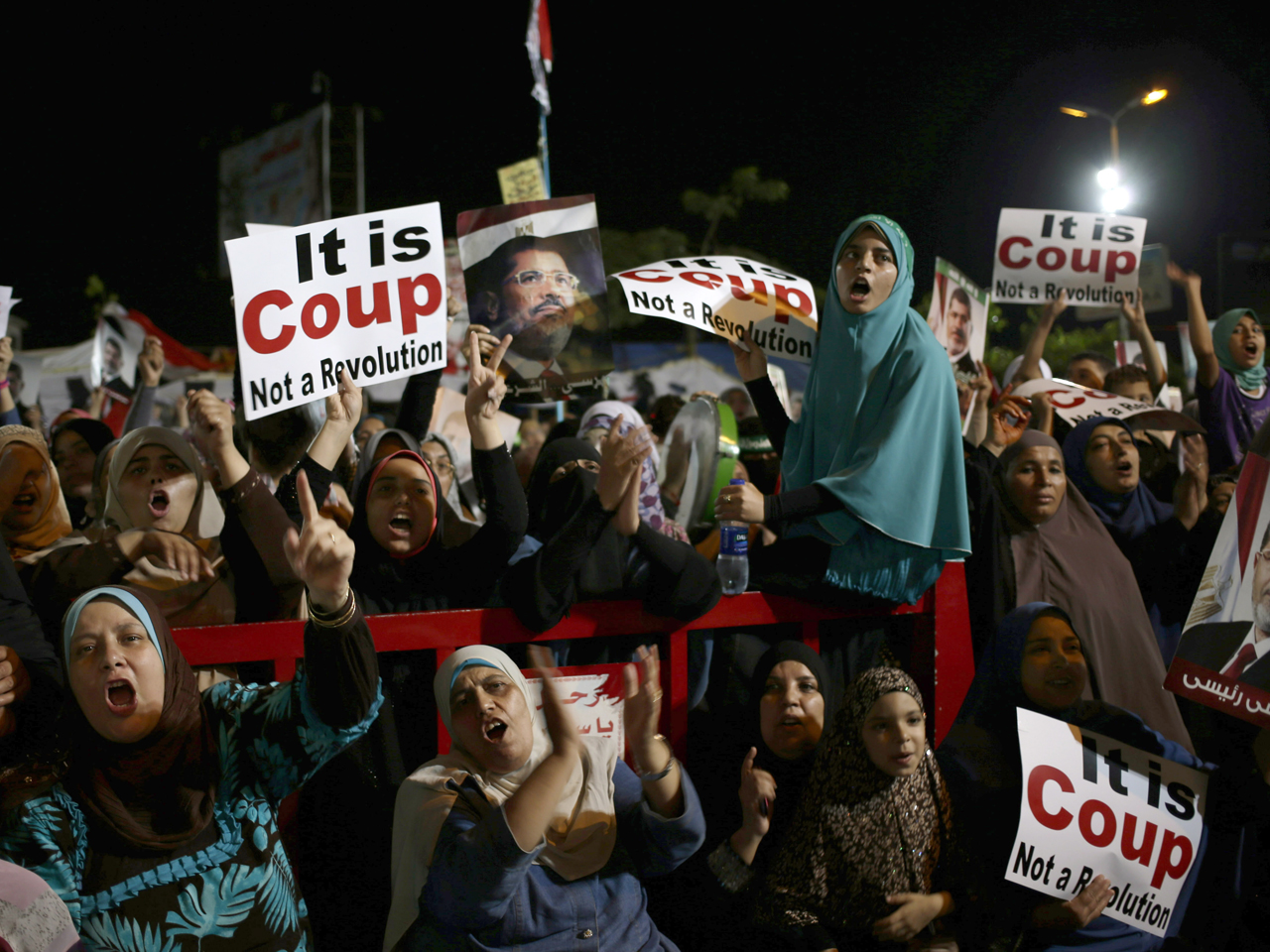 CAIRO Egyptian police detained two leaders of a Muslim Brotherhood-allied party in the latest in a wave of arrests of prominent Islamists, while the European Union's top diplomat held talks Monday with officials in Cairo in an attempt to mediate an end to the country's crisis, officials said.

All eyes are now on the Islamist protest camps where demonstrators have been demanding the restoration of the Morsi presidency, reports CBS News correspondent Clarissa Ward.

Egypt's interior minister said these camps must be dismantled. The question now is not if, but when it will happen.

Morsi supporters say they will not leave, they will face down tanks, and they will even give up their lives to demonstrate freely.

The government here has really ratcheted up its rhetoric, talking about fighting a war against terrorism. The Muslim Brotherhood is calling for a million-man march Tuesday. Many worry this is just setting the scene for more bloody confrontations.

EU foreign policy chief Catherine Ashton's visit to the Egyptian capital is her second since the army ousted Islamist President Mohammed Morsi on July 3. The trip underscores the alarm felt in the West over the violence that has killed more than 260 people and all but dashed hopes of political reconciliation in the deeply divided country.

The bloodiest incident took place over the weekend, when security forces killed at least 83 Morsi supporters in clashes in Cairo. Human Rights Watch and field doctors interviewed by The Associated Press said many of the dead were killed by gunshots to the head and chest.

Security officials said Monday that a police captain died of wounds sustained during those clashes after being hit in the eye with birdshot from protesters. The officials spoke on condition of anonymity because they were not authorized to brief the media.

The weekend clashes, which the Brotherhood has described as a "massacre," came after millions took the streets to show their support for Defense Minister Gen. Abdel-Fattah el-Sissi. The mass turnout followed a call from el-Sissi for rallies to give him a mandate to deal with violence and "potential terrorism" - a thinly veiled reference to expected crackdowns on Morsi supporters who are holding sit-in camps in Cairo.

The military pushed Morsi from power after days of mass protests by millions of Egyptians demanding that the president step down after a year in office.

The Brotherhood, from which Morsi hails, denounces the coup and has vowed to keep up its rallies until he is reinstated. The group has called for rallies outside security facilities on Monday evening during which they plan to carry empty coffins as a symbol of their dead. They have also called for mass protests Tuesday under the banner "Martyrs of the Coup," and have set up a tent a block away from their main sit-in to collect donations for those killed over the weekend.

The Interior Ministry has vowed to take decisive action against anyone who violates state property, referring to the protesters efforts to expand their encampment.

Egypt's authorities have rounded up several Brotherhood leaders and other prominent Islamists since Morsi's ouster. The circle of those in custody expanded late Sunday after authorities arrested two figures from the Brotherhood-allied Wasat Party and took them to the capital's Tora prison.

Security officials said that Abul-Ela Madi and Essam Soltan, who faced arrest warrants linked to allegations of inciting violence, were found hiding in a home in a Cairo neighborhood located near the main protest site of Morsi's supporters.

The party condemned the arrest of its leaders, saying such measures exacerbate the crisis and add new obstacles to efforts to build bridges.

Morsi himself has been held incommunicado by the military since his ouster. Last week prosecutors announced they had launched an investigation into the ousted president on charges of murder and conspiring with the Palestinian militant group Hamas to carry out an attack on a prison during the 2011 uprising against autocrat Hosni Mubarak. The jailbreak allegedly led to the deaths of inmates and broke Morsi and around 30 other members of the group out of detention.

In a bid to try and mediate a solution to the crisis, the EU's Ashton has planned meetings with both sides Monday. She met with el-Sissi, Foreign Minister Nabil Fahmy as well as Vice President Mohamed ElBaradei. Her office said in a statement she was also to meet with interim President Adly Manour.

The Brotherhood's political wing says four of its members and Morsi's ex-prime minister, Hesham Kandil, are holding talks with Ashton as well.

While the Brotherhood and its Islamist allies have rejected the new political order, the military-backed interim leadership is pushing ahead with a fast-track transition plan to return to a democratically elected government by early next year.

In a statement before arriving to Cairo, Ashton said she is going to speak to all sides to reinforce that "there must be a fully inclusive transition process, taking in all political groups, including the Muslim Brotherhood."

"I will also repeat my call to end all violence. I deeply deplore the loss of life," she said.

Divisions between pro- and anti-Morsi camps have played out in nearly daily street battles, with a dozen homes catching fire in Cairo late Sunday. Security officials said that no one was injured when the ousted president's supporters threw firebombs from atop a main overpass onto homes and opponents below.

Security officials said Monday that 11 bodies with signs of torture have been found in areas around the two pro-Morsi sit-ins in Cairo. Another 10 people have reported being tortured and accused of being spies by the protesters there.

All officials spoke anonymously because they were not authorized to speak to the media.