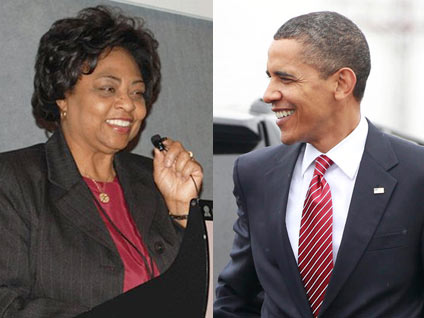 Former USDA employee Shirley Sherrod, who was fired over an out-of-context video of remarks she made about race posted to a conservative website, spoke with President Obama over the phone early this afternoon.

"The President reached Ms. Sherrod by telephone at about 12:35. They spoke for seven minutes," the White House said. "The President expressed to Ms. Sherrod his regret about the events of the last several days. He emphasized that Secretary Vilsack was sincere in his apology yesterday, and in his work to rid USDA of discrimination."

"The President told Ms. Sherrod that this misfortune can present an opportunity for her to continue her hard work on behalf of those in need, and he hopes that she will do so," according to the White House.

According to a CNN reporter who was present when the conversation took place, Sherrod said she invited the president to come visit her in southern Georgia. No word on whether Mr. Obama accepted the invitation.

"He expressed his apologies for the events of the last several days," Gibbs said, adding: "He thought she was very gracious."

Sherrod was reportedly "very pleased" with how the conversation went, according to CNN, and found the president to be easygoing. She confirmed that the president told her that Vilsack, who ordered her firing before reversing himself and offering her a new job, was very sincere in his apology.

An administration official told CBS News the president tried to reach Sherrod twice last night but was unable to leave a message. The official said Sherrod did not make any indication about whether she would accept the job offer during the conversation today.

The president made comparisons between his discussions of race in his books and Sherrod's comments in the wake of her firing, Sherrod told the CNN reporter, and brought up lawsuits put forth by black farmers against the USDA.

The two reportedly did not get into a discussion of any White House involvement in Sherrod's firing. Gibbs said at his press briefing that Mr. Obama did not invite Sherrod to the White House.

Sherrod requested that cameras not record the conversation.

Sherrod said the USDA pressed her to resign without listening to her side of the story or taking the time to review the remarks she gave to the NAACP. She said the USDA official who contacted her said she was acting at the behest of the White House.

Vilsack told reporters yesterday afternoon that he has offered a "personal and profound" apologyto Sherrod for forcing her to resign, stating that he will "have to live with that for a long, long time."

Vilsack said he offered Sherrod, who had been Georgia State Director of Rural Development, a new position at the USDA, though he declined to specify the nature of that "unique" position. Sherrod indicated to him that she wants time to consider his offer.

Earlier Wednesday, Gibbs apologized to Sherrod, stating that "a disservice was done" in her firing. Sherrod accepted the apology.

Calling the situation an "injustice," Gibbs said that "a lot of people involved in this situation, from the government's perspective on through, acted without all the facts."

At his briefing today, he said the situation reflects "a moment that I think provides us an opportunity to reflect and change." He said it will help both the White House and media make better choices and act less rashly in the future, and that there are lessons about both race and the media environment to take from the incident. At one point, he complained of a "reality TV culture."

Sherrod said Thursday on CBS' "The Early Show " that she would consider legal action against the conservative activist and blogger who posted the video that led to her ouster, Andrew Breitbart. (Watch in first video.)

Breitbart said on CBSNews.com's "Washington Unplugged" today that he stands by the video and said the NAACP was the target, not Sherrod. (Watch above.)

"This is an attempt to try to focus this on a likable person, Shirley Vs. Andrew, not about the NAACP's attempt with a willing media to try and frame the Tea Party as racist," he said.

He added that he believes "Shirley sees things through a racial prism."

Sherrod: I'd Like to Talk Race with Obama
Sherrod: I'd Consider Legal Action against Breitbart
Sherrod: Administration Too Sensitive to the Right
Sherrod Story Shows Ugly Side of 24-Hour News
Washington Unplugged: Analysis, Reaction
Vilsack: I Will Have to Live With My Mistake
Breitbart: Video Was Meant to Target the NAACP
Case Exposes Raw Wounds About Race
More Coverage in Hotsheet Blog