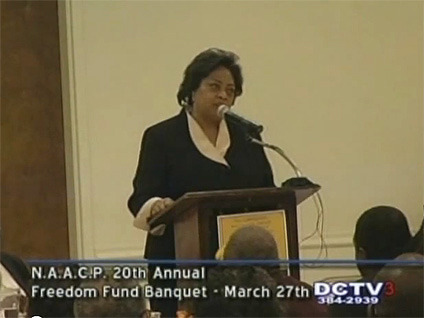 A high-ranking black employee of the U.S. Department of Agriculture has resigned after remarks she made about race were distributed by conservative web sites and aired on Fox News.

A video clip of Shirley Sherrod, the USDA's Georgia State Director of Rural Development, was circulated by conservative blogger Andrew Breitbart and his site, biggovernment.com, in which Sherrod talked of withholding help to a white man facing the loss of his family farm.

Agriculture Secretary Tom Vilsack released a statement Tuesday saying he had accepted Sherrod's resignation, and added that the department has no tolerance for discrimination.

The remarks was purportedly from a speech Sherrod gave at an NAACP Freedom Fund Banquet on March 27, 2010, in Douglas, Ga. The video clip has inflamed innumerable conservative bloggers and has lit up YouTube.

The news came a week after the NAACP and the Tea Party movement each became embroiled in accusations of racism and bigotry within the other group, and after a high-ranking Tea Party spokesperson was expelled by other movement officials after he published a blog about slavery that was deemed racist.

In a statement released Monday, NAACP President Benjamin Jealous said that the organization concurred with Vilsack accepting Sherrod's resignation, adding, "Racism is about the abuse of power. Sherrod had it in her position at USDA. According to her remarks, she mistreated a white farmer in need of assistance because of his race."

But in an interview with the Atlanta Journal Constitution, Sherrod said the clip doesn't tell the whole story. And indeed, it is a story that pre-dates her tenure at the USDA by more than two decades.

Sherrod is a graduate of Albany State University in Albany, Ga., with a masters degree in Community Development from Antioch University in Ohio. Beginning in 1985 she served as Director of the Georgia State Office for the Federation of Southern Cooperatives/Land Assistance Fund, which works to help family farmers retain and develop their property.

In the video clip (which you can watch at left), Sherrod is heard telling a story about a white man who came to her for help:

"The first time I was faced with having to help a white farmer save his farm, he took a long time talking, but he was trying to show me he was superior to me. I know what he was doing. But he had come to me for help.

"What he didn't know while he was taking all that time trying to show me he was superior to me was, I was trying to decide just how much help I was going to give him. I was struggling with the fact that so many black people had lost their farm land, and here I was faced with having to help a white person save their land. So I didn't give him the full force of what I could do. I did enough, so that when he - I assumed the Department of Agriculture had sent him to me, either that or the Georgia Department of Agriculture, and he needed to go back and report that I did try to help him.

"So I took him to a white lawyer that had attended some of the training that we had provided because Chapter 12 bankruptcy had just been enacted for the family farm. So I figured if I take him to one of them, that his own kind would take care of him.

"That's when it was revealed to me that it's about poor versus those who have. It's not so much about white -- It IS about white and black, because I took him to one of his own . . . "

The clip ends just as Sherrod has begun talking about a realization that it is class -- not race -- that is the issue, which is ironic given how Sherrod's critics are trying to take her remarks to prove racism exists.

What's more, Sherrod told the Journal-Constitution, the encounter she's relating occurred 24 years ago, long before she was a government employee. [Indeed, Chapter 12 bankruptcy, which she says in the video had just been enacted, was instituted for family farmers in 1986.]

Sherrod also told the paper that the video except did not include the full story of her relationship with the farmer, working with him for two years to help his fight off foreclosure and keep his land, and even becoming friends with him and his wife.

"And I went on to work with many more white farmers," she said. "The story helped me realize that race is not the issue, it's about the people who have and the people who don't. When I speak to groups, I try to speak about getting beyond the issue of race."

Sherrod told the paper the USDA forced her out of her position because "They were just looking at what the Tea Party and what Fox said, and thought it was too (politically) dangerous for them."

The Journal-Constitution, the Huffington Post and other media outlets have called for a release of the complete tape, in order to better judge the context of Sherrod's remarks. There is more recording available, as Breitbart has managed to release a second clip in which Sherrod discusses the paucity of black employees in government positions relating to agriculture.

Sherrod suggests it would be a good career move, even in hard economic times: "You've heard of a lot of lay-offs. Have you heard of anybody in the federal government losing their job?"