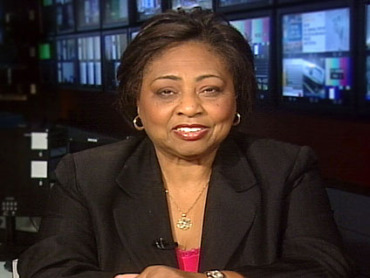 "This administration is definitely too sensitive to what the right is saying," Sherrod said in an interview this morning. "I definitely think the right has actually edited speeches that have been made to try and get their point over, when they know it's a lie."

The Department of Agriculture employee was asked to resign Monday after a conservative website released an edited video of remarks she gave at an NAACP conference. The edited video gave the impression Sherrod admitted to discriminating against a white farmer. Her full remarks, however, made clear she was relating a story from two decades ago -- long before she joined the USDA -- and that she ultimately learned an important lesson to disregard race.

Sherrod said yesterday that the USDA pressed her to resign without listening to her side of the story or taking the time to review the remarks she gave to the NAACP. She said the USDA official who contacted her said she was acting at the behest of the White House. The White House said it had no part in Secretary of Agriculture Tom Vilsack's decision to ask for Sherrod's resignation.

Today, Vilsack offered Sherrod a new job at the USDA. She said she was considering whether to accept it.

Before the media firestorm over her forced resignation, Sherrod said there was no sympathy from the USDA, for whom she worked in rural development.

"There was no concern for me as an individual," she told Crawford. "They were well aware of the work I had done at USDA."

The hasty decision to ask for Sherrod's resignation shows how much of an issue race still is in the nation, she said.

"Have we really changed? I was hoping that was the case," Sherrod said. "When you work on these issues so long you hope we can move from where we were to where we need to be, but we seem to be going backwards on this. I worry about my grandchildren and what race relations will be like when they grow up."

As the first black person in her position in the area of rural development, Sherron said she worked hard in order to help others, but also to represent President Obama, the first black president, well.

"I wanted to make him look good in the state of Georgia," Sherrod said, adding that she still supports the president and doesn't expect an apology from him.

She said the United States would be a "greater country" if it could get beyond racism, adding: "I don't know that it can be done from the top down. That's why I've worked so hard at the local levels."