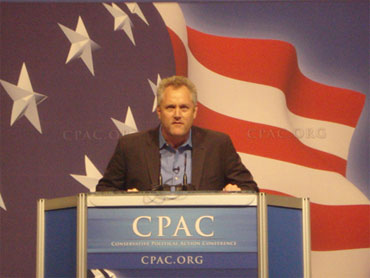 Conservative web publisher Andrew Breitbart, responsible for publishing the now-widely publicized footage of Shirley Sherrod giving remarks about race relations, says that he didn't intend to sabatoge Sherrod's career but instead take down the NAACP.

Department of Agriculture employee Shirley Sherrod was asked to resign Monday after Breitbart's website released an edited video of remarks she gave at an NAACP conference. The edited video gave the impression Sherrod admitted to discriminating against a white farmer.

Her full remarks, however, made clear she was relating a story from two decades ago -- long before she joined the USDA -- and that she ultimately learned an important lesson to disregard race. Breitbart has come under fire for releasing the out-of-context remarks; he says he distributed the video without seeing the footage of her full speech.

Sherrod was not the target, Breitbart said on ABC's "Good Morning America." Instead, the conservative intended to diminish the importance of the NAACP in retribution for their recent admonishment of elements of racism with the Tea Party movement.

"What this video clearly shows is a standard the Tea Party has not been held to," Breitbart says. "The NAACP, it shows the audience there applauding her when she discriminates against a white farmer."

He added, "When the NAACP is going to charge the Tea Party of racism, I'm going to show you the other side."

The NAACP initially released a statement condemning Sherrod's remarks and backing her resignation, but the group said yesterday it was "snookered" by Breitbart.

Eric Boehlert, a senior fellow with the watchdog group Media Matters for America, said on "Good Morning America" that Breitbart's actions amounted to a "smear campaign."

"If he had any decency he would apologize to Shirley Sherrod," Boehlert said. "And would stop with the incessant race-baiting that we've seen all summer."

One political commentator, Zennie Abraham, suggests Breitbart could be prosecuted for his actions.

"If Breitbart altered the video of Shirley Sherrod to make it look like she was making a statement he then called racist, he's certainly guilty of defamation of character against Shirley Sherrod," Abraham writes. "Breitbart may also be guilty of Internet harassment. He certainly should be made a high-profile example to discourage others from these uses of the computer and The Internet to harass a person. Enough is enough."

Andrew Sullivan of the Atlantic Magazine, however, says Breitbart is merely guilty of "reckless indifference to the truth."

"An apology would be in order, but the far right cannot apologize for anything because they are never wrong about anything," he says.

While many are decrying Breitbart's actions, he foreshadowed such aggressive moves at the Conservative Political Action Conference in Washington earlier this year.

The distrust which conservatives have of the federal government extends to mainstream media and academia, Breitbart said at the event, and he called for conservatives to "go on offense" against "elitists."

"Mainstream media, the gig is up," Breitbart said.