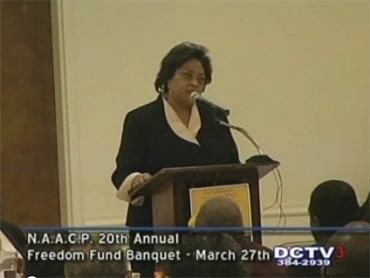 The Department of Agriculture employee who resigned after a controversy erupted over recent remarks she made is now saying that the White House forced her resignation.

Agriculture Secretary Tom Vilsack, however, is taking responsibility for the resignation, and the White House reportedly says it had no part in his decision.

"They called me twice," Sherrod told the AP, noting that she was driving when she received the calls. "The last time they asked me to pull over the side of the road and submit my resignation on my Blackberry, and that's what I did."

Sherrod submitted her resignation after she became the focus of scrutiny from Fox News and conservative blogs over remarks she gave at an NAACP Freedom Fund Banquet on March 27. A video of a portion of her remarks were posted on a conservative blog, giving the impression that Sherrod admitted to discriminating against a white farmer as an employee of the USDA.

The comments were taken out of context, however. In her remarks that day, Sherrod was recounting a story that pre-dates her tenure at the USDA by more than two decades. Sherrod says in her story that Chapter 12 bankruptcy had just been enacted; Chapter 12 was instituted for family farmers in 1986, while Sherrod was appointed to head the USDA's Rural Development office in Georgia just last July. Furthermore, the point of Sherrod's story is that race is not an issue.

Sherrod has said the video excerpt did not include the full story of her relationship with the farmer, with whom she says she became friends after helping him avoid foreclosure.

Nevertheless, Sherrod says the White House pressed for her resignation.

Earlier today, Vilsack released a statement saying he had accepted Sherrod's resignation, and added that the department has no tolerance for discrimination.

This afternoon, Vilsack released another statement saying he asked for Sherrod's resignation.

"First, for the past 18 months, we have been working to turn the page on the sordid civil rights record at USDA and this controversy could make it more difficult to move forward on correcting injustices," Vilsack said. "Second, state rural development directors make many decisions and are often called to use their discretion. The controversy surrounding her comments would create situations where her decisions, rightly or wrongly, would be called into question making it difficult for her to bring jobs to Georgia."

A White House official told CBS News that the White House did not pressure Sherrod or the Department, contrary to Sherrod's claims.

The NAACP on Monday released a statement condemning Sherrod's statements and saying the organization supported the USDA's position. The group said late Tuesday, however, that "We have come to the conclusion we were snookered by Fox News and Tea Party Activist Andrew Breitbart."