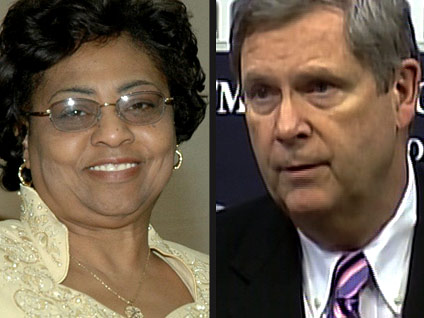 Agriculture Secretary Tom Vilsack told reporters this afternoon that he has offered a "personal and profound" apology to Shirley Sherrod for forcing her to resign as a result of an out-of-context video posted to a conservative website.

"I asked for Shirley's forgiveness, and she was gracious enough to extend it to me," Vilsack said, accepting "full responsibility" for forcing her to step down.

Vilsack said he offered Sherrod, who had been Georgia State Director of Rural Development, a new position at the USDA, though he declined to specify the nature of that "unique" position. Sherrod indicated to him that she wants time to consider his offer.

Vilsack was adamant that the decision to fire Sherrod was his and his alone, saying "the buck stops with me, as it should." He said he made a "very hasty decision which I deeply regret" and that he will "have to live with that for a long, long time."

"I did not think before I acted and for that reason this poor woman has gone through a very difficult time," he said. "This was my decision, and I made it in haste."

The agriculture secretary said the White House did not pressure him to make the decision to fire Sherrod or communicate with him about the matter, despite Sherrod's indication that a USDA official told her the White House wanted her to step down.

"I've learned a lot of lessons from this experience the last couple of days, and one of these things I've learned is that these kinds of decisions take time," he said.

In discussing why he wanted Sherrod to accept his offer to work in the USDA, Vilsack said she has "an extraordinary history of helping individuals in trouble." He said "she has a unique set of skills that I think would assist and help USDA in trying to turn the page in our civil rights chapter, which has been difficult."

Vilsack said he has not spoken to President Obama about the matter. Earlier Wednesday, White House press secretary Robert Gibbs apologized to Sherrod, stating that "a disservice was done" in her firing. Sherrod accepted the apology.

Calling the situation an "injustice," Gibbs said that "a lot of people involved in this situation, from the government's perspective on through, acted without all the facts."

"I think we live in a culture that things whip around, people want fast responses, we want to give fast responses, and I don't think there's any doubt is if we all look at this, I think one of the great lessons you take away from this is to ask all the questions first, and come to that greater understanding," he said. (Above, watch a discussion of the Sherrod controversy and an interview with Sherrod on CBSNews.com's "Washington Unplugged.")

Gibbs denied that the administration acted so quickly to fire Sherrod because it is "afraid" of conservative commentators or hypersensitive on issues of race. But Sherrod, speaking on CNN, maintained that "being so afraid of the machine that the right has put out there, that's what driving this."

Sherrod said yesterday that the USDA pressed her to resign without listening to her side of the story or taking the time to review the remarks she gave to the NAACP. She said the USDA official who contacted her said she was acting at the behest of the White House.