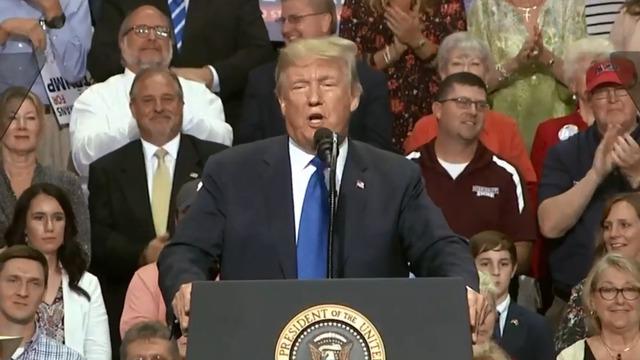 Senators are reacting to President Trump's comments Tuesday about Christine Blasey Ford, who has accused Supreme Court nominee Brett Kavanaugh of sexually assaulting her when they were both teenagers. Mr. Trump mocked Ford's performance in her Senate testimony last week, imitating her to laughter and applause.

Imitating Ford, Mr. Trump added, "But I had one beer -- that's the only thing I remember." At that point the crowd erupted in cheers and applause. Mr. Trump said of Kavanaugh, "A man's life is shattered" and opined of those who oppose him, "These are really evil people."

Some Democratic senators responded to Mr. Trump's words with strong condemnation. Nearly all the Democrats were likely to vote against Kavanaugh even before the allegation surfaced.

"This vile, mocking attack on a credible, immensely powerful, eloquent survivor of sexual assault is a mark of respect and disregard not only for Dr. Blasey Ford but the entire survivor community," Blumenthal said.

Some senators who are considered swing votes on Kavanaugh's confirmation, such as Republican Sen. Lisa Murkowski and Democratic Sen. Joe Manchin, have not yet responded to the comments.

The Republican senator from Maine is considered to be one of the critical swing votes in Kavanaugh's confirmation. Although she has voted against some of Mr. Trump's critical legislation, such as repealing and replacing the Affordable Care Act, she has voted in line with Republican judicial nominees nearly 99 percent of the time.

Flake, a retiring Republican senator from Arizona, is another key vote in Kavanaugh's confirmation. He spearheaded the effort to delay the floor vote on Kavanaugh for one week, so that the FBI could conduct an investigation into allegations against Kavanaugh.

"No time and place for remarks like that to discuss something this sensitive at a political rally is just not right. It was appalling," he said.

Graham has been a staunch supporter of Kavanaugh in the face of the allegations, and made news last week for chastising his Democratic colleagues on the Senate Judiciary Committee for their treatment of Kavanaugh. Graham said in an interview at the Atlantic Festival on Wednesday that while he thought Mr. Trump's comments were unhelpful, he did not necessarily disagree with the substance.

"Everything he said was factual. He's frustrated," Graham said of the president's comments. He said that Ford was treated more respectfully than other women who had previously accused political figures of sexual misconduct, such as Juanita Broaddrick's allegation of rape against President Bill Clinton in the 1990s.

"I don't like what the president said last night," Graham said, adding that he would tell Mr. Trump to "knock it off," although he called the comments a "factual rendition." Of Ford's testimony before the Senate, Graham said that she was "handled respectfully," but Kavanaugh was "treated like crap."