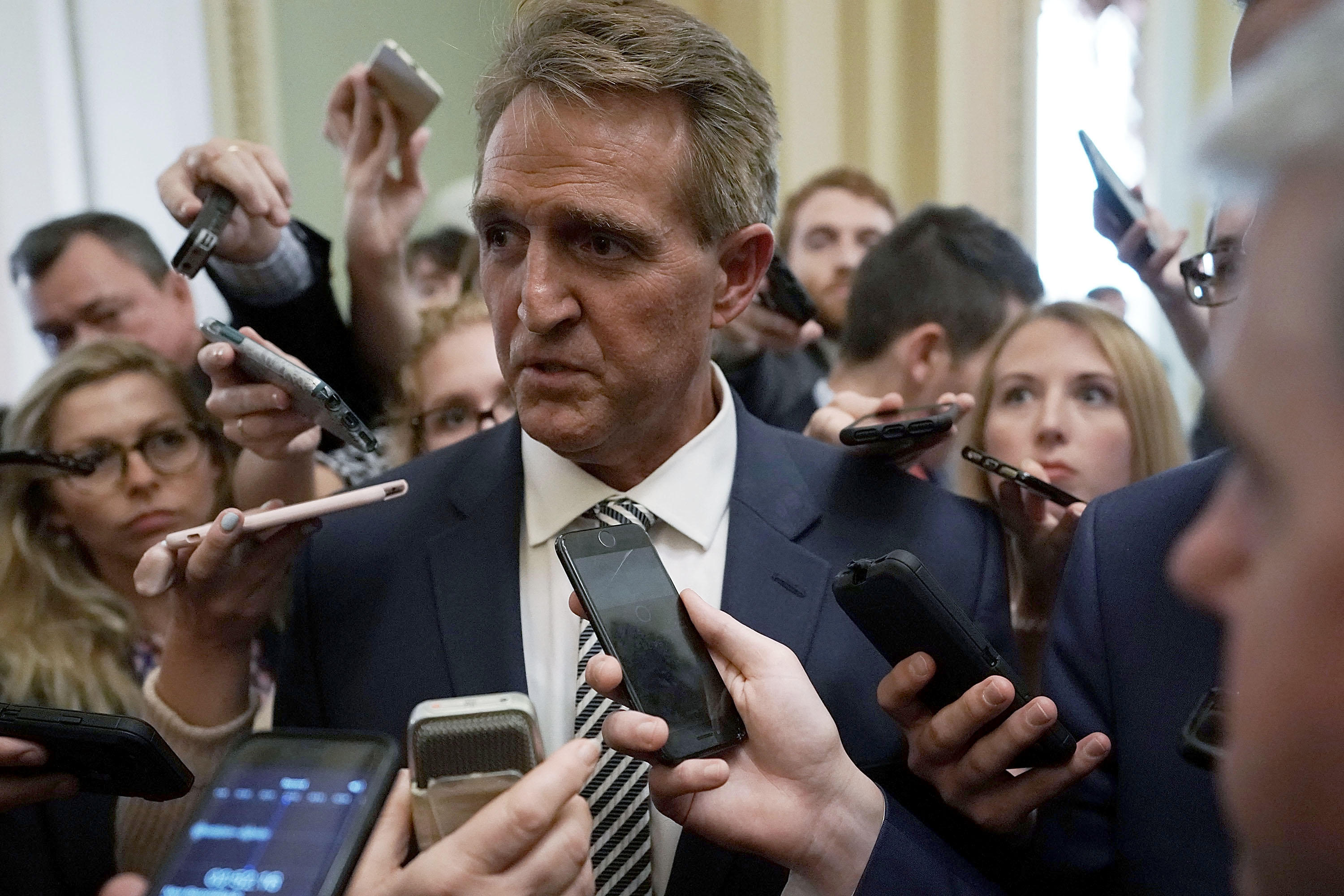 Arizona Republican Sen. Jeff Flake surprised his colleagues on both sides of the aisle when he called for a delay in the Senate floor vote on Supreme Court nominee Brett Kavanaugh's confirmation, after releasing a statement earlier that morning saying that he would vote to confirm Kavanaugh.

Flake, a member of the Senate Judiciary Committee, voted to advance Kavanaugh's nomination for consideration by the full Senate on Friday, but said that he would not approve a motion to bring the nomination forward without an FBI investigation into allegations of sexual misconduct by Kavanaugh.

Flake was joined by Republican Sen. Lisa Murkowski and Democratic Sen. Joe Manchin, both moderates, in calling for a week-long investigation. President Trump instructed the FBI to open an investigation into allegations against Kavanaugh on Friday.

Flake's decision came after he spoke to senators of both parties and withstood pressure from some Republicans not to take such a step. As he considered his course of action, Flake also had a conversation with Deputy Attorney General Rod Rosenstein, who is in charge of special counsel Robert Mueller's investigation. And, at the top of his mind was the previous day's testimony from Kavanaugh and Dr. Christine Blasey Ford, who has accused Kavanaugh of sexual assault when they were both teenagers.

Flake told reporters later in the day that while he had arrived at a decision about whether to support Kavanaugh, he was concerned about the process.

"Let me just say from the outset — Judge Kavanaugh, I agreed to support him before all of this came out. I wanted to support him — I'm a conservative. He's a conservative judge. But I want a process we can be proud of," Flake said, "I think the county needs to be behind it. And we need a more bipartisan process that's why this is important."

Before the vote: Flake confronted by protesters

After Flake voted Friday morning to schedule the vote to advance Kavanaugh's nomination for that afternoon, two protesters confronted him at a Senate elevator, holding the doors open to block him from leaving. One of the protesters spoke emotionally about her own experience with sexual assault, while Flake looked down, ashen-faced.

"I was sexually assaulted and nobody believed me. I didn't tell anyone and you're telling all women that they don't matter, that they should just stay quiet, because if they tell you what happened to them, you're going to ignore them," the protester said.

Conversations with other senators

Several senators on the committee spoke before the vote, including Sen. Chris Coons, D-Delaware, a close friend of Flake's in the Senate. The two are the same age, born just a few months apart, and also both serve on the Senate Committee on Foreign Relations, and the Subcommittee on Africa and Global Health Policy. The two have both spent significant time in Africa, and bonded over those experiences, and have traveled together.

Coons told CBS News' Nancy Cordes that he was surprised and disappointed when he learned Flake had released a statement saying he would vote to confirm Kavanaugh, unleashing an expletive in front of reporters when a reporter showed him the headline on a phone. Coons then reworked his planned speech to the committee, in part to appeal to Republicans like Flake who were on the fence about Kavanaugh's confirmation. In a measured speech to his colleagues on the committee, Coons condemned the rank partisanship that had infected Kavanaugh's confirmation process, and quoted his Senate predecessor and the former Judiciary Committee chairman, former Vice President Joe Biden.

He said that after he gave his speech to the committee, Flake called him to the anteroom outside the hearing room to talk about his decision.

"He said, 'Look, I'm really having trouble with this. I think this hearing is tearing the country apart. What you're suggesting is perfectly reasonable. I think we ought to be trying to find a way to have a one-week pause,'" Coons recounted. He also said that Flake expressed some trepidation about proposing such a pause to allow the FBI to investigate the Kavanaugh allegations. "'I'm really concerned that folks on your side just want to run this out indefinitely and hold it open and hold it open and hold it open, and then it'll just lead to more, more, more,"  And, you know, I'm very concerned about how will this be handled? How will people talk about it?'" Coons said that he and Flake "had about a 5-minute intense and somewhat personal conversation" about the proposal.

Coons said Flake asked to speak to Feinstein. Eventually, it became a scrum where "virtually every member of the committee" gathered in the anteroom. Flake later told reporters he met with Democratic colleagues and asked them, "What would cause you to say we have a better process?"

After talking with several senators for awhile, Flake "sort of kicked everyone out," and he and Coons talked individually in the phone booth for around 15 minutes.

Soon afterward, Flake said he wanted to speak to FBI Director Christopher Wray. He ended up talking with Deputy Attorney General Rod Rosenstein for what Coons estimated was about 10 minutes. Coons had left him alone for the conversation, but when he returned, Flake was no longer by himself.

"They had a long conversation. You know, by the time I got back 10 minutes later, there were three Republican senators and staff really beating on him, really leaning in and -- making their best arguments," Coons said about the scene before senators returned to reconvene in the hearing room. The vote started 20 minutes after it was scheduled.

Committee Chairman Chuck Grassley called the vote, and Flake voted to advance the nomination to the full Senate, as did all the other Republican senators. Eight Democrats voted against the motion, and two stayed silent in protest.

In addition to his Senate friends, Flake told reporters a few of his personal friends also recently admitted to him that they too were victims of sexual assault.

Later in the day, Flake admitted to reporters the culmination of all of these events ultimately convinced him.

"I knew...that people needed to be more comfortable moving ahead...and most of all that the country needs to feel better about this. This is ripping us apart," he told reporters.

With his mind made up and the assurances from the Democrats and the undecided senators to politically back this deal, Sen. Flake walked into the hearing room, whispered in Chairman Grassley's ear as he passed, and sat down in his chair where he announced the nomination shakeup.

Flake said the investigation period also soothed worries from both Murkowski and Sen. Susan Collins, two Republicans who have not announced if they will vote to confirm Kavanaugh.

Flake said that he had not discussed his decision with the president. He also assured reporters that Senate Majority Leader Mitch McConnell was not angry with his decision.

"Everyone agreed this is how to move forward," Flake said, adding that McConnell has agreed not to bring forward a motion to vote on Kavanaugh's confirmation until after an FBI report had been filed.

Flake, who has often been a vocal opponent of Mr. Trump, is set to retire at the end of this year.